An adjunct professor at Western Michigan University Cooley Law School, Stacey Dinser might be considered a bountiful giver.  It’s just something that comes naturally to her. It then is no surprise that her dedication and enthusiasm for teaching the law have resulted in her being honored with the 2018 Frederick J. Griffith III Adjunct Faculty Award.

The award is presented annually to an adjunct faculty member whose service best reflects the character and attributes of Rick Griffith, an adjunct veteran who taught at WMU-Cooley for over 20 years, until his untimely passing at the young age of 52. The award recognizes dedication to the law school, excellence in teaching, passion for persuasive advocacy, compassion for law students, and optimism about life and the future of legal education.

The mother of two special needs children, Dinser chose WMU-Cooley over any other because the law school offered the flexibility and financial assistance she needed in order to attend law school. 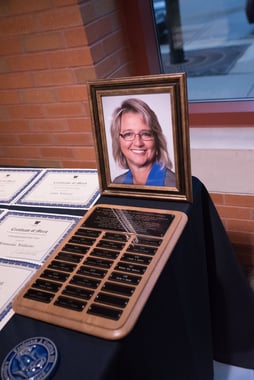 “I chose Cooley because it was the only law school that had a weekend program, which made it easier to raise my children,” Dinser recalled. “I was with my two sons during the week, and my husband at the time never worked weekends, so he took care of them while I attended class.

“Also, Cooley was the only law school that offered me a scholarship. And the year I matriculated there, Cooley had the highest bar passage rate in the state. These things made it the obvious choice for me.”

As a professor since 2000, Dinser sees being an adjunct as a way for her to help law students the same way she was helped during her studies.

“Cooley exposed me to most of what I would need to know for the bar exam, and gave me a clinical experience that helped me find my ‘professional self,’ ” Dinser said, adding, “I also have interns in my practice where I try to teach them how to be a lawyer, in addition to the classroom learning.”

One of the most important things she does for law students is teach them to write well because she sees writing as an intrinsic part of being a good lawyer. A well-regarded writer herself, Dinser says writing is key to success and respect.

“My students all know that I believe good legal writing skills are imperative to a successful career as an attorney,” Dinser acknowledged. “Most of what I do in a day is write. And as attorneys, we are often judged on our writing ability. Bad writers can lose credibility with the courts, other attorneys, and clients.”

Dinser also appreciates that adjunct professors are special because they practice the law all day for their clients and then spend their evenings instructing the lawyers of tomorrow. It takes a lot of love for the mission to do that year after year, like Dinser. 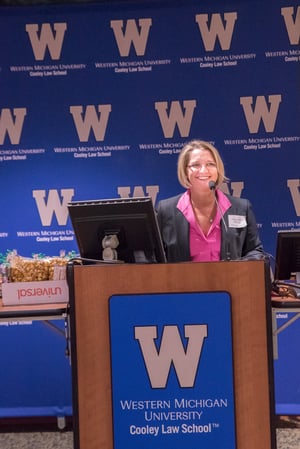 “We adjuncts fly under the radar. The full-timers don’t really get to see us,” said Dinser. “But all of us adjuncts go above and beyond. It’s a labor of love.”

In fact, it is exactly that “going above and beyond” that is the basis for the Griffith Adjunct Faculty Award. It’s the caring and giving outside the classroom, as well as inside, that helps to mold great lawyers. In many cases it manifests in long-term relationships between dedicated professors, like Dinser, and grateful students who become successful lawyers.

“The time I spend in the classroom with my students is the most enjoyable part of my day,” said Dinser. “I love being a part of these students’ lives. I have even been asked by some to swear them into the state bar. I give them my cell and my email, and we stay connected.”

A self-employed general practice attorney, Dinser’s areas of specialization include Family Law, Criminal Law, Juvenile Law, and Estate Planning. Although this work, combined with teaching, would be enough for many, Dinser is also dedicated to volunteering, both in the legal realm and outside it. For her, it’s all about fairness.

“I believe everyone needs quality legal representation, regardless of his or her financial situation; therefore, I have always done a substantial amount of pro bono work, Dinser explained. “I also often speak to large groups of law school students and recent graduates on the topic of starting their own law practices.”

As a mom with two now-grown special needs sons, Dinser wanted her boys to have fun like all kids, so she decided they should throw a party — the biggest and best party around! Every year since then, the big party has gotten bigger and bigger. Last year, 285 people came, and Dinser and another mom cooked, served and decorated for all of them.

“We have Santa come and there are a few folks in their 60s who come and they are really just 5-year-olds mentally, so they still want to sit on Santa’s lap,” said Dinser. “It really gets my holiday spirit going every year!”

Another volunteer opportunity Dinser has embraced is the nonprofit, “Kid’s Wings.” Started by one man and an airplane, its sole purpose is to transport sick children to locations for medical treatment, at no cost to their families. Dinser is a member and vice president of the organization, and annually helps to arrange fundraisers to keep the charity in the air, noting, “Every penny we raise is returned to the organization for the plane.”

Dinser is also a member of the Fellows of the Michigan State Bar (since 2012), past Chair, serving twice; Law Practice Management and Legal Administrators Section of the State Bar of Michigan (since 2006); member of the board of directors and current president, Sixty Plus, Inc. Elderlaw Clinic (since 2001); honorary member of Phi Delta Phi, International Legal Fraternity (since 2009); member and vice-president, Kid’s Wings (since 2005); coach and chaperone for Special Olympics (since 2002); and Women Lawyers Association of Michigan, president, Livingston County Chapter (currently inactive) (since 2002).

Truly honored to receive the award, Dinser offered her own insights and wisdom to students preparing to graduate, take the bar and go forth into the real world of law.

“Be the best, most competent lawyer you can be," stated Dinser. "Be a zealous advocate for your clients. Be respectful to others. Guard your reputation with your life.”