Brandon Ayers always wanted to go to law school. He took a somewhat winding path to get there, but once he did, he jumped in with both feet, earned his J.D. degree in just a fraction over two years, and passed the bar a month after graduation.

Ayers grew up in a small town in eastern Kentucky. Growing up, he knew he wanted to be either a professional basketball player or an attorney. The law won out, but first Ayers wanted to travel. After a few years of living and working in Las Vegas and Los Angeles, Ayers came to Michigan for a job and his long-held dream of being an attorney began to resurface. 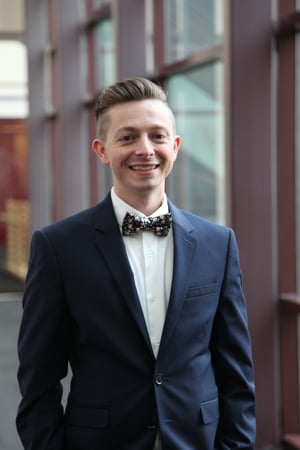 Ayers heard about WMU-Cooley from a friend back home who’d graduated from the school and had a successful practice. When he learned that WMU-Cooley had an accelerated program, he was on board.

“Because of my age and where I’m at in life, I really wanted to do it as quickly as possible,” he said, adding that “WMU-Cooley gave me that opportunity. From the time I started, to the time I sat for the bar exam, was 26 months total.”

“I was taking one class every single day, five days a week when I first started,” he recalled, emphasizing how important the fast-track was to his decision to get his J.D. “I would not have gone to law school if I would not have been able to complete it in that amount of time.”

As swiftly as Ayers went through law school, he took the time to participate in a moot court competition, which turned out to be one of his most highly valued experiences in law school.

“You are navigating very complex issues and there are typically several different moving factors or parts. It is like a puzzle. Moot Court truly is when you get one of those arguments or problems where you are literally putting the pieces of a puzzle together.”

Moot Court was a different experience for Ayers. Always talkative, Ayers is accustomed to speaking to large groups of people. Moot Court, he explains “is the opposite of that. It is a very small audience.”

Still, it’s a courtroom and that is where Ayers is most comfortable.

“That is what I want to do; be in the courtroom advocating for a position that I feel is in the best interest of my client, or something that I think is overall going to change the landscape of society in some way.”

Ayers’ affinity for the courtroom, along with his passion for constitutional law, could well guide him in his next steps in the profession.

“For me, constitutional law is where I feel the most at home, or the most connected to, because it really is a set of rules or a standard for all people, and we should be able to function and be treated the same under that standard,” Ayers said.

“Ultimately, at the end of the day, we need to have a fair system where everyone is treated equally, no matter what, and it’s consistent across the board.”

Ayers sees problems currently in the application of the law. “Hopefully, I will be able to work toward changing that and bring about equality in a number of areas in society.”

Ayers has always been pretty tuned in to his skills and strengths, but he credits law school and his moot court experience with solidifying that confidence.

“I have learned that I can go up against anyone, in any setting, and I can defend my position and defend it well and prevail,” he said. “That is one of the biggest lessons I have learned. I have to trust myself, trust that I can understand the law, and I know all the aspects of it, and from there I can adequately defend or advocate for my client.”

In a moot court competition, Ayers experienced the value that came from the steadfast support of the professors serving as coaches, the accolades from the WMU-Cooley community when they did well, and the gratification team members received from impressing competition judges with their skill and knowledge.

“I truly learned how important it is to look at even the smallest of words because one word can actually change someone’s life when it comes to court, and it happens all the time. Even a comma can change an outcome. You have to be very cautious of what you’re writing and what you’re putting out there because the result could be drastic in comparison to what you thought it was going to be.”

Post-graduation, Ayers has embarked on another learning experience, this time as a clerk. He’s back to work putting the pieces of puzzles together like he did in moot court.