On May 1 each year, thousands of people and organizations across the nation participate in Law Day, celebrating the role of law in American society. Of the many events that make up Law Day, few capture its spirit as well as a program first developed in our own state, the Liberty Bell Award.

The award honors persons or entities outside of the legal profession that have contributed to a greater understanding of our legal system, participated in it to the betterment of their communities, or helped to strengthen and improve the American system of justice.

Local bar associations generally present the Liberty Bell Award as part of a Law Day breakfast or luncheon program. The Muskegon County Bar Association’s 2019 Law Day program is typical. In addition to the Liberty Bell Award, their program included the Golden Apple Award to an outstanding teacher and awards for winners of an elementary school art contest, a middle school essay contest, and a high school speech competition.

By honoring non-lawyers, the Liberty Bell Award helps dispel the notion that Law Day is solely a “lawyers’ day.” At the same time, media coverage of Liberty Bell Awards casts a positive reflection on local bar associations presenting them. A May 30 article in the Monroe News, here, is an example. 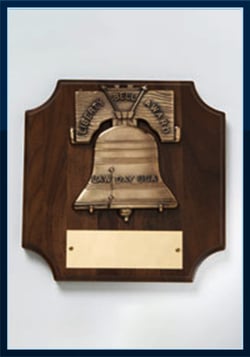 Flint attorney William P. Daniel conceived the idea of a Liberty Bell Award for non-lawyers in 1962, when he was a member of the State Bar of Michigan Young Lawyers Section. Young Lawyers Sections in several other states adopted the idea the following year. In 1964 the Board of Governors of the American Bar Association formally endorsed the award for bar associations nationally. The ABA makes available attractive Liberty Bell Award plaques.

The State Bar of Michigan in 1986 created a statewide Liberty Bell Award, which is presented each year at the Inauguration & Awards Luncheon in September. The winner is selected from award recipients nominated by local bar associations. The very first statewide winner, Diane Windischman, was nominated by the Ingham County Bar Association. She was honored for her work as coordinator of Michigan State University’s Sexual Assault Crisis and Safety Education Program.

The director of WMU-Cooley Law School’s Center for Ethics, Service and Professionalism, Heather Spielmaker, received the Ingham County Liberty Bell Award in 2011. She was honored for founding and overseeing the law school’s Service to Soldiers Legal Assistance Program. Heather received several additional honors on her way to graduating from the law school in 2015.

Since its inception nearly 60 years ago, the Liberty Bell Award has enhanced the celebration of Law Day across the nation. Thousands of individuals and organizations have received the recognition that they have not sought but richly deserve for their extraordinary contributions to our legal system. We who work in that system are in their debt.