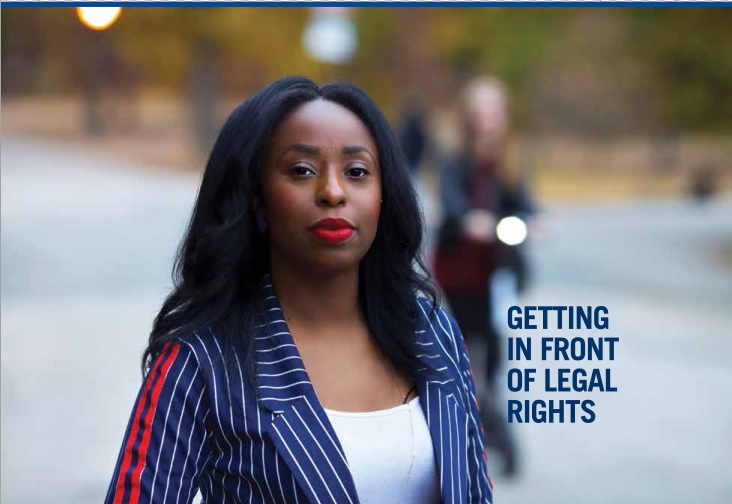 Using social media to promote businesses and products has become the norm in recent years, but attorneys and law firms often struggle to figure out how social media could benefit their specific practice areas. As a young attorney, Shequel Ross (William Johnson Class, 2013) decided to use social media to get legal information in front of a large audience and teach individuals about their rights.

The path to law school

Growing up in Phoenix, Arizona, Ross doesn’t remember how she decided to become an attorney.

“I always wanted to be an attorney. I didn’t seek out to do it, I just always knew that someday I would become lawyer,” said Ross. “My friends would change their ideas of what they wanted to do when they grew up, but I knew I wanted to be an advocate.”

Ross credits her parents for giving her the knowledge and foundation to become an attorney. Her mother was a librarian at a major law firm and her father taught sociology at Arizona State University and Maricopa Community College. Additionally, her father was recognized in the community as an activist.

“I marched with my father to have Dr. Martin Luther King Jr.’s national holiday recognized by Arizona’s legislature,” said Ross. “I would attend legislative hearings with him.”

Finding a home in Georgia

While attending WMU-Cooley, Ross had an opportunity to move to Atlanta, Georgia, for her externship. She worked at the DeKalb County Public Defender’s Office, where she was able to practice under the state’s Student Practice Rule. Following her externship and networking in the Atlanta area, Ross decided to return to Georgia after graduation to begin her legal career.

In September 2016, Ross was sworn in to the Georgia Bar, and with support of her family, in March 2017 she opened her own firm, SHElaw firm, The Law Offices of Shequel Ross, LLC.

“By the time I opened SHELaw firm, I decided I wanted to do more than practice law,” said Ross. “I decided that I wanted to impact others and teach. I wanted to teach others about their legal rights.”

Social Media Gets the Word Out

Ross describes herself as a private person. But when she opened her firm, Ross decided to try something that other attorneys usually don’t do. She opened social media accounts and created YouTube videos, placing links to the videos on her website, shelawfirm.com, and sharing the videos on Facebook, Instagram, and Twitter. It didn’t take long for her legal situational memes, posts and skit videos to garner hundreds of thousands of views, comments, shares and likes.

“I never had a social media account before,” said Ross. “I don’t think there could be a more private person than me. I was always careful because of the character and fitness rules for getting into law school and becoming an attorney.”

In July 2018, Ross posted a video where she stood outdoors with a diagram of a car and explained the rights passengers have while riding in a car that has been pulled over by law enforcement. The sketch was shared on Twitter and quickly garnered 16,800 retweets and 27,500 likes, and today has nearly over 400,000 views.

Ross has created several videos that have been shared broadly across social media platforms. She has even become a recognizable figure in the Atlanta area.

“I know social media is having an impact. We run numbers on this stuff and know who and when people are visiting the shelawfirm.com website,” said Ross. “I have had people yell out ‘shelaw’ in the grocery store, while on the streets, and even by other legal professionals while in the courtroom.”

Ross also keeps track of how her clients find her and said that 70 percent of her caseload comes to her office through social media.

Because Ross has worked on several criminal defense, business and civil rights cases, she noticed that even simple infractions can become expensive. She quickly discovered that many individuals need to have a better understanding of their rights, so Ross created and trademarked an ongoing outreach program that she titled the Legal Education Movement.

It is through the Legal Education Movement that Ross hopes to make a difference. She has developed a “Know Your Rights” campaign that includes a printable wallet-sized Miranda Rights card. Other social media campaigns include #ADayInTheLawWithSHELaw, #AskAnAttorney, and question-and-answer videos on proper conduct during a police stop, including how to legally record a traffic stop.

“I hope to expand the Legal Education Movement into schools and develop games that teach students their rights,” said Ross.

Ross’ social media posts are available on Instagram and Twitter by following @SHElawoffice, on Facebook by liking The Law Offices of Shequel Ross, LLC; and on YouTube at Shequel Ross. Read more about her in the June 2019 issue of rollingout.com and in the Summer 2019 issue of Benchmark Magazine.

Laura Bare takes her job seriously as one of WMU-Cooley Law School's associate directors in the law...
Read More

Mustafa Ameen (Fitzgerald Class, 2006), knew growing up that he was either going to be a doctor or...
Read More