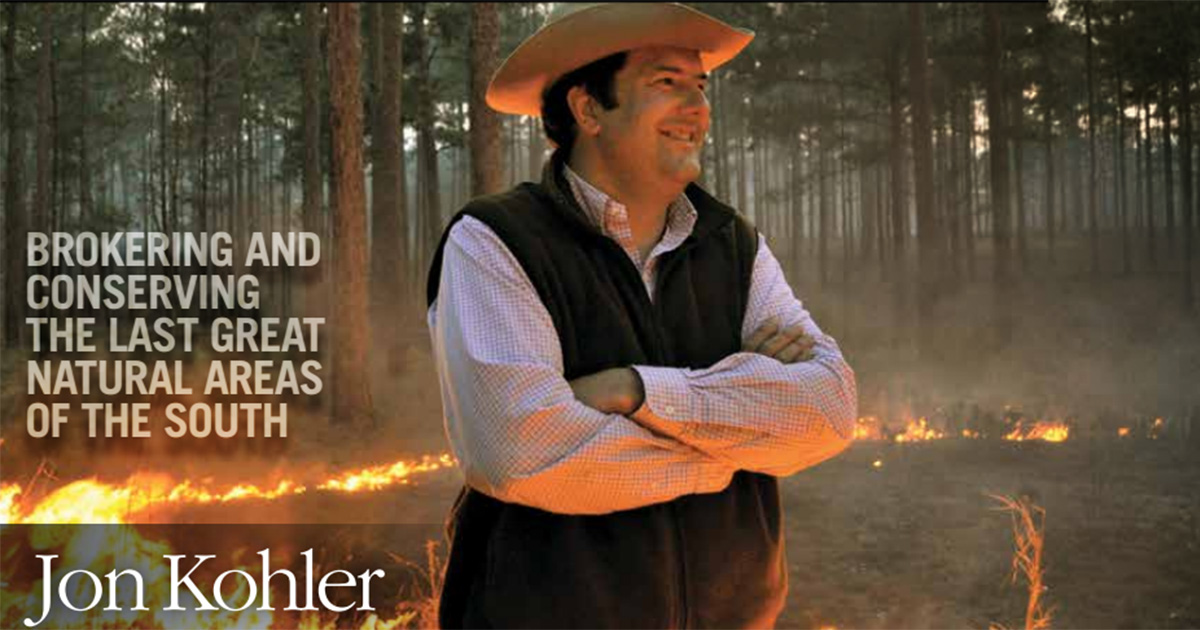 When you read articles featuring Jon Kohler (Adams Class, 1997) about his success as a land broker, you read about the deals that include large swaths of land in Florida, Georgia, Alabama, and South Carolina. You also read about the value of the land and how the deals were brokered. What you don’t read about in Forbes, The Wall Street Journal and others is Kohler’s passion for conservation and the need to rehabilitate and maintain many of the lands his company brokers in their most natural states.

In July 2021, Forbes featured Kohler’s firm, Jon Kohler & Associates, for what the firm has coined Social Storm® properties. This refers to properties that investors gravitate to for safety in bad times and buy for recreation during good times. The publication, Land Report, highlighted the firm in its article “America’s Best Brokerages” this past spring for brokering sales totaling $100 million to $250 million in 2020.

Since 2010, Kohler has closed on over 281,000 acres of land valued at more than $1 billion. The firm has also closed on the record-breaking $142 million sale of Rock Creek/Malpus; at 124,000 acres, this sale was regarded as the largest timberland sale in the southeast for eight consecutive years.

Though Kohler is considered the number one broker of plantations in the United States, he speaks of these lands, many of which have been converted from cotton plantations of the past to quail plantations today, as sacred and important to the ecosystem.

“From an almost biblical perspective, some of these properties stand as a representation of atonement and redemption," said Kohler. "These same places where bad things have happened have turned around and are now some of the most cherished places in America for their redeeming conservation efforts."

When talking about the large areas of land in the Southeast, Kohler explains their significance to conservation practices today. 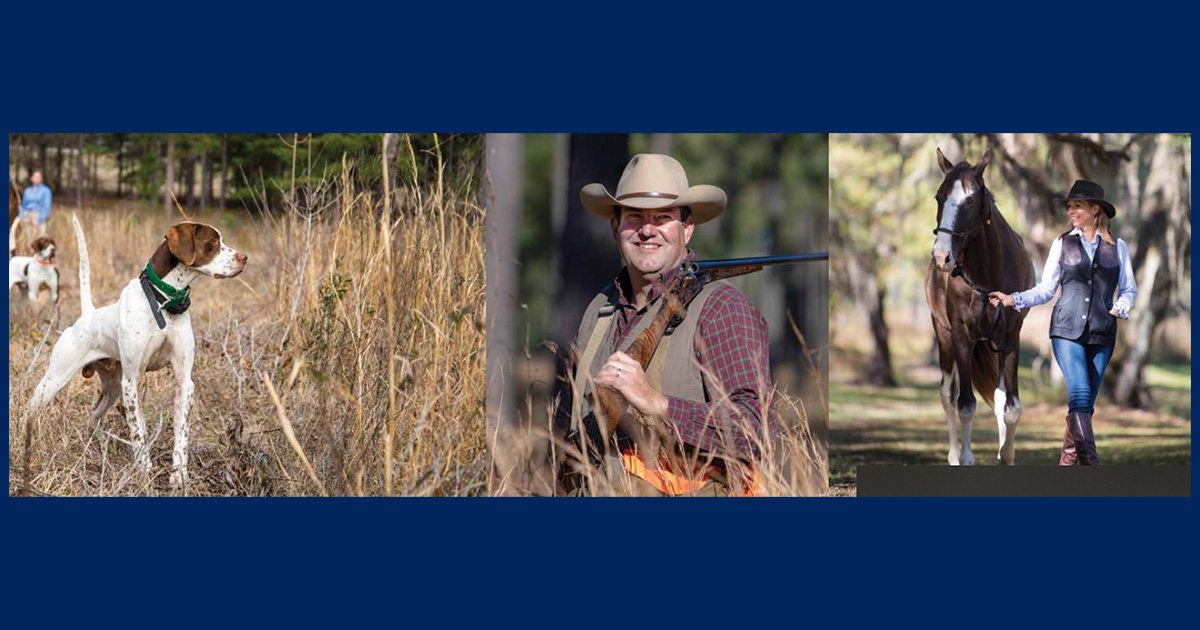 “It’s really a story that should be told that few people pick up on,” said Kohler. “Today, it's almost ironic or a complete turnaround. These are some of our country's most significant environmental and ecological properties. It took a lot of work to restore these properties. They’ve been converted from being cotton fields and have become the ideal model for conservation today.

“Let’s think about some of the best places in America today, like Yellowstone for me. Imagine if Yellowstone had been a cotton plantation and now it's been converted. The same thing has happened down here. The areas that we hold out from becoming developed lands are places that when birds leave the north in the fall, they come to for the neotropical summers. They have to stop at what are now quail plantations, because it’s the habitat they need before they migrate further south, and people don't think of that. If they land in an industrial timberland stand, cattle ranch or farmland, they won't have what they need. These are the last great natural areas of the South with native ground cover, wildflowers, and the open pine savannas.”

Kohler said that when marketing these properties within the four main plantation lands of the south – Union Springs, Red Hills, the Albany Area, and the Ace Basin – it is important to share stories, including historic and natural features of the land. But when he talks about the ecosystem, his tone changes and you begin to understand the emotion this third generation land broker has for conservation.

“When the Monarchs are flying down here, it looks like a rain storm on weather radar. These aren't a storm – these are Monarch butterflies. They come down and they hit this (land). Or the crazy ones are these little bitty songbirds. They catapult themselves across the Gulf of Mexico, just south of here, but they stay here for a week building up the reserves they need. If this wasn't here, I don't know what they would do. They aren't going to make it, at least the little bitty birds aren't going to make it, flying across the Gulf of Mexico. They have to have this. It’s the South’s last conservation area.”

As properties are sold in these areas of the South, the new property owners are tasked with keeping and promoting a healthy ecosystem.

“When you think of natural habitats, you think a lot of those are government lands, but these properties are managed much better than most state lands, most federal lands. It’s done organically. It's done by capitalists. Quite frankly, you know, especially like the map behind me, these four main belts in particular are so important.”

With each of the four designated plantation areas being nearly 300,000 acres each, Kohler says it’s like a giant national park with multiple like-minded property owners.

“Imagine if it were gone,” said Kohler. “Mass amounts of endangered species, like the gopher tortoise, are being propagated and protected on these properties.”

Kohler credits much of his success to his wife Erica, who spends her time researching and placing values on the properties they sell. Before Jon Kohler & Associates found its niche in selling properties for recreation purposes to those investing in land, most land was appraised for its value as agricultural, business or residential.

Thanks in large part to their efforts today, the quail plantations are regarded as a separate asset class and heavily sought out by both investors and conservationists.  While most are private, when they do lease out hunts, upwards of $10,000 a day can be expected. Quail play a vital role in both drawing recreational interests as well as being an indicator species for the overall health of the ecosystem.

Kohler, his wife and two children, Greyson, 10, and Ashton, 7, reside in the Red Hills area, near Tallahassee, Florida, on a 600-acre parcel of land known as Lick Skillet. Sitting along the Aucilla River, the property is named after a local town dating back to the 1800s. It was believed that when individuals cooked over open fires and left their skillets out, bear would come out of the woods and lick the skillets clean. Kohler says that the oldest known evidence of humans in North America has been found in the area just below his property, as a mastodon tusk containing human carvings has been carbon dated at over 12,000 years old.

Besides working as a land broker, Kohler enjoys taking care of his land and bringing it back to its natural state. He is also an avid quail hunter and serves on the national boards of both Pheasants Forever and Quail Forever.

While attending WMU-Cooley, Kohler knew he was going to be a land broker, but wanted to earn a law degree to be the best land broker he could be. He credits WMU-Cooley for helping him become a storyteller for the lands he represents.

“The thing that most individuals believe is important about law school is gaining knowledge of laws, which is very important of course,” said Kohler. “The thing that law firms don't focus on is the storytelling and the persuasion. I believe Cooley trained us to be persuaders and negotiators. That’s one thing that separates my firm as a land broker from others – we are storytellers. I look at a lot of good trial attorneys and they're storytellers. They weave the story in with facts in a compelling way.