How to Eat an Elephant and Become an Attorney

Imagine being in business for yourself for almost 10 years and suddenly everything changes. New laws make it a very real possibility that your employees will become your boss. You could conceivably lose your company. You could lose your livelihood, your income, everything you have built. And the worst part is, due to a lack of education, your prospects are very limited.

That was the situation Tampa attorney and WMU-Cooley graduate Edward Reyes found himself in 2013, when as the owner of a doctor’s office, he was faced with health care law changes that required the doctors he hired in the practice to be part of the corporation and be on the bank account. It was a rude awakening for Reyes.

“Now doctors, even though they're on my payroll, now they're my boss and they can fire me off my corporation,” Reyes recalled. “That created a huge problem for me and I was saying to myself, ‘What would happen if I had to close my business? Who's going to pay me the amount of money that I need to make when I don't have a college degree?’ I didn't have an associate's. I didn't have my bachelor's. So, I decided at that point to make a difficult decision. I decided that I needed to go get my associate's, then I got my bachelor's and went to law school straight, and I still worked full time.”

If that sounds like a grueling interlude for a man with a wife and two children, rest assured it was. But Reyes, with his typically upbeat, can-do attitude, had a secret weapon: goal chunking. Rather than psyching himself out by looking at the length of time it would take to get from ground zero to a law degree, Reyes “chunked” it into smaller portions, sometimes in years, sometimes in months, or weeks, and sometimes in days; Whatever it took to get him over one goal and on to the next. Kind of like eating an elephant.

Reyes graduated from WMU-Cooley in January 2017 and passed the bar in July. Within 24 hours of posting his good news on Facebook (and getting hundreds of likes and kudos), he was in business for himself again.

“I got hundreds of comments and somebody called me up and said, ‘Hey, do you want your first client?’ and I said, ‘Of course!’ The funny thing was I had to call the bar to see if they could send me the paper with the oath so I could get it notarized. Then I had to go to an attorney friend of mine and we had to do an emergency swearing in, very impromptu. I had a client 30 minutes later. The best thing about this is that because I didn't have a lot of the forms, he gave me a lot of his forms. I had to stop at a Chick-fil-A on the way to Clearwater to sign up this client and I filled out all the forms on the fly. Then I met with the client, signed him up, and I got that client that day. I got another client the next day. I've been open since September and I have about 140 clients right now.”

In addition to his medical background, Reyes is also a real estate broker and is melding all of his expertise in his legal practice which is about 80 percent personal injury and 20 percent other areas, soon including real estate closings. In keeping with the Reyes level of energy and accomplishment, his practice has grown “at a rapid rate.” In the beginning he was in a shared space, but when it got to the point where he was using up all the shared conference room space, he moved on. Now he has five employees, including his wife Maria and two contract paralegals, and an office of his own in Tampa. He also brings his daughters to work with him, something he said has strengthened their work ethic. 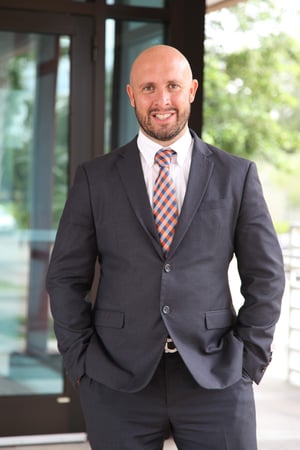 “Some people want to separate work from personal; to me, it's just all a blend,” said Reyes. “To me it's a good teaching moment for my kids. I think it models a good work ethic and it helps me spend time with my kids, whenever possible. And they look forward to it.”

Reyes especially enjoys being able to help people who have been hurt. Thanks to his previous medical experience, he has an enhanced level of knowledge, not only about the injuries, but also about the costs associated with them.

“I'm new as an attorney but I'm coming with 18 years of experience, and my strong suit is I understand the medical side,” Reyes said. "So when clients come to me for their injuries, I understand what's going on. I'm not a doctor, but I understand what's going on and I can make recommendations. I can kind of lead them in the right direction. If they have any questions I can go deeper, and in addition, it helps me in negotiating bills. So whenever there's a settlement and they're high — high hospital bills or high medical bills — I can get the client the most money possible for their settlements.”

Looking back, Reyes should be amazed at what he has accomplished, but he takes it all in stride. And his advice for others who are considering taking a leap of faith and pursuing a dream that may seem an overwhelming task is, “Never give up and have something that fuels you … have something that gives you power.

“For me it was the way I grew up that gave me the fuel to become a better person. My background was not very polished and then when my wife had my oldest daughter, it kind of made me grow up,” said Reyes. “Don't give up. Chunk your goals down and then go towards them because when people say it's going to take five years; well you know what’s going to happen in five years if you do nothing? Nothing! Time doesn't stop, it has no feelings. If you're going to do it, start now, don't give up, and by the time you look back you're like, ‘Wow, I did this.’ Zig Ziglar said it well, ‘If you help enough people get what they want, you'll get what you want.’ The idea here is don't give up, help people out and you'll have a blessed life.”