Early in his career, even before law school at the University of Michigan, recently retired Professor John Scott taught junior high English and decided it wasn’t for him. Looking back, Scott realizes it wasn’t the teaching part he didn’t enjoy, it must have been the subject matter.

Scott joined WMU-Cooley Law School in 1978. At the time he was a general trial attorney based in Kalamazoo specializing in property, family, criminal, and bankruptcy litigation, when a friend from law school suggested he might really like teaching law at WMU-Cooley. Scott wasn’t so sure. He enjoyed his work and thought back to his days in law school when “The professors were gods and we were mortals” and concluded “That was fine. A good way to keep it.”

But his friend persisted so Scott sent a resume, and before long he had an appointment in Lansing with WMU-Cooley founder and president Thomas Brennan. But as the hour approached, Scott found himself in court in Kalamazoo with no end in sight, thinking, “I guess I wasn’t meant to me a professor.”

Then without warning, the judge called a recess for the day, leaving Scott just enough time to make the drive, attend the interview and ultimately get the job.

“My plan at the time was, ‘I’ll give this a couple years, see if I like it,’ and then the next time I did the career examination was about five or six years later,” he recalled. “Then I thought, ‘I guess I like it!’ and here we are 40 years later.”

Scott can now look back on an extraordinary teaching career and a lifetime of memories from classroom and courtroom. In the beginning he taught Property and Civil Procedure, Research and Advocacy, Mortgage and Land Contracts, Land Use Law, and Local Government Law. But his real love was Evidence and he waited patiently for that opportunity.

“I didn’t get to teach Evidence, which was really my passion, until about 1987. I think the other Evidence guy was on sabbatical or had one coming up,” he said. “Then Dean LeDuc asked, ‘Would you ever consider teaching Evidence? and I said, ‘Uh, yeah, it’s kind of my thing.’ So, then I was in Evidence and I knew I was going to stay there for the duration.”

Although one might think law school is staid, always serious and never fun, Scott credits his students with bringing plenty of levity into the classroom. A class on Halloween in 1985 stands out in his memories. 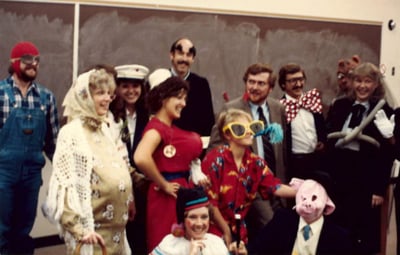 “Our class was scheduled to meet on Halloween. As the students were coming in I was sorting my notes and just before class I look up and see they are all in costume. Oh, Halloween, I get it. How clever. And then I realized they are all dressed up as cases,” recalled Scott. “One person was an attractive nuisance, one the unborn widow, another the fertile octogenarian, and all these cute little things about the rulings against perpetuities. One of the female students was dressed in a gray wig and out to here and she’s the fertile octogenarian of course. Then, 15 minutes into the class she lays down in the aisleway and pulls out a baby doll from her dress as if she is giving birth. Well, we had all kinds of great fun that night.”

Scott also keeps track of his students, albeit in a most unusual, but sensible way. He managed to save his master seating charts from most of his classes, even decades ago. Now, years later, he's finding that many of his former students are not only successes, but pretty famous.

“Sometime in the early to mid-1980s I started saving my master seating charts. I found I’d had future Governor John Engler, the now Interim President at MSU, and Congressman Bart Stupak was in my class, as was Paul Hillegonds, former speaker of the Michigan House of Representatives and president of Detroit Renaissance.”

One former student, now Tampa Bay Lightning NHL Head Coach Jon Cooper, shared Scott’s love for all things hockey and Scott loved to keep a close eye on his career after he graduated. This past year, another former student, Bruce Carter, set out to get Coach Cooper to autograph Scott's seating chart. 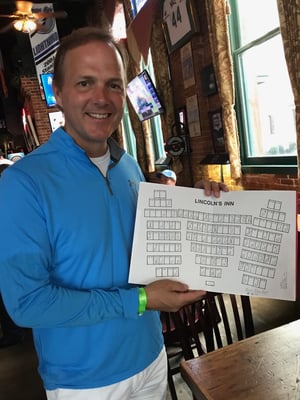 “(Cooper) was surprised when one of my old students with connections to the club showed up with that seating chart and asked him for an autograph on my behalf,” Scott said. “You may have seen the video, he says on it, ‘He saved this for 21 years?’ and Bruce says, ‘Well, he saves them all.’ So, he signed it and wrote, ‘See, it pays to sit in the back of the room.’”

Among Scott's many accomplishments over his decades at WMU-Cooley was coaching trial teams. He began in 1982 and made it to many National Final Fours, along with winning regional championships along the way. He was also co-chair of the National Association of Criminal Defense Lawyers (NACDL) Criminal Trial Competition. The partnership was a good one for WMU-Cooley since the competition gave students some great exposure.

“Since the competition was held in conjunction with their annual meeting, they had all of the active members of the association coming and we would tap them as judges for the competition,” Scott recalled. “So, the students would get exposure to them and they’d see the best law students in the country, including many from Cooley, trying these cases. We had lots of job offers and certainly lots of mentoring and advice come out of that relationship.”

All told, Scott figures he may hold some kind of record for the number of hours he spent teaching law.

“Oh my, let’s see. Start with semesters, 40 and a third years, so 121 semesters, usually two or three classes a semester. It must be somewhere between 250 and 300 classes, I would think. Counting electives and things like that,” he said. “At conferences you’ll strike up a conversation with someone who’s teaching evidence or property too, and you’ll say, ‘Well how long?’ ‘Oh, 25 years, I’ve taught property 25 times. How about you?’ ‘Oh, 150.’” 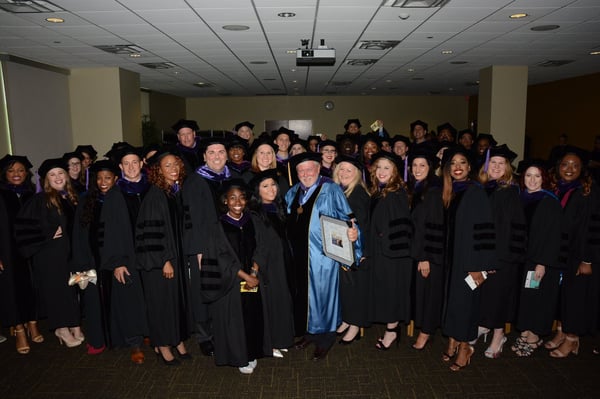 Despite retiring, Scott has plenty of plans, including travel, tennis, teaching his granddaughter to skate, and lots of beach time. As for his legacy, Scott thinks his legacy is the same as any conscientious law professor.

“(I hope my students say) ‘He was tough, he was fair, he was interesting.’ Tough in the way of demanding. Tough in the way of preparing them for the bar exam and for practice,” Scott explained. “Sometimes we tend to think of our job as finished when they pass the bar, but I’d kind of like my legacy to be like a lot of really good lawyers out there. Earning the respect of judges and juries and their communities, which would be kind of a collective legacy for all of us. We’re all trying to do that.”