Erika Kirkwood — From Law Enforcement to the Law

Growing up, Erica Kirkwood (Souris Class, 2009) was surrounded by family in law enforcement. Her dad is a sheriff. Her sister is a sheriff. Her grandmother is a retired sheriff. She even has an uncle and aunt who are sheriffs. Plus two sheriff cousins. Kirkwood even took the sheriff’s exam and passed it.

But something stopped her from going down that path.

“I liked the idea of law enforcement, but I just wanted to do something different,” shrugged Kirkwood. “I also loved FBI agents Mulder and Scully, when they had their show on TV, and that inspired me too. It seemed like a really exciting and rewarding career.”

The seed was planted and Kirkwood concentrated on making her goal of becoming an FBI agent a reality. She earned her bachelor’s degree in criminal justice, then looked for the next step.

That step came to a skidding halt when she found out that the FBI was on a hiring freeze.

“I couldn’t believe it,” said Kirkwood, shaking her head. “It didn’t make any sense to me, but there wasn’t anything I could do about it. I ended up putting the FBI career on hold, while taking a job with the city of Chicago as an investigator. The job involved mostly investigating businesses. I would inspect business licenses and make sure that they were in compliance with municipal ordinances and public way use rules, and investigate consumer protection complaints. Oddly enough, I found that I really liked the work. It got me thinking about my goals and my future.”

But it was Kirkwood’s father who turned her head to another side of the law.

“I have to be honest; it was my dad who inspired me to go to law school,” said Kirkwood. “I kept hearing his voice. He went to WMU-Cooley. I remember him coming home from his classes and telling me all these great stories. He would tell me how the professors were so smart. How much he learned. I found his exciting tales very contagious.

“That was the point when I realized that going to law school was really what I wanted to do. I didn’t need to be an FBI agent.” 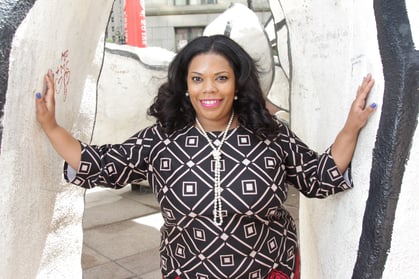 Yet Kirkwood was conflicted. She didn’t want to give up her job with the city. Nor could she afford to quit. She needed part-time classes. After looking at the Illinois law schools, and realizing they didn’t offer any part-time programs that worked with her schedule, she started looking outside Illinois.

“I wasn’t ready to give up,” declared Kirkwood. “I knew there was something out there for me. Then I heard my dad’s voice again – telling me about WMU-Cooley’s part-time program, AND they offered classes in Lansing, AND they offered weekend classes!”

That was it. Kirkwood started law school the next semester, with a scholarship to boot.

“It was funny,” laughed Kirkwood. “I thought I would be giving up a lot by going to law school on weekends, but I loved it, especially the weekend students. I found them to be a different type of student – more focused. It felt like they knew what they wanted to do, and they seemed to have a greater level of determination.”

Typical of Kirkwood, no matter how busy, she found ways to do more. In her second year of law school she took it upon herself, with the help of a few classmates, to start the Weekend Law Society student group.

“They made me the first president!” she said with pride. “I think we did a lot to support our weekend community and build our resources. We also managed to host a number of exam preparation study groups. It seemed to add to the bond we already had for each other.”

Commuting to school could be a challenge, especially during winter, but Kirkwood was determined to let nothing get in her way.

“It was my last semester, and I had a Moot Court competition coming up that weekend. I was on my way to Lansing, Michigan, during one of our horrible Michigan winters – you know what I’m talking about! Well, I had gotten all the way to Kalamazoo and, you guessed it, I got into a car accident and totally wrecked my car.

“But that wasn’t what I was thinking about! I was thinking I needed to get to school because I had my Moot Court class that day. I called my (then) boyfriend, who came to Michigan to get me. He met me at the hospital. You should have seen his face when I told him he had to take me to school. He didn’t know what to say, other than ‘What are you talking about, you can’t miss Moot Court?’ Well, we left my car – it wasn’t going anywhere anyway – and we left the hospital for Lansing.

“Amazingly, I made it to class! My professor was stunned, and said ‘What are you doing here?’ I told him I had to be there because I didn’t want to miss a class and I didn’t want to mess up my grade. Well, I’ll just say that he was very gracious because I noticed he didn’t have me participate much that day in class, and he even let us out a little early. Makes me laugh to this day. I was fortunate to only have a few minor bruises and a chipped tooth, so, in retrospect, everything turned out fine. It also definitely turned out to be a crazy story to tell.”

Kirkwood drove every weekend for three years, taking classes on both Saturday and Sunday, while continuing to work full time with the city.

Asked how she was able to fit it all in, she responded with a smile, “I have my little village, and it definitely helps to know how to multi-task! It was hard, but the whole experience was actually inspiring for me. It gave me tons of confidence in my abilities.” Confident and feeling prepared to do anything, according to Kirkwood. “I felt like WMU-Cooley definitely prepared me to come out and practice law with the city. Initially I was an investigator, then I had a private practice, and even hired two associates. My law school experience taught me how to run a business. I don’t know too many law schools that not only teach you how to practice law, but how to run your own law firm.”

MOVING UP IN THE WINDY CITY

After graduation, Kirkwood decided she would continue her work with the city of Chicago. She was seeing more and more interesting cases, and she was given more responsibilities.

“I started to litigate different consumer fraud cases,” recalled Kirkwood. “It was intriguing work. One of the big cases I worked on dealt with vacation rental companies – businesses like Airbnb and HomeAway. Our role is to protect consumers who don’t know about our laws, like the fact that you actually need a license to host your home for less than 30 days.”

That project led Kirkwood to handling other big projects, including foreclosure cases. Then a friend told her about an opportunity with the state of Illinois.

“It was an opportunity I couldn’t pass up,” declared Kirkwood. “I was going to be able to go after the bad guys and help consumers and children. Really meaningful work. I am now the Deputy General Counsel for the Illinois Department of Children and Family Services. I negotiate our contracts, our intergovernmental agreements, our memorandums of understanding, vendor contracts, hotel contracts, software agreements. We have negotiated agreements for mobile apps, as well as data sharing and university agreements.

“I also manage our panel of outside adoption attorneys, attorney general’s cases, Office of Civil Rights complaints, and I make sure any changes to our rules and procedures are legally sound. So, it’s a multitude of responsibilities.”

Her work with the state is not the only thing Kirkwood fits into her life. For the past three years she has been on the board of the Black Women Lawyers’ Association of Greater Chicago. This year she is president.

“I have found my journey, in and of itself, a very rewarding path, but giving back by helping other black women lawyers succeed has been a reward I can’t put a price on.”

“One of the great things BWLA of Chicago does is host mentor dinners throughout the year. We have mentors, all local attorneys in different areas of the law, who attend and talk to women about their work experiences and the roads they each took to get into their positions.

“We also host a spring fundraiser where we raise money for law students, including scholarships for internship opportunities. This year we walked in the Bud Billiken day parade, one of the oldest parades in the city of Chicago, to improve the visibility of Chicago’s black women lawyers and their contributions to our community.” Kirkwood is especially excited about her theme for the year called “BWLA Excel,” which focuses on how women can excel in both their personal and professional careers.

“I have found in my life that black women attorneys seem to have a harder time getting into board positions, at every level – corporate boards, city boards, state and county, and other boards and commissions. I started the T.E.A. leadership program, which stands for Train, Excel, Appoint. We are bringing in a select panel group of leaders to run workshops and skills based classes in support of improving women’s roles in leadership.

Not only does Kirkwood feel that law school prepared her for career success, she says it trained her for success in her work-life balance.

“I have the most amazing husband,” exclaimed Kirkwood. “We’ve been married a little over six years, and we just had a new baby boy, Braxton. He’s been such a great support to me at every level. Time is precious, so we make spending time together, and as a family, a priority. If we do have any spare time, we love to watch movies, listen to music, go to rooftop restaurants, or just go to the park or to a concert.”

Spare time is something Kirkwood has always used to learn and explore new things. In fact, Kirkwood has been curious all her life. Probably because her father and mother encouraged it. At the age of 13, she was already a television producer for CAN TV, which is a public access network in Chicago, where her father produced television shows. He had all his children get certified in production, so Kirkwood and her siblings were well versed in being behind a camera and producing shows at very young ages. The show was called Financial Concepts of Success, where guests were invited to appear on the show to share expertise in the areas of financial success.

“We got to produce the shows, be behind the cameras, and sometimes even interview people,” shared Kirkwood. “I’ve actually been on Four Weddings, which is a wedding show about getting married, and House Hunters, which is a show about finding your home.”

Kirkwood is excited about all she’s been able to accomplish to date, but is equally enthusiastic about what the future has to bring.

“I love my life, my family, and my work,” said Kirkwood. “I can’t imagine it being better, but I also know that that’s exactly what I see myself doing – making life better for, not just me, but for the people around me and my community.”

This article was originally published in the December 2017 edition of Benchmark Magazine.