This story about WMU-Cooley graduate Danielle Dawson was written by Grand Rapids Legal News writer Cynthia Price and was originally published by the Legal News on August 29, 2018, It is reprinted here with permission of Detroit Legal News Publishing LLC. 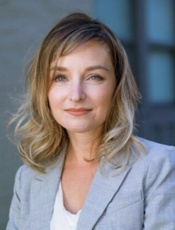 New Bloom Sluggett associate attorney Danielle Dawson will be able to combine many of the skills she has gained in her relatively brief career as she adds new ones.

She will be working in a wide variety of areas, including federal litigation and employment law, but her first assignment is municipal ordinance enforcement for the City of Kentwood, which includes litigation when needed.

“I love the fact that here I have a variety of work,” she says. “ I’ll work on a variety of civil litigation cases that may be about property boundaries, employment law, and other. With Kentwood, I can still kind of get that feeling of being a prosecutor, but I won’t have violent and horrific cases.”

Dawson clerked during WMU-Cooley Law School, from which she graduated in 2015, at the Abood Law Firm in East Lansing, which provided some of that experience, but will draw greatly from her time as a paralegal in the U.S. Attorney’s Office for the Eastern District of Michigan.

She practiced there from her graduation until late 2017, but wanted to come back to the Grand Rapids area where she grew up. The Lowell High School graduate comments, “Living in Detroit for a couple years was great, and I love the City of Detroit, but Grand Rapids has so many things to offer.” In addition to the opportunity to be closer to family and friends, the area’s offerings also include a job at Progressive AE for her husband, who studied architecture at Southfield’s Lawrence Tech.

After that, Dawson worked briefly at an area firm that specialized in insurance law. “It was a really nice place to work and I really enjoyed them but I did not enjoy no-fault insurance work,” she says with a smile.

After attending Michigan State University, she got a taste for the legal profession when she worked as a legal secretary at Steven E. Bratschie and Associates. “Throughout my childhood, people would always say to me, ‘You know, you really should be a lawyer,’” Dawson says. She was next a paralegal in the office of the general counsel at Grand Rapids Community College – a job she maintained during all of law school.

“Cooley was a great option for me. It offered nighttime classes and it made me feel like a law degree was possible for a working adult. I had great professors at Cooley,” Dawson says.

Probably her most cherished legal experiences were from the time she spent in the Financial Litigation and Asset Forfeiture Unit under U.S. Attorney Barbara McQuade, who was replaced by Matthew Schneider at the change of federal administration.

Dawson worked with attorneys there, each with a slightly different set of tasks for her, to communicate with agencies and prepare pleadings in civil forfeiture. “It was fascinating,” she says, “but I can’t say any more specifically because I signed a non-disclosure agreement.”

Public sector work is one of Bloom Sluggett’s main focus areas, and Jeff Sluggett has just been chosen the 2019 Lawyer of the Year in the field of municipal work by Best Lawyers©.

Sluggett, who has now been included in The Best Lawyers in America three years in a row, is also a Michigan Super Lawyer. He chaired the Public Corporation Law Section of the State Bar of Michigan 2008-2009, and was named by the Michigan Association of Municipal Attorneys as the 2010 Distinguished Municipal Attorney of the Year.

Clifford Bloom, firm co-founder, has a national reputation in riparian law, and also does municipal work. Other emphases at Bloom Sluggett, which was founded in 2012, are real estate, property tax, and business law.