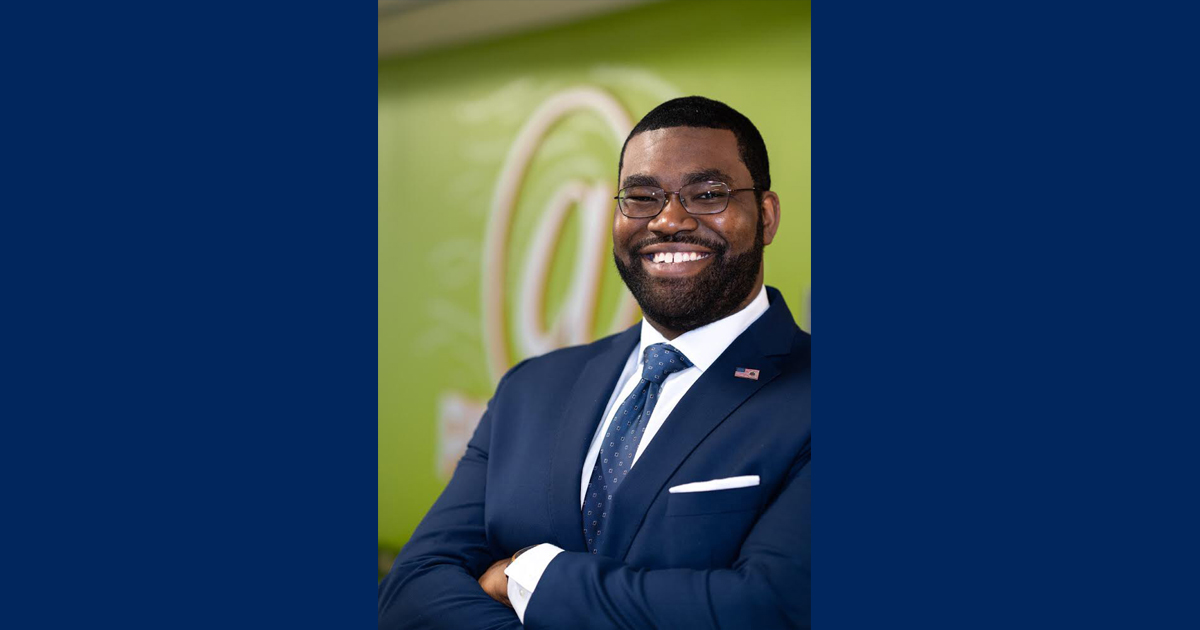 Christian Wise Smith (Wilkins Class, 2011) has a history of beating the odds. So when he launched his campaign for Fulton County, Georgia, district attorney and was told he had little chance of success, he simply recalled his motto: significance over success. “By that measure, what I did was very significant, and ultimately, it’s going to lead to enormous success in fighting for social justice.”

“I didn’t win the election,” Wise Smith says. “But I won the spotlight, and that’s allowing me to have a significant impact.”

Wise Smith, 37, took on a 24-year incumbent and another former district attorney in a three-way race that saw the young challenger garner 24 percent of the vote in the June 9 primary. “I didn’t make the run-off, but I received nearly 40,000 votes, and those people are the ones who will ultimately decide who will be the next district attorney in Fulton County,” he says.

Wise Smith might not have won at ballot box, but by all accounts, he won the conversation. Ideas that hadn’t been on the table before in Georgia – ideas that Wise Smith has researched across the country – are still being talked about.

“The justice system is set up for people to fail. In Fulton County, the policies of systemic racism continue unabated. When it comes to their experiences with the justice system, people who have money and privilege enjoy equal protection under the law,” Wise Smith says, “while the ‘have nots’ — especially black and brown citizens — endure a system that presumes guilt, criminalizes mental health problems and substance abuse, and values conviction rates over the dignity and potential of human beings.”

His campaign brought those issues forward. Solutions such as eliminating cash bail, creating a comprehensive pre-trial diversion program, and ending the prosecution of minor drug offenses were touted as proven ways to create a more just system. “In the South generally, and in Georgia specifically, there has never been as progressive a campaign. We changed the hearts and minds of a lot of voters.”

Wise Smith knows a lot about change. He’s had to make enormous changes in his own life to get where he is now. Growing up in Cincinnati, Ohio, Wise Smith describes his home life as “chaotic.”

“My mother was arrested when I was five, then in and out of the legal system after that. One of my earliest memories is of my grandmother being arrested in front of me when I was seven. The adults in my life continued to have legal troubles, and my grandmother had health problems, as well. Stuff was so bad at home that school wasn’t a priority,” he explains.

At the age of 16, Wise Smith’s mother lost custody of him. A year later, he was kicked out of school. “I had a teacher tell me I was either going to end up dead or in jail,” he says. “That’s what people expect of a young, black man who falls through the cracks.”

One person believed Wise Smith’s path could be different — his grandmother. “She always told me I was different. She said I could be ‘somebody’ someday. She saw potential in me that other people didn’t see.” He recalls his grandmother telling him he could be a doctor or a lawyer if he set his mind to it. “She didn’t tell my cousins that – only me,” he says. At the time, Wise Smith was struggling just to get by, but he tucked his grandmother’s encouragement away in his memory.

But Wise Smith’s grandmother wasn’t the only person who saw his potential. A police officer named William Dean Sr., father of one of Wise Smith’s best friends, saw his capacity for leadership and purpose. He encouraged the young man to change his life.

Being kicked out of school was the turning point. “It made me realize that if I wanted to be different, I had to do something different,” he says. He enrolled in a different school and shortly thereafter, start applying to colleges, eventually being accepted to Ohio’s Central State University. After two successful quarters, he transferred to Ohio University in Athens, Ohio. “It was one of the best decisions of my life,” he reflected.

Charting a path to significance

At Ohio University, Wise Smith majored in health care administration. He later earned his master’s degree at Troy University in health care management. Even when he enrolled at WMU-Cooley, Wise-Smith was still planning on a career in the health field. “I looked at a law degree as a way to fast-track myself to the executive level. I even started a healthcare career student organization at WMU-Cooley, bringing in speakers for education and networking.”

An externship at Grady Memorial Hospital brought Wise Smith to Atlanta. He loved the work and the city and wanted to stay but couldn’t find a full-time position in healthcare. “Instead, I accepted a job offer from the Atlanta City Council as a legislative aide for District 5. I ended my externship at Grady on a Friday and started a full-time job the next Monday,” he says.

Wise Smith was soon promoted to Chief of Staff and stayed with the city council for two years before moving on to his first prosecutor’s job as an Assistant Solicitor with the City of Atlanta Solicitor’s Office. He was soon promoted to Senior Assistant Solicitor, and spent five years there before moving on in 2018 to the Fulton County District Attorney’s Office, an office that serves 15 cities and handles all manner of crimes, up to and including murder.

Despite his personal success as a prosecutor, Wise Smith saw on a daily basis that something was wrong with the criminal justice system overall. “The justice system is set up for people to fail,” he said. He offered the cash bond system – the abolishment of which was a key campaign topic – as an example.

“When you set high-dollar bonds for non-violent crimes, particularly for young men of color, people have to sit in custody while they wait for trial because they can’t afford to post bail. Meanwhile, they lose their jobs, their home or apartment, their medical coverage, and often their family. They eventually leave jail, and even if they were never tried or convicted of a crime, they have nothing,” he explains. “That’s an unjust system that creates its own failure.”

“On television, you see prosecutors as these law and order warriors who want to win at any cost,” Wise Smith says, “but that’s not your job. Your job is to seek justice. It should be people over conviction rates.” He concluded that by using discretion and showing mercy, prosecutors can be agents of change at a time when people need help the most. “I decided to do it differently.”

Changing others’ lives for the better

WMU-Cooley Professor Jim Hicks, who taught Wise Smith in law school and came to know him well, said Wise Smith has always believed that we need to prioritize people over conviction rates, and services over sentences. “He argues we must change the system to stop stigmatizing young persons of color, particularly young men, with convictions for non-violent crimes that limit, sometimes permanently, their ability to better their circumstances,” Hicks recalled.

Even as a law student, Wise Smith “always walked the walk on this point,” Hicks continued, “As a 3L, Chris wrote in a PR class assignment that he'd view his legal career as a success if he could point to one young black man who was in college or a good job, rather than in the system, due to his efforts.”

Hicks said that Wise Smith is responsible for successfully redirecting several such offenders. Wise Smith remembers one in particular. In 2013, in his first year as a prosecutor, Wise Smith found himself dealing with a 17-year-old young man who was facing drug charges. In a 10-minute conversation with the high school senior and his mother, Wise Smith learned more about the young man and his hopes than anyone had taken the time to learn in a long time. “He was in trouble, but he had goals – and he reminded me a lot of myself at that age.”

The teen had a dream of playing football in the NFL. Wise Smith told him he’d first have to play college ball, and he couldn’t get financial aid to do that if he had a drug charge. So, Wise Smith created his own diversion program on the spot and went to bat for the youth with the judge. The agreement required a minimum grade point average, ongoing drug tests, community service, and classes on drug abuse and avoidance.

Stunned by this second opportunity for success, the teen did everything asked of him, and Wise Smith threw his case out. “About a year later, his mom sent me an email saying her son had stayed on the straight and narrow and was now playing football at a junior college in Oklahoma.” He eventually transferred to the University of Tennessee, where Wise Smith frequently watched him play. “I watched him get his degree in 2018 and he even was invited to a mini-camp with an NFL team,” Wise Smith reports. “That’s what can happen when someone gives you a second chance.”

“Most people don’t understand that prosecutors have the ability to change people’s lives for the better. That’s the kind of justice system I want to create.”

Planning for a significant impact

“When I started running for office, it wasn’t just to get into politics, it was to effect change in the system,” Wise Smith says. In 2019, he began researching best practices in criminal justice in cities like Chicago, Philadelphia, and Washington, D.C. Traveling to Seattle, he learned about LEAD – Law Enforcement Assisted Diversion - and how it was successfully being put into play. “Defendants are aligned with services specific to their needs, so they get practical help to break out of their lifestyles. Their cases are put on hold and, ultimately dismissed if the participants are successful. It’s a game-changer,” Wise Smith says. “They’ve seen crime rates go down and an increase in all things good.”

Progressive changes to the criminal justice system were a cornerstone of Wise Smith’s campaign. Now that the election is over, he’s taking his crusade to a larger stage, creating a non-profit organization, the National Social Justice Alliance, to carry the conversation about prosecutorial reform throughout the country.

“We’ll be fighting for the same things I campaigned on,” he explained, adding that the organization will work with prosecutors across the country on changes that will ultimately make for safer communities.

Wise Smith is also developing a media platform that will include a talk show based on politics and social justice. “There isn’t a young Black voice in that space,” he said. He plans to start it online and eventually expand it to a major platform. “Every show will feature a guest who will speak to social justice and criminal justice reform,” Wise Smith says. “These will be significant conversations.”

Wise Smith and his wife, Keonda, live in the Atlanta area and are expecting a baby in August. Wise Smith also has three other children, a son 12, and two daughters, ages 9 and 1 1/2.