Rosemarie Aquilina: A Voice for All 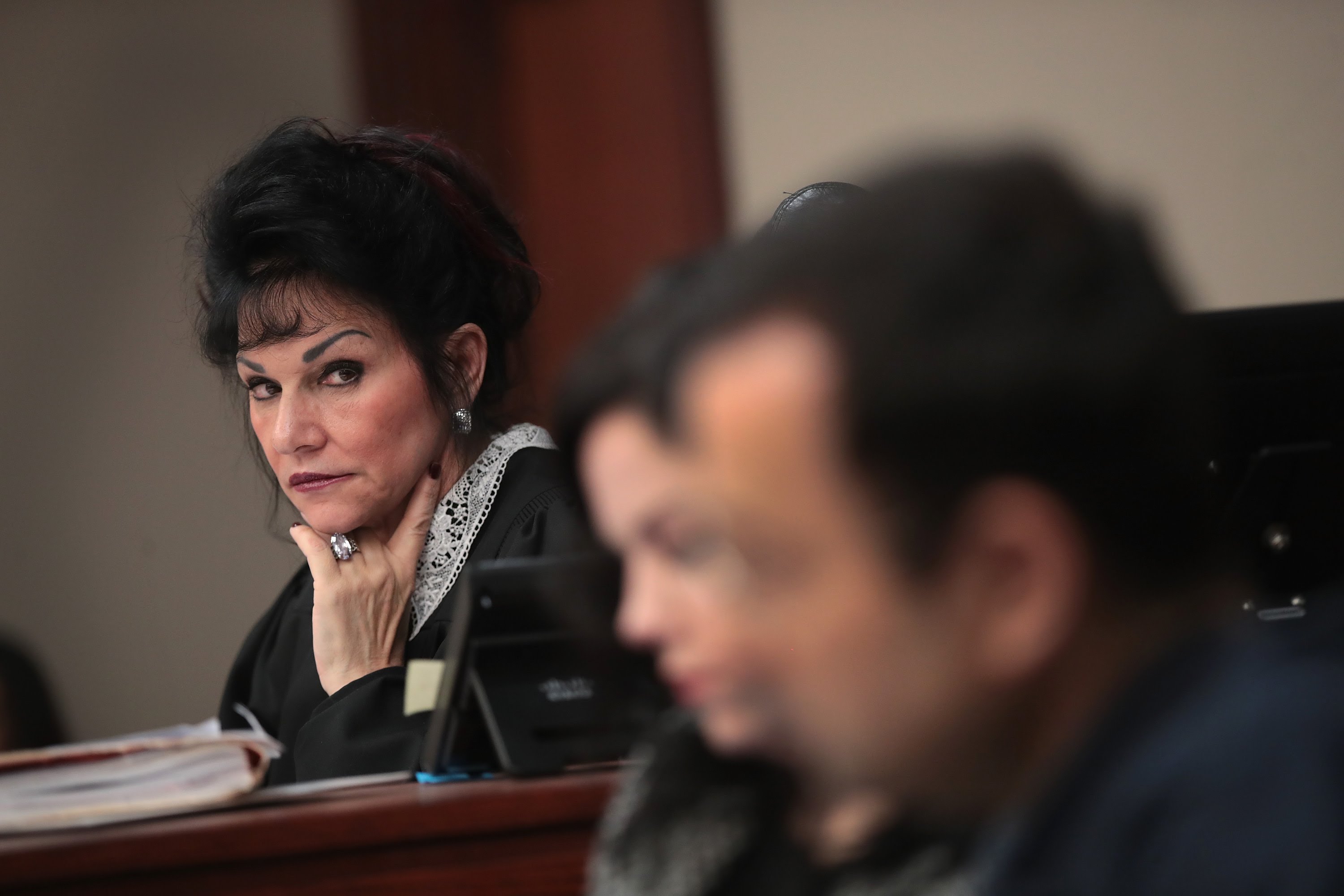 Rosemarie E. Aquilina, Ingham County, Michigan, Circuit Court Judge and adjunct WMU-Cooley professor, made news worldwide for her work presiding over the sentencing of disgraced former sports medicine doctor Larry Nassar. Yet, for those from the Lansing area, her reputation for outspoken advocacy was already solid. For Aquilina, giving those in her courtroom a voice was simply business as usual.

STAND UP AND SPEAK OUT

Aquilina has built her career and arguably, her life, on the premise that having a voice is essential to being an individual; someone able to define who they are, what they stand for, and how far they are willing to go to support their position. This commitment began in college at Michigan State University when she was an English major. Aquilina was planning to use her degree to become a writer, but her physician father questioned her on how she planned to support herself.

“I looked at (my father) and, knowing he’s a doctor and that doctors hate lawyers, I said, ‘I’m going to law school,’” she laughed. “My father has a tendency to use a big loud male voice, and not that I don’t love my dad, but I felt like I was going to be drowned out unless I shouted out, ‘I’m me, I’m going to be a lawyer, and I am going to continue speaking.’ And I have never stopped.”

When it came time to follow through on that law school commitment, Aquilina was once again certain of her path. Although her father may have wanted her to go to Harvard, Aquilina decided to attend WMU-Cooley Law School (Carr Class, 1984) simply because she loved Lansing and everything about living there.

Aquilina enrolled at WMU-Cooley Law School in 1980, one of few women there at the time, which led to the inevitable comments like, “Why are you going to law school?” “Why aren’t you having babies?” But she was not deterred. In fact, such stereotypical chatter only reassured her she was on the right path. Moreover, while she found herself among just a few women in her classes, she appreciated that women who had gone before helped to smooth the rocky road.

“In 1980, women were just breaking into those careers that men had. It was very challenging, but I wasn’t the first and I had it easier because of other women,” she said. “WMU-Cooley really embraced that I was a woman and accepted me, but said, ‘And you will prove yourself.’ And I did!”

Of all the things her years at WMU-Cooley have given her — either as a student or as an adjunct professor — Aquilina said the skill that has proven the most valuable is survivorship; knowing how to get along in the world, make the system work for you and help you excel. This, she said, is a uniquely WMU-Cooley gift to its graduates.

“I think WMU-Cooley, more than any other law school, prepares you to survive in the world,” said Aquilina. “To be on point, to be on time.” 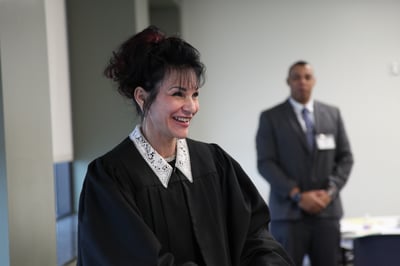 That was just the beginning of Aquilina making her voice heard concerning legal education at WMU-Cooley. She was given the dean’s blessing to teach that class and eventually came back with more class ideas that were also included in the curriculum, including elder law, animal law, and more. As the law school witnessed the success of the classes, Aquilina found it was ever more willing to take on new ideas.

“As WMU-Cooley grew, they recognized and listened to the needs in the community and the world,” she said. “So, whenever I brought a new class, like family law trial practice, they said, ‘Sure, what is it you want now? Ok, let’s get that information to our students.’”

The key to the success of all these new classes wasn’t just their addition to the mix, but that Aquilina also committed to teaching them.

In so doing, she knew she could help students develop and strengthen their voices, which in turn could give even the most silent a chance to be heard. 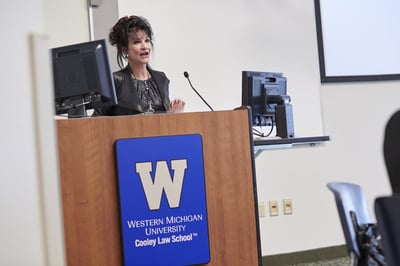 “I keep coming back as an adjunct professor for the students. It’s the spirit of WMU-Cooley, it’s that survivorship. It’s not just the lawyers we breed, but that those lawyers are out there. I know they are well trained, helping others have voices and making a difference in the world.” Also of importance to her students is how she zeroes in on ways to teach what they should know on the bar exam, ways they can remember things that can help them pass with less stress. “I give them little jingles like in family law and prenups. ‘Beyoncé gets it wrong. What it should be is: If you like it you should put a prenup on it,’” she said. “And they always write me back and say, ‘I remembered that! I remembered the elements! I remembered why it made a great record and I got 10 points on the family law section!’”

One lawyer and former student, Zachary Stempien, also noted how Aquilina’s teaching style and demeanor in the courtroom consistently showed her to be someone determined to protect and serve.

“Judge Aquilina was one of my instructors at WMU-Cooley Law School. From the very first class, I could tell that she was a very conscientious judge. She always considered and explained issues that may have seemed collateral to most,” recalled Stempien. “You could immediately tell that her main focus was on protecting those that needed to be protected, to the fullest extent possible. Judge Aquilina exuded a confidence that made it evident that her goal of providing justice would not be impeded by the fear of public perception and backlash. It was for these reasons that Judge Aquilina was able to handle the Nassar case with such determination and poise.”

Not surprisingly, Aquilina, the mother of five and grandmother of two, loves children, and through her teaching passes that love along to her students as if they were her family.

“I feel like all the WMU-Cooley graduates who I have taught, mentored, or had the honor of just being a small part of their lives are like my children,” she said. “So, to me that is the most tremendous gift, and it is worth more than any paycheck.”

That love and respect is returned many times over by those students who were lucky enough to be in Aquilina’s classes. Aquilina’s students and graduates have always reached out and stayed in touch. To Aquilina, it’s the result of something very simple — she listens. 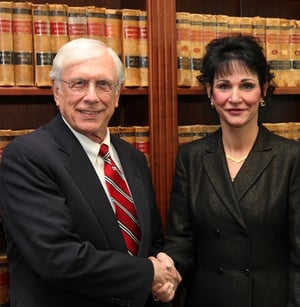 “I listen to them, not just in the class but personally,” she acknowledged. “There’s a lot of stress in law school, so I give them my take on whatever’s going on, whatever the question is. I become their other mother.” And she adds, more than once, when she was unable to make it to graduation, she has had students bring their mothers to her chambers and ask to take a photo of both “mothers” together.

Another key element that helps forge strong bonds with her students is that she doesn’t punish them for being unprepared, but instead works on preparation with them.

“Every case that we present, we work on together. So, I feel like we are a team and the grade they earn as a student is the grade I earn as a teacher. And I know it.”

Danielle Lofton, a third-year senior who will graduate in September, took Family Law from Aquilina and said she appreciates the way Aquilina uses anecdotal information to help students be prepared for the many realities of legal practice.

“Judge Aquilina requires students to complete in-class assignments that test their understanding and application of material to real-life scenarios that we may encounter with clients,” she said. “She motivates us to think outside the classroom, not just as students, but also as future attorneys.”

Aquilina’s style as a judge has been called unique by some, but in her mind, she simply runs her courtroom the way she thinks every courtroom should be run. Key to her service as a judge for the people, is her ability to listen to everyone. To Aquilina, everyone affected in each case deserves to be heard, to have a voice.

“I don’t just listen to the case in front of me, but to all the people who are affected by that case,” she said, adding, “there’s a rippling effect in many ways. I like to touch one person at a time and make sure that I am effective, that I have listened in each case and that everyone has had their day in court.”

And it’s not only allowing, but encouraging, those who are silent to have a voice, to be heard, that Aquilina considers the court’s responsibility.

Considering that Aquilina’s history includes a decade working for a state senator, 20 years as an officer with the Judge Advocate General (JAG) Corps. and the first woman officer in Michigan Army National Guard history, adjunct professorships at two law schools, being named as WMU-Cooley's 2011 Frederick J. Griffith III Adjunct Faculty Award recipient, publishing two novels, and raising five children, what could she possibly feel is left for her to achieve? Plenty! Look for Aquilina to continue to make her mark on this world.

Back in 2010, Rashida Tlaib was elected as the first Muslim woman to serve as a Michigan State...
Read More

Almost 42 years after being sent to prison for robbery and murder, two crimes he didn't commit,...
Read More