A Tale of Two Toms: How WMU-Cooley Law School Acquired Two Bronze Likenesses of its Namesake

WMU-Cooley Law School alum John Nocita (Turner Class, 1991) is profiled in the Winter 2020 issue of the alumni magazine Benchmark. The profile includes an account of his donation to the law school of an impressive bronze bust of Thomas M. Cooley mounted on a marble pedestal. 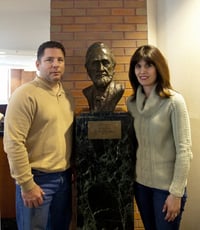 Nocita’s gift. The story is that a friend had given the bust to Nocita. He wanted to present it to the law school, but it was located in Washington, D.C. and weighed 2,000 pounds. With the aid of a forklift and U-Haul trailer, in 2014 Nocita and his wife Rose transported it on a perilous journey to its present home in the lobby of the Cooley Center building in Lansing. Until the pandemic forced classes online, law students streamed by it daily on their way to the elevators. “Cooley-Center Tom” must be very lonely these days.

For many years prior to the Cooley Center, beginning in 1974, Cooley Law School’s home was the Temple building. There, hundreds of students daily passed by another bronze bust of Thomas M. Cooley, on a four-foot high walnut base, at the top of the stairs leading to the lobby. Nowadays the bust of “Temple Tom” is even lonelier, as will be explained.

Prowse’s gift. The Temple bust bears a plaque explaining that it was “presented to the law school by Thomas L. Prowse in honor of past Associate Justice Michael D. O’Hara of the Michigan Supreme Court.” But who is Thomas Prowse? What was his connection to the law school and to Justice O’Hara?

Thomas L. Prowse was a Wayne State University law grad whose first  employment after law school was as a “roving” law clerk in the Detroit office of the Michigan Court of Appeals. At the time, the court was augmented by retired judges appointed for limited periods. They needed law clerks, hence rovers like Prowse. 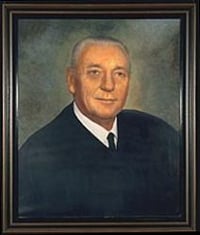 Michael D. O’Hara had been a Justice of the Michigan Supreme Court. He was defeated for reelection in 1968. Not yet of retirement age, he was appointed semi-permanently to the Court of Appeals until his pension kicked in. He retired from the Court of Appeals in 1975 and died three years later.

Why Cooley Law School? Prowse was assigned to be O’Hara’s law clerk. In 1973 he commissioned sculptor Robert Schefman to create the bust of Thomas M. Cooley to honor “his” judge, and then presented it to the fledgling law school. Why was Cooley Law School selected as the recipient? Prowse didn’t attend Cooley; nor, as far as is known, did he ever live in Lansing, or know the law school’s founder, Thomas E. Brennan, or any descendent of Justice Cooley.

Prowse died in 2019, so we’ll never know for sure. My theory is that his honoree may have suggested the location. O’Hara had served with Brennan on the Supreme Court, and would have been aware that his former colleague had started a law school in Lansing the preceding year. O’Hara never attended law school; he read the law under the supervision of Judge Leland Carr in Lansing. He may have regarded Brennan’s enterprise as a reincarnation of Carr’s “one-man law school.” 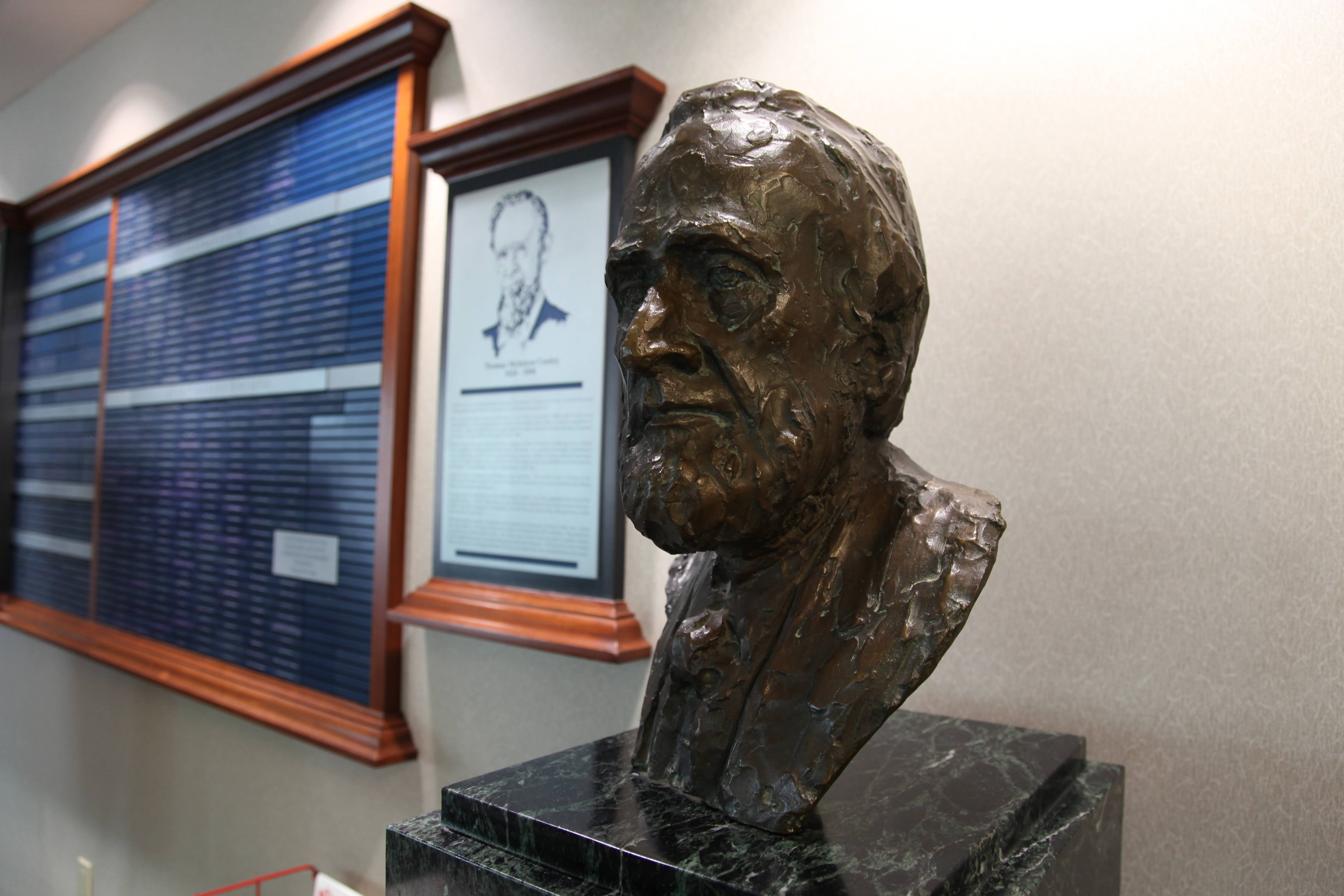 The Kidnapping. At one point “Temple Tom” survived a “kidnapping.” Distinguished Professor Emeritus William Weiner recalls the incident: “The bust disappeared, probably because it was poorly attached to the base. When it didn’t turn up quickly, amnesty was offered for a safe return.

“One morning it reappeared in a box on the loading dock at the old Admin. building on Grand Avenue. Later there was a clever article in the student paper, from the perspective of the bust during its captivity.” That episode led to the bust being encased in Plexiglas. Later still it was separated from its base and displayed in a recess in the wall between the lobby elevators.

In all, more than 12,000 Cooley graduates passed by “Temple Tom” while the Temple’s classrooms were in use.

Hiatus. The law school ceased holding classes in the Temple in 2008 and the bust was moved to a Cooley Center storage room. During the resulting a six-year hiatus the school’s namesake was not present to greet students heading for class. Thanks to John Nocita’s magnificent gift, that tradition has been restored—and will continue once this awful pandemic has passed.

Distinguished Professor Emeritus Otto Stockmeyer was Research Director for the Michigan Court of Appeals from 1966 until joining the WMU-Cooley faculty in 1977. He has written about his Court experience here. He understands the strong bond that can form between judges and law clerks, having previously clerked for Court of Appeals Chief Judge Pro Tem John W. Fitzgerald.

Coda. Things I learned while researching this blog post that didn’t fit the story line:

Thomas Prowse’s father died before he was born, in rural Kentucky. His widowed mother moved to Detroit to work at General Motors for thirty years, raising her only child as a single mother.

As a Marine in World War II, Michael O’Hara stormed the Okinawa beach from a landing craft, but ironically drowned in an Upper Peninsula lake when he fell off a dock.

The law school acquired the former Masonic Temple building with a $40,000 down payment toward a purchase price of $400,000. Over the next decade the mortgage was aid off and over $10 million was invested in improvements. In 2014 the building was listed for sale for $8.15 million.

Some of you may have already watched the movie and true story about Brian Banks. It recently opened...
Read More