WMU-Cooley "Down Under" Law Students Learn From Maori Elders

Students participating in the WMU-Cooley Study Abroad program in New Zealand contributed to a program for Kaumatua (Maori Elders) at the Kirikiriroa Marae in Hamilton (Kirikiriroa), New Zealand. In a day of meaningful cultural exchange, the students, along with faculty from WMU-Cooley, the University of Waikato Te Piringa Faculty of Law, and the McCaw Lewis law firm staff, were formally invited onto the marae by way of a formal powhiri. 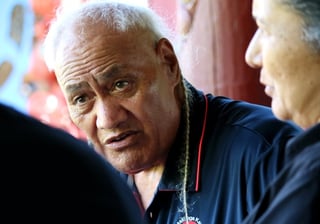 Historically, a powhiri, was an important way for a Maori hapu (a group of extended family, for whom the marae is a sacred ceremonial grounds) could determine whether an outside group were friendly or threatening. In history, a female elder (kuia) would chant a vibrant and beautiful song, called a “karanga” to call the visitors onto the land. We experienced this beautiful song. Each side sits facing the other. A male elder (koro) speaks in Te Reo (Maori language) about who his people are and greets the outside group. The outside group (in this case, us), has someone respond in Te Reo, to explain who the visiting group is and why they are there. Our speaker was Rawiri.Kerehoma-Hoerara, a law student and clerk at McCaw Lewis. 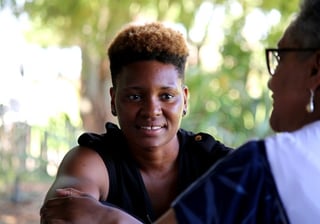 The entire Maori group then welcomed us with a song. Maori singing is always robust and heartfelt. After their song, our group of students, faculty, staff and law firm members sang a song of our own. Carefully chosen by the students, our group sang the song “Lean on Me”, which says, in part “You just call on me brother when you need a hand, we all need somebody to lean on.” The Maori loved this song and responded with big smiles. Next came the hongi, where each member of each group individually touches nose to nose and breathes in the life essence of the other.

After the powhiri, our group gained entry into the marae buildings. We were presented with a beautiful lunch and both sides had the opportunity to visit.

Next, we moved into a wondrously carved and woven whare-hui (ceremonial building), where a koro explained all the symbols in the building, and more songs were sung. 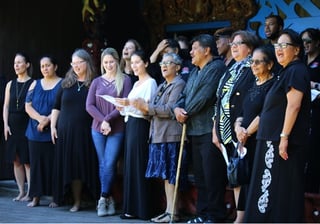 We began our program with the Kaumatua (Maori elders) who were there. Our students interviewed small groups of kaumatua about their lives. The interest between the students and kaumatua was mutual, and for about an hour, the lawn buzzed with fascinating and meaningful conversations. Then, University of Waikato lecturer Marie Were, WMU-Cooley Professor Kim O’Leary, and McCaw Lewis attorney Leone Farquhar discussed elder law, the importance of purpose and how to plan for more control over decisions later in life.

After the program was over, the entire group sang "Lean on Me" together and took pictures. It was a fantastic day, one that the students will never forget.

Tēnā kotou katoa,
Greetings to you,

Ko te tūmanako, kua tūtuki pai ai ō whāinga i tēnei haerenga.
We hope that you achieved your goals on this visit.

Mauria atu ngā āhuatanga katoa o te iwi o Aotearoa hei huarahi pai mā kotou.
Hold on to the teachings you have learned in New Zealand as tools to enhance and guide you on the right
pathway.

Ngā manaakitanga a te runga rawa ki a kotou katoa.
May the Lord bless you all.