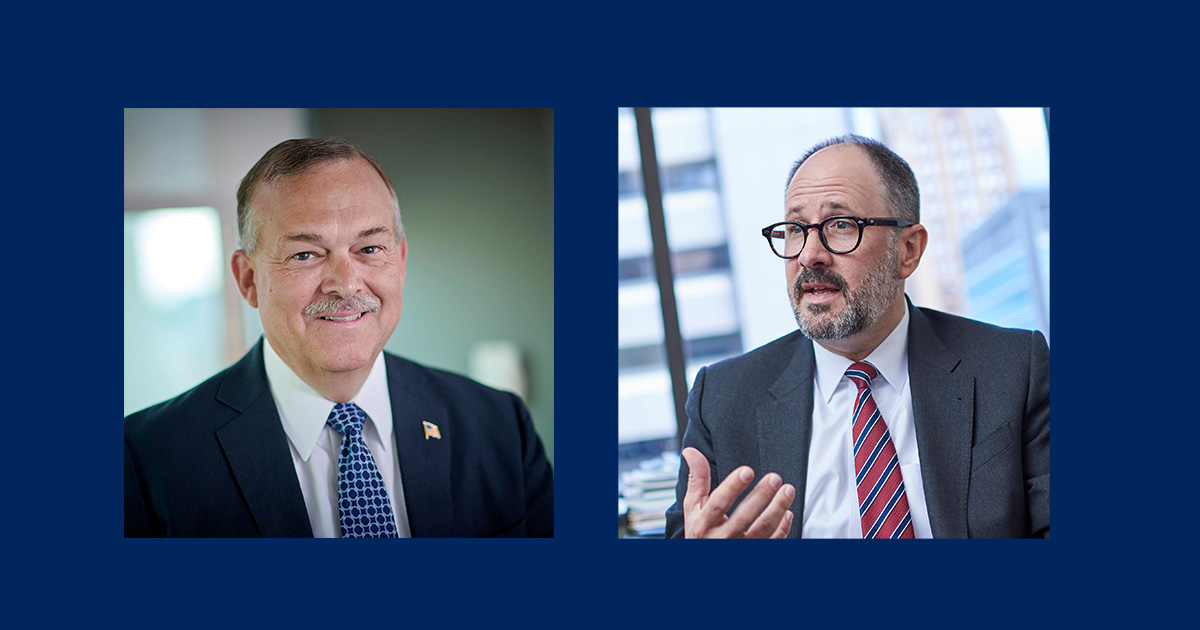 As the Russia-Ukraine War continues, WMU-Cooley Law School Professors David L. Finnegan and retired Brigadier General and former Deputy Assistant Secretary for Homeland Defense Michael C.H. McDaniel, experts on international law, have created a video-blog series sharing various interpretations of international law as it pertains to Russia’s invasion of Ukraine. The first three video-blog posts take a look at three important topics when looking into the violation of war crimes. Hosted on WMU-Cooley’s blog site, the video blogs also can be found on the WMU-Cooley Law School YouTube channel and are available for members of the media to share with their audiences.

In the first blog, War Crimes and Crimes Against Humanity, McDaniel and Finnegan discuss war crimes in the ongoing Russian invasion of Ukraine. The subject matter experts break down how international law views war crimes and how individuals can be considered war criminals. Topics reviewed include bombardment without consideration of civilians and their assets, collateral damage, or the incidental death of civilians, and other principals being used during the conflict that could be considered war crimes.

Finnegan said, “The most important sources of law when it comes to war are the Geneva Conventions that were agreed to following World War Two, and among the most important rules built into that legal frame work is concern for civilian populations and wanting to make sure that civilians are protected from the ravages of war.”

While sharing how the law of war goes about protecting civilian populations, McDaniel said, “The principals (of protecting citizens) predate the Geneva Conventions by thousands of years. Military necessity is the idea that you can only use the amount of force, you can use overwhelming force and you can use it very quickly because you want to ensure the submission of your enemy.”

The second video blog, Use of Prohibited Weapons, takes a deep look at the law of war bans certain types of weapons, as well. McDaniel and Finnegan give their thoughts on the allegations that Russia is using certain prohibited weapons, such as cluster bombs and thermobaric weapons, thereby violating the international humanitarian law of war.

“The law of war also establishes rules for the types of weapons that countries may lawfully use during armed conflicts and bans certain types of weapons,” said Finnegan. “There are a number of treaties and other international agreements that attempt to impose restrictions on the use of certain weapons systems or regulate the use of weapons.”

It is widely documented that Russia has deployed the use of cluster bombs against Ukraine, said Finnegan, who then asked McDaniel to comment on why are they of questionable legality?

“They detonate upon landing and then they fragment,” said McDaniel. “It is the high potential for them exploding indiscriminately and thereby hitting civilian populations, which makes them so dangerous. There is in fact a convention on cluster bombs that was signed in 2008, fairly recently, and it prohibits not just the use, but the production, storage or transport of cluster bombs.”

Crimes of Aggression is the third topic covered in this series. Professors Finnegan and McDaniel discuss the international crime of aggression, committed by political leaders of an invading country. The WMU-Cooley professors evaluate whether Russian President Vladimir Putin can be prosecuted, referencing consequences given to leaders that implemented international war in the past.

“The Nuremberg Tribunal prosecuted Nazi leaders as war criminals after World War Two famously referred to the crime of aggression and crimes against peace as the ‘supreme international crime,’” said Finnegan. “I think what the tribunal was getting at is that all other war crimes sort of flow from aggression, that is, without the unlawful war there would be no war crimes to begin with. Aggression opens the door to further atrocities.”

While discussing whether Russia’s actions are an unlawful act of aggression and if Vladimir Putin can be held criminally responsible for committing acts of aggression, McDaniel said, “I immediately think about the principle of command responsibility. I think that would apply to the crime of aggression as much as it applies to other war crimes. The idea of command responsibility is the idea that the superior officer, the military leader, knows that, or should have known, that war crimes are being committed by his troops, or learns about them afterwards. The question becomes is there a failure to take necessary and full measures, reasonable measures, to prevent this from occurring as you look at the actions of Putin.”