After graduating from WMU-Cooley Law School in January, Geofrey Bilabaye will work as a research attorney at the Michigan Court of Appeals. Read about Geofrey's journey from Tanzania to a legal career in the Legal News story by Sheila Pursglove below.

Geofrey Bilabaye hails from a small town in Tanzania and grew up in Dar es Salaam, the largest city in East Africa. His father was in law enforcement, the equivalent to a police chief in this country.

“One of my favorite memories from childhood is my dad teaching me how to pronounce Criminal Law—those might have been my first English words,” he says with a smile. 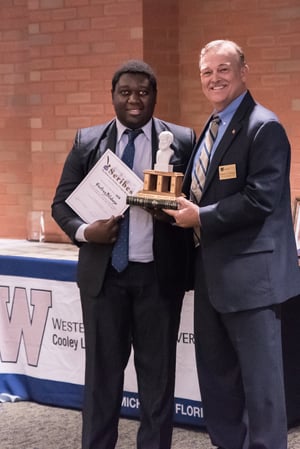 Bilabaye, who will graduate from WMU-Cooley Law School in January, earned his undergraduate degree in computer science from Central Methodist University in Fayette, Mo.—and notes there are many similarities between programming and the law.

“The principles of law involve the same logical sequences and reasoning as coding a computer program,” he says. “To go on to law school was a natural progression and being a lawyer would be a combination of my two passions.”

With an ultimate career goal of becoming a federal or state appellate judge, Bilabaye has enjoyed the academic rigors of Cooley Law. He also enjoyed the law school’s practical learning environment, and was a member of three successful national competitions and winner of two intra-school Mock Trial and Moot Court competitions.

“These competitions helped me hone my oral argument skills, but most importantly, they helped me know what to expect when I become an attorney.”

“Technological advancements have allowed the world to become connected more and more, and international law takes a special place in how we interact with other countries,” he says.

Solicitation editor for the school’s Law Review, Bilabaye also served as an associate editor for the Homeland and National Security Law Review—and his article for the latter, “One Nation, Under (a Christian) God: The Illusory Constitutionality of Trump’s Muslim Ban,” will be published in the spring.

A member of the Black Law Students Association, Bilabaye was honored in 2016 with the BLSA’s Vivian Onuoha Unsung Hero Award, for his commitment to academic excellence, dedicated service, and outstanding accomplishment.

He served in many leadership capacities during his law school years, including as co-founder of an International Dinner for World Celebration Day; co-founder of the American Constitution Society chapter, Lansing campus; vice president of the International Law Society; and was a member of the Mock Trial executive board; chairman of the Student Bar Association Budget and Finance Committee; and social chair of the Christian Legal Society.

This fall, he externed for Judge Douglas B. Shapiro at the Michigan Court of Appeals, helping the judge draft documents for the judicial opinions—and will return to the COA after graduation, as a research attorney.

“I got to really appreciate the magnitude and the level of hard work that goes into the workings of the court,” he says. “I enjoyed the challenges of researching and writing, and I can honestly say working for Judge Shapiro was the highlight of my law school career.”

He terms his earlier work at the Washtenaw County Public Defender Office, “simply exhilarating,” where he had the opportunity to argue on record, under Michigan Court Rule 8.120.

“I defended real clients, in real cases, in front of real judges,” he says. “But most importantly, working there helped me get a real understanding of how the criminal justice system works, especially when it comes to indigent defendants. I learned a lot more than I could have learned in a classroom and I loved every moment of it.”

Winner of a slew of awards at the recent Honors Convocation, including the Alumni Association Distinguished Student Award, Leadership Achievement Award, National Order of Scribes, Aristotle Award for best advocate in Intraschool Moot Court Competition, and a NS Certificate of Merit in Advocacy, Bilabaye also worked as a teaching assistant.

“Not only does it make me feel good to help a fellow student, but also teaching reinforced the materials, so I could have a better understanding of them,” he says. “Even though the goal is to help a fellow student achieve mastery of the topic, I always found myself learning more and more, no matter how many times I may have revisited the subject or a topic.”

Bilabaye and his wife make their home in Lansing, with their cat, Maggie.