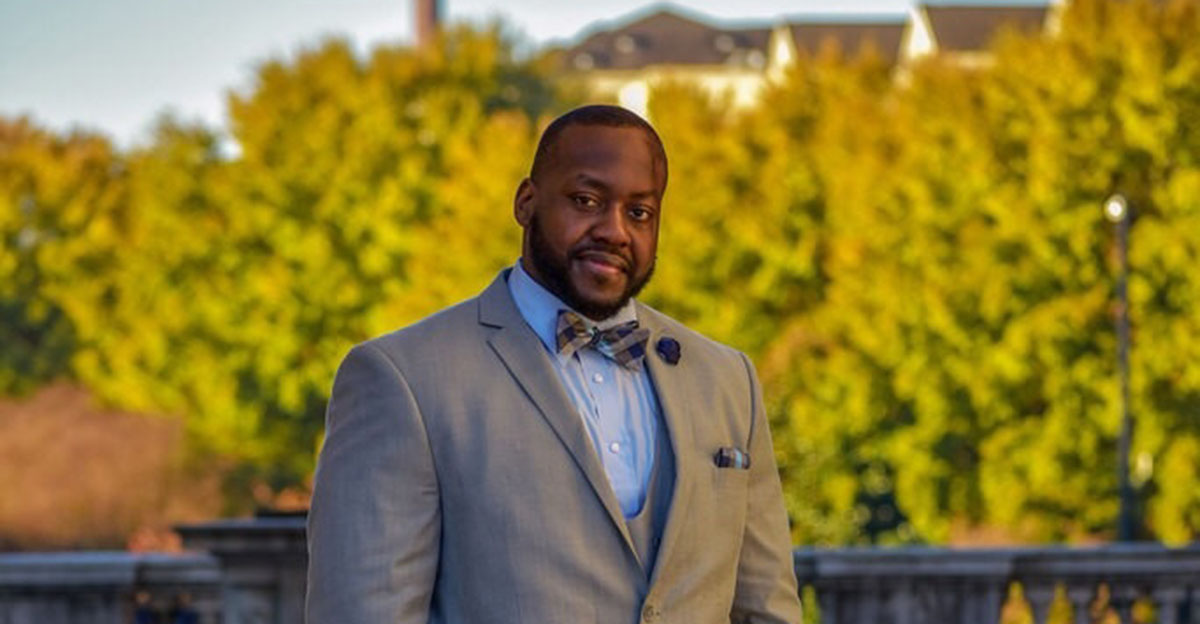 “Calm” is not a word that typically springs to mind when thinking about the practice of law – particularly criminal law. From stressed attorneys to frantic defendants, looming deadlines, over-crowded trial calendars, and high-stakes courtroom drama, “calm” just isn’t an adjective that typically gets put into play in the legal arena.

But standing tall in the midst of this daily activity is the very epitome of calm – Georgia defense attorney Ifeoluwa R. Ben-Shidah, or “Olu,” as he is called.

Olu (Duvall Class, 2014) has a strong track record of getting things done. He has so many cases before the court that one judge dubbed the docket “the Ben-Shidah calendar.” And his skills are noteworthy enough that he was recently named one of the National Trial Lawyers Association’s Top 100 Attorneys in the state of Georgia, and one of The National Black Lawyers Top 40 Under 40.

But he does it all without drama or fuss, without taking umbrage at the “slings and arrows” that are so often a part of litigation. “I just put my head down and fight for my client,” Olu said.

“People ask me, ‘Why are you so relaxed?’” Olu chuckled.

There’s a good reason for Olu’s unflappable approach to life and problem solving. Anything life can throw at Olu, he’s experienced worse. Much worse.

It was on Olu’s eighth birthday that tragedy struck back home in Lincoln, Rhode Island. While waiting in the family van with his sisters and cousins, the gear shift got jostled out of park and the vehicle went rolling backward down the hill. Olu jumped out to run get help, in an attempt to save his little sister and cousins. He got dragged underneath and the van ran over his body, impacting his head and dragging him 30 feet.

Olu recalled, “But God; An angel somehow got to the van and stopped it,” and the youngster was rushed to the hospital. The prognosis was grim at first. “They thought I was either going to die or be handicapped,” he said. But after a month or so in the hospital, the resilient Olu proved them all wrong, and not only survived, but thrived.

Olu’s biggest worry after he recovered enough to return to school, was whether his classmates would make fun of him. His fears were completely vanquished when the second-grader was greeted, not with jeers, but with cheers and heartfelt hugs from all his friends. “The hugs,” he reflected. “That’s what I remember.”

These philosophies serve Olu well, both for his own peace of mind and to impart a quiet strength to his clients, whose problems he does solve.

Olu is owner and operator of Ben-Shidah Law Firm in Newnan, Georgia. He opened his practice in October 2018 after serving as a lead litigation Assistant District Attorney.

Olu is one of those guys who has pretty much always known he wanted to be a lawyer. Growing up, Olu spent hours with his mom watching television lawyer and crime shows. From about ages 7-10, he saw every episode of Matlock, First 48, and Forensic Files that came on TV, he chuckled.

He didn’t quite get some of the shows’ nuances – Olu recalled that as a youngster, “I didn’t understand the different sides,” but he was riveted by the courtroom action. “Matlock was always doing trials,” he said, adding that he quickly learned that criminal law was the field to pursue if he wanted to maximize his trial time. 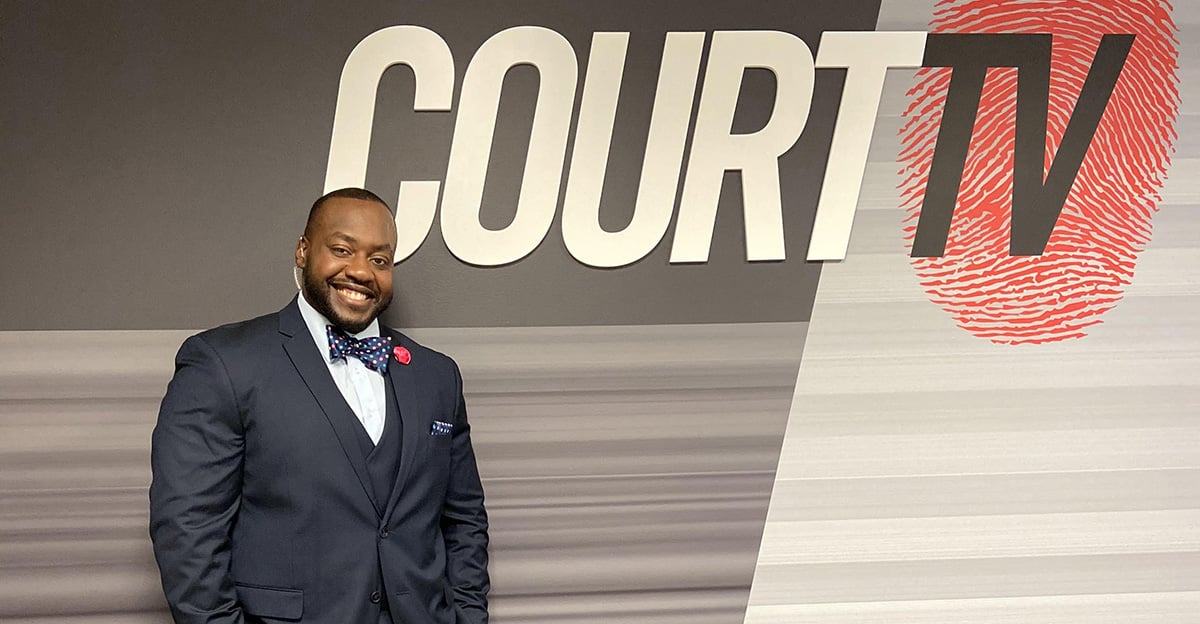 While criminal law is a good fit for Olu, life as a prosecutor was not. Even though he was getting plenty of litigation action – 12 jury trials in his first year alone – he felt like he was on the wrong side of the courtroom. It was a valuable experience, though, Olu recalled, giving him confidence and trial experience, and setting him up to be a better defense attorney.

For a variety of reasons, however, it was time to switch sides. In addition, Olu knew he wanted to have his own firm. He grew up in an entrepreneurial family. His grandfather owned a gas station, and his father owns a construction business, so working for himself is in his blood.

It can be scary to make the switch from the guaranteed paycheck of a government job to working for yourself, but Olu prayed about it, had faith, planned well, and took the leap. Although imbued with confidence, even Olu was surprised by the speed of his success. In the first month alone, Olu surpassed his financial expectations. “It’s been a blessing ever since.”

Following a successful strategy he used when searching for his externship in law school, Olu had classy business cards printed up, resume freshly fixed, and a summary package about himself, and then he plunged into networking. He handed cards out at events, the courthouse, and other places. “I had to have emailed at least 100 attorneys when looking for an externship before graduating law school. Some replied with a no, some did not reply at all. Three gave me the opportunity, and that made all the difference. It goes to show out of 100 no’s, you only need a single yes.” He quickly found that people he’d come to know as an assistant prosecutor remembered his drive, willingness to listen, and ability to get things done.

“Word of mouth is a big marketing tool,” he said.

Word of mouth reaches Olu’s potential clients by way of television also. He’s been a frequent case analyst on Court TV, he’s done podcasts, and radio interviews. First connected by a friend who gave his name to a producer, Olu finds the work to be a great opportunity. They give him a case, he analyzes it, then appears on the show talking about the legal ins and outs of the case.

Olu, who, in addition to his prosecutorial jobs, also works for a private practice in Georgia, strongly recommends getting some experience before venturing out on one’s own. “If you can work with someone for one year, make mistakes on their dime,” he advised, you can get up to speed with a handy safety net. Once they’re on their own, Olu recommends that attorneys continue networking, set up a good website, be unfailingly polite and professional with everyone, and share business cards.

The business cards that Olu now uses may cause law enforcement to roll their eyes, but they’ve proven invaluable to potential defendants. The front contains his name and the usual contact information, of course, but the back lists a person’s rights. The #1 rule? “If the police pull you over,” Olu advises, Don’t Say Anything.” The card actually states “I will not be taking any questions.”

Olu is an empathetic advocate for his clients – he knows where a lot of them are coming from. The landing page of his website assures clients from the outset that “a mistake should not define someone.” Olu knows from experience that people can learn from their mistakes and go on to live their best lives. As a young man, he was edging toward trouble due to his surroundings, and was no stranger to gang activity, drugs, and other crimes.

Olu wasn’t in a gang, but he was headed in the wrong direction. He did the Scared Straight program three times before the message sunk in. When it did, however, it did so in a life-changing way. “I could see how the system could work against a person,” he explained. “I understand where they were coming from.”

That life experience helps when people come to him for assistance.

Victory doesn’t always mean a win in court. It can be a major success just getting charges reduced, Olu explained. Georgia can be a harsh environment when it comes to charges against a defendant – even traffic matters can be criminal offenses in the state. Defendants can also spend an inordinate amount of time in jail awaiting trial, and Olu takes great pride in getting clients out of jail so they can live their lives while awaiting their turn in court.

Olu is a realist – he knows not all clients are innocent. He also sees his job as making sure those clients’ rights are protected, getting the best possible outcome, and making sure the prosecution does its job fairly.

“I’m not necessarily trying to get them off. Everyone is entitled to have their rights protected. That’s what I’m here to do. If you’re trying to convict my client, you’re going to have to do the work. I do the best job I can to protect their rights,” Olu explained.

Olu is happily settled in Georgia, and part of that contentment is having sought out other states to experience. He started out in a community college in Rhode Island, then earned his bachelor’s at Western Carolina University in North Carolina (where he also played Division I football). He earned his J.D. at WMU-Cooley because he wanted to experience Michigan (and lucked out with mild winters). Olu also did his final semester of law school at WMU-Cooley’s campus in Florida so he could try out that state as well. But Georgia won his heart as a home for practicing law.

Olu lives in Newnan with his wife, Timesha, and he has three children, Andrea, Josiah, and Amara. He is thrilled to be living his best life in the Peach State and doing the utmost for his clients.

WMU-Cooley student Shekinah Apedo's first name in Hebrew means "In the Glory of God." As a social...
Read More

WMU-Cooley Grad Kate Barnaby: Everything You Do has a Ripple Effect

Growing up, WMU-Cooley graduate Kate Barnaby remembers how much she loved learning about our legal...
Read More