Following the tragic events in Las Vegas, Homeland and National Security Law expert and WMU-Cooley Associate Dean Michael C.H. McDaniel was contacted by media outlets to comment as an expert resource. Dean McDaniel provided analysis about the shooting that killed 58 individuals who attended the Route 91 Harvest Festival. He also talked about various methods law enforcement and venues use to prevent tragedies and how individuals can protect themselves at large-scale events. 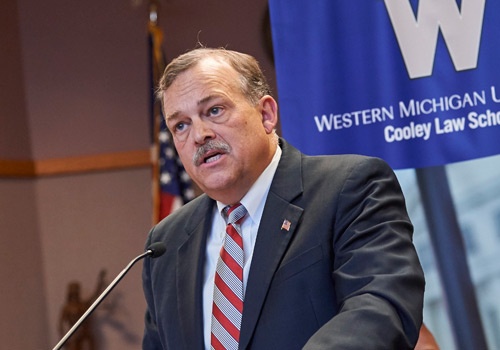 Michigan’s Big Show with Michael Patrick Shiels talked about how terror organizations like ISIS and Al Qaeda have claimed for years that Las Vegas would be a target for their terror operations. Dean McDaniel was also asked about security at major outdoor events and what can be done to protect those in attendance. To hear Associate Dean McDaniel’s complete interview with Michael Patrick Shiels click here.

WKAR’s Karel Vega asked Dean McDaniel about the steps the Michigan Department of Emergency Management and Homeland Security will take to increase security and how he feels the impact of this tragedy will have on the gun control debate in the United States. Listen to the full interview here.

Dean McDaniel joined FOX 2 Detroit anchor Huel Perkins to analyze motives and to discuss ideas about creating safer outside events, which include a greater secure zone, limiting access, and an in-depth evacuation plan. To view the full interview click here.

During an interview with the Lansing State Journal, reporter Sarah Lehr spoke with Dean McDaniel about safety during large-scale sporting events, such as this month's Michigan v. Michigan State football game. Dean McDaniel said, “Bag searches and widespread security camera usage are some of the most effective ways to prevent attacks at sports arenas.” He also talked about other key safeguards, including a clear evacuation plan and advising individuals to “make note of the exits as soon as they enter a crowded venue.” The full article can be read here.