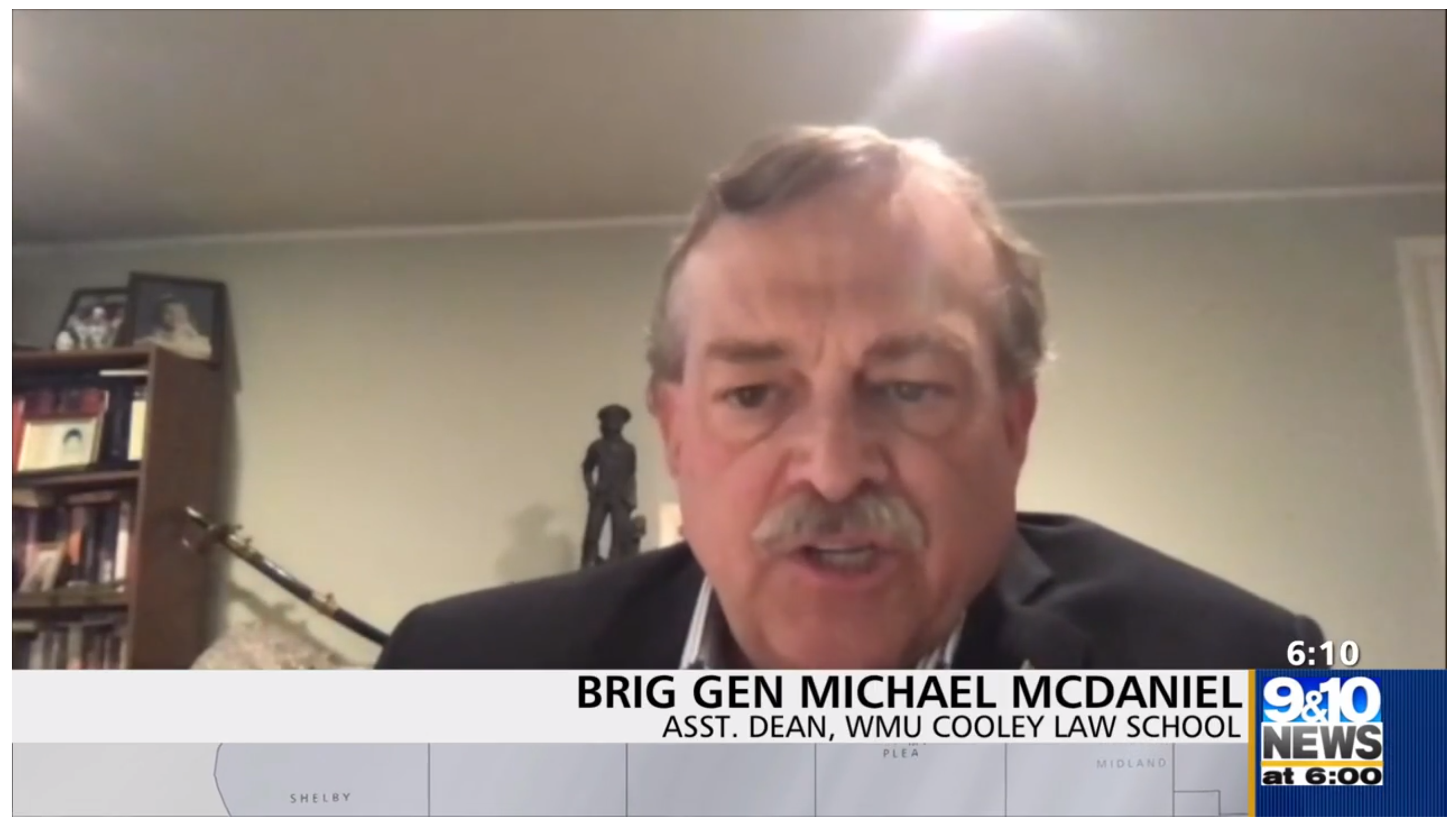 Former Deputy Assistant Secretary for Homeland Defense Strategy and retired Brigadier General Michael C.H. McDaniel, associate dean at WMU-Cooley Law School, was sought out by the media to explain how President Donald Trump can use the Insurrection Act to help control riots.

“It’s not something that can be done quickly if it’s going to be done,” he told Shiels, noting that the last time the Insurrection Act was used was during the Rodney King riots in 1992 when George HW Bush was president. “I think you really truly have to have a situation where it is out of control. Just trying to prevent looting with federal troops or any sort of armed forces is very difficult. The military is not trained to use restraint and force like law enforcement is – they certainly can do that, but it is not their primary role, and it’s only to be used as a last resort.”

McDaniel advocated taking a more diplomatic approach first – taking time with negotiations and discussions – similar to the one that President George Washington used during the Whiskey Rebellion of 1794.

“I certainly agree there’s a greater need for empathy and unity,” McDaniel said. “I will say that troops have been used when rioting has gotten out of control many times in our country. But as I’ve said, it should be a last resort.”

McDaniel shared with WKZO and WGVU that the president does not need anyone’s permission to enact the Insurrection Act.

“There’s a popular misconception that it can only be used like the Stafford Act for emergencies and disasters, but in actuality, the president can invoke it on his own,” he said. “It doesn’t happen as often but there is a section, which says it can be used to enforce the federal laws. So if the president believes that the uprising or assemblage or rebellion makes it impracticable to enforce the laws of the United States in any state in other course of judicial proceedings then it can send in the military to do so.”

There are three main parts to the Insurrection Act:

During his interview with WFLA Radio in Tampa Bay, Florida, McDaniel shared that a majority of U.S. citizens are against the idea of the military being used for law enforcement or any domestic purpose within the United States itself.

On WTSP in Tampa, McDaniel said a president enacting the Insurrection Act is an unusual circumstance: “Make no mistake – even though it’s been done two dozen or more times, it’s still a big deal,” he said.

McDaniel explained on Newsmax TV’s National Report (@ 2:47:03) that looting, vandalism and violence is not the same as a breakdown in city and state government, which is what the Insurrection Act presumes.

“It’s ongoing criminal activity, but it is not of the quality, it is not of the intensity that is necessary for the Insurrection Act,” he told Newsmax’s Emma Rechenberg. “The Insurrection Act presumes that the state government is incapable and unable to protect its citizenry and to enforce federal laws or to enforce the civil rights of its citizens. So it truly is to be used as a deliberate measured response use of last resort.”

McDaniel, who joined the WMU-Cooley Law School full-time faculty as a professor in the Constitutional Law Department in 2010, and developed an LL.M. program in Homeland and National Security Law, teaches courses on the use of military force in the United States.