On Friday, Feb. 15, President Donald Trump declared a national emergency in order to fund a wall along the U.S.-Mexico border. Following President Trump’s announcement, Constitutional professors from Western Michigan University Cooley Law School responded by releasing a joint statement about the National Securities Act and an analysis of what our Constitution says and what it means for our democracy.

The statement reads: “Over the years, Congress has delegated expansive powers to the President to declare national emergencies. This delegation of emergency powers poses a threat to the delicate separation of powers between Congress and the President set forth in the Constitution. The President’s declaration of an “emergency” allowing him to fund the border wall is the latest test of the emergency powers statute and will surely lead to a dramatic expansion of presidential powers if left unchecked.”

In addition to the statement, Professors Brendan Beery and Gerald Tschura, Assistant Dean and Professor Devin Schindler, and Associate Dean and Professor Ret. Brig Gen. Michael C.H. McDaniel were called upon by media outlets across the nation to provide their subject matter expertise about the constitutionality of executive powers and the National Emergencies Act. 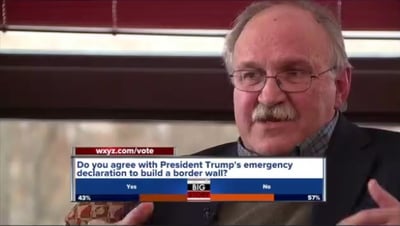 “I think it’s always been understood that the National Emergencies Act as it’s always existed was there to give certain authority for the president to act when Congress hasn’t had the time to act or hasn’t had the opportunity to act,” Tschura told WXYZ TV in Detroit. “The difficulty in this particular situation is, in fact, that Congress has acted.”

During an interview on WPHM Radio Tschura explained the president’s declaration is “the first time that the president has used his emergency power to get funding when congress has just spoken and said ‘this is the funding.’”

On WFLA AM radio in Tampa, Florida, Beery explained that the president could get the border wall funded, but not without legal ramifications. 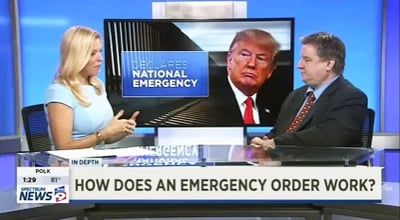 “You can see the possibility that the Supreme Court would say, even if the president is technically out-of-bounds, that it’s not up to courts to stop him,” Beery said. “That is to say it's a political question, but it’s one that involves a fight between the president and Congress and let them fight it out.”

Beery also explained on TalkingPointsMemo.com that several aspects of Trump’s remarks could be used to argue that a real national emergency was not in the front of his mind as he announced the new funding. During the announcement, Trump said: “We have far more people trying to get into our country today than probably we’ve ever had before,” and that “we’ve done an incredible job in stopping them 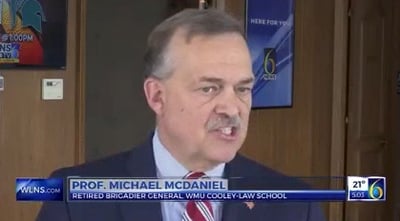 “That cuts against an emergency,” Beery told TPM, as does Trump’s line that a wall would make the job “very easy.” Beery argued that a comment like that is different than saying “the wall is necessary as a response to an emergent threat.”

McDaniel, a retired brigadier general in the Michigan Army National Guard, told Law360 this is one of the limited cases, like the House of Representatives v. Burwell case challenging Affordable Care Act administrative decisions, where a judge may grant legislative standing "when it is a matter of interpreting the constitutional powers of each branch." 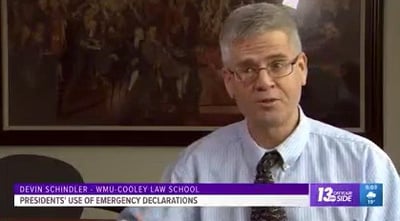 "It can't be denied that the executive branch asked the Congress twice for the money to build the wall and twice was turned down," McDaniel said during the interview.

On the Pledge Radio in Holland, Michigan, Schindler stating president’s declaration is a “classic constitutional conflict.”

“I know lawsuit litigation is coming down the path, but I’m not sure if it’ll make a difference at the end of the day because the president is bound and determined to do this,” Schindler told The Pledge. “Whether he wins or not is a wholly different question.”