Up to the Challenge: Cooley Grad Succeeds Against Series of Overwhelming Odds

Diagnosed with Hodgkin's Lymphoma Stage 2b unfavorable with bulky disease during the beginning of her 2L year, Norris has since had a total of 58 bags of chemotherapy and an autologous stem cell transplant.

“I immediately knew I wanted to continue my education, even if chemotherapy would slow me down,” she says. 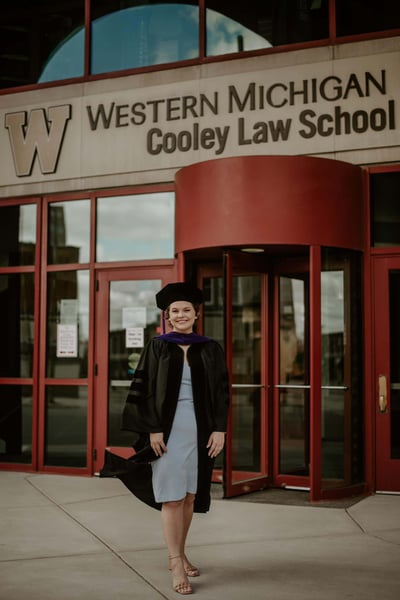 “Many people act like it's heroic to continue law school throughout treatment, but I don't see it that way,” she says. “When you get sick you have a choice: stop your life and focus solely on treatment—which no one would blame you for— or try and keep some normalcy during treatment.

“School honestly helped me feel normal while being sick even though what I was going through was anything but. I often attended class from a hospital bed and I even took four final exams in the hospital during my stem cell transplant. At Cooley, we always talk about ‘grit’ and I truly believe if you have ‘grit’ and determination, you can do anything you set your mind to.

“I was definitely not a 4.0 student during treatment, but I didn’t want to use what I was going through as an excuse because I made the decision to stay in school,” she adds. “I made the Dean's List while undergoing treatment because I stayed organized and kept my priorities in check. Even on days where I could barely open my eyes, I tried to do something productive. I’m most proud about my last semester at Cooley when I took 17 credits and received all A's and one B-minus. I had three surgeries and maintenance chemo during my last semester and still accomplished this.”

Norris, who holds a Bachelor of Applied Arts in Communication from Central Michigan University, with a minor in Legal Studies, has wanted to be an attorney as far back as she can remember.
“I’ve always had a passion to advocate for people and I excel with interpersonal communication as well as public speaking, so I figured I could use my voice to help the voiceless,” she says.

Despite the often overwhelming challenges, Norris enjoyed her law school experience at Cooley’s Auburn Hills campus, where at graduation she received the SBA's Distinguished Student Award; and also served briefly as treasurer for the Organization of Women Law Students (OWLS) before her cancer kiboshed that role.

“The community at Cooley—whether it be the deans, professors, office support, or students—are so warm and welcoming,” she says. “Everyone genuinely wants you to do well, so as a student you never feel alone or in the dark.”

Her passion has always been in criminal law, and she hopes to practice criminal defense.

“I absolutely love litigation and the endorphins it releases,” she says. “Because I was sick for most of law school I was unable to get a lot of real world experience, so I could see myself working at a prosecutor's office for the first two years to learn as much as I can. I also love estate planning and family law and hope to do that on the side.

“I had an amazing opportunity to practice as a student attorney for the Sixty Plus Estate Planning Clinic. I was able to draft a full estate plan for two individuals and it gave me fundamental skills that I will carry with me into my career.”

Norris also plans to help others who face similar challenges.

“No one chooses to have cancer and the financial obligations that come with being sick are unreal,” she says. “I hope to use my skills as an attorney, specifically my simple estate planning knowledge, to provide pro bono services to those in the cancer community.”

Remote learning during the pandemic turned out to be a blessing in disguise.

“If it weren't for the pandemic requiring us to attend class online, I would have had to drop out of school while I was sick,” she says. “I was able to still attend lectures throughout treatments. My professors were extremely understanding about me keeping my camera off and so kind whenever I would choose to display my bald head on camera for all of my classmates to see.” 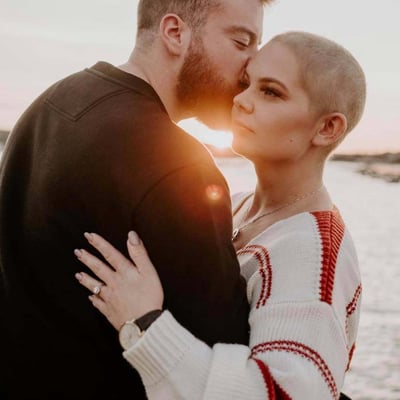 A Macomb Township native, Norris now makes her home in Auburn Hills with her husband Kyle Dubrul ; and the couple plans on purchasing their first home somewhere in the Metro Detroit area. She is extremely close to her parents, Scott and Laura Norris.

“They kept me motivated in times when I felt like I was too sick to continue,” she says. “They would reach out to my dean when I was unable to finish an assignment because of chemo or surgeries and help me make arrangements.”

Her husband Kyle proposed a month after Norris had a life-saving stem cell transplant and the two got married soon afterwards.

“He’s the most supportive, caring, and kind person I’ve ever met. We’re having a formal wedding with our family and friends in September 2022 when I have more hair,” she says with a smile.

In her leisure time, Norris loves spending time on her parents’ lake in northern Michigan with her husband, family and friends, and her dog, that has the appropriate legal monicker of Judge.

“He’s an English Springer Spaniel and brings me the most joy and unconditional love,” she says.

Norris also is a mentor for young cancer patients—“Something I hope to do for the rest of my life,” she says.

“I hope that by sharing my journey I can encourage others to never doubt their inner strength and the community around them because with both of those things you can accomplish anything, like beating cancer and receiving a Juris Doctorate.”

This article about WMU-Cooley Law School graduate Samantha Norris was written by Legal News writer Sheila Pursglove originally published by the Legal News on May 21, 2021. Reprinted with permission of The Detroit Legal News.Photos courtesy of Claire Abendroth.

WMU-Cooley Law School honors all its students during graduation, but only one stands alone above...
Read More

5 Things I Learned as a First-Year Law Student

Law school isn’t like any other college experience you may have experienced. The unique demands on...
Read More