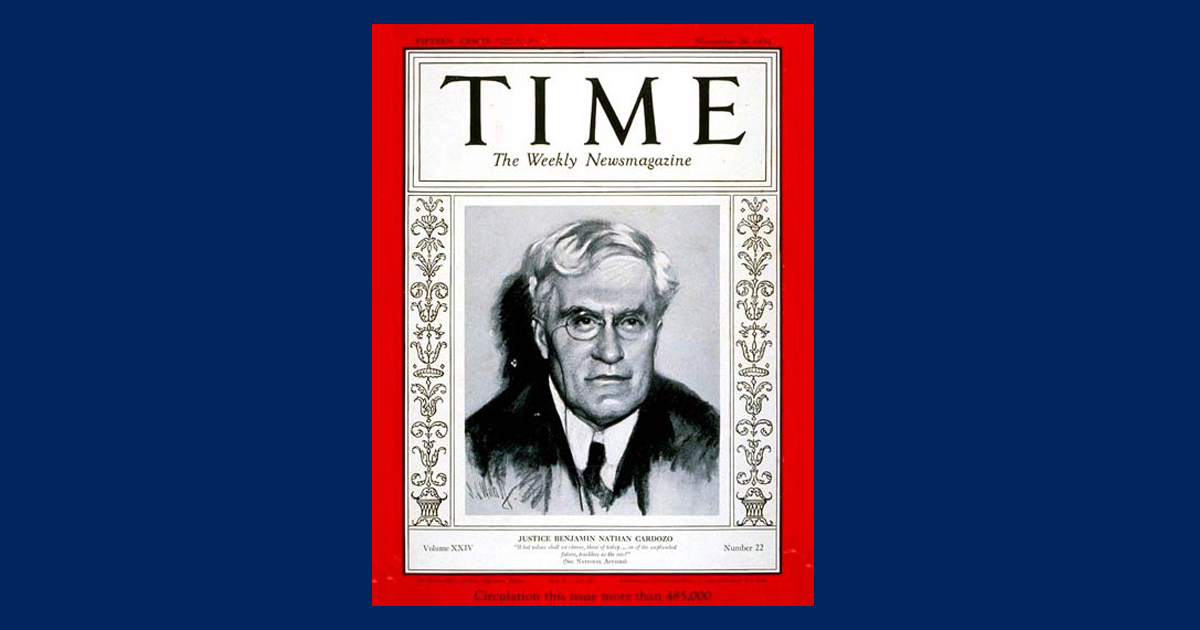 Within the legal profession Cardozo was regarded as the country’s greatest common-law jurist. To the public he was “America’s best-loved judge.” For many years American law school casebooks contained more opinions by Cardozo than any other judge. High schools, a residential college, and a law school bear his name. Because of his reputation for brilliance, New Yorkers use the phrase “He’s no Cardozo” to refer to individuals of lesser ability.

Not bad for someone who supposedly flunked the New York bar exam—maybe several times.

If you Google “cardozo failed the bar exam,” and sift through the entries, you will encounter at least 35 websites, blogs, or posted comments that list Benjamin Cardozo among famous people said to have failed a bar exam. Eight sites say he failed five times; two more say “several” or “multiple” times. Can that be true?

Most of the sites do not cite or link to a source. Of those that do offer a source, four credit Buzzfeed.com, which links indirectly to a 2010 paper by the late Elizabeth Wurtzel published on the Brennan Center for Justice’s website (since taken down). Another five cite Wurtzel’s paper directly.

Wurtzel’s claim? “Both Pete Wilson, the former governor of California, and Antonio Villaraigosa, the current mayor of Los Angeles, took the bar four times; Benjamin Cardozo, one of the greatest justices of the Supreme Court, sat for it six times.”

Two respected blogs quoted Wurtzel’s paper extensively, the Wall Street Journal blog and the Volokh Conspiracy blog. From that point the claim that Cardozo failed the bar exam began to ricochet around the blogosphere.

Wurtzel—a Yale law school grad who actually did flunk the New York bar exam—provided no source for her assertion regarding Cardozo. Since Buzzfeed, the Wall Street Journal, and the Volokh Conspiracy all refer back to her paper, and no website or blog ever made such an assertion before 2010, it seems clear that Wurtzel herself is the original source.

She is not a very credible source. A 2002 New York Times article states, “as in intern at The Dallas Morning News, she was fired for making up quotations.” And The New York Observer in 2006 reported that her memoir Prozac Nation “also faced accusations of fabrications.”

In contradiction to Wurtzel, Harvard law professor Andrew L. Kaufman’s monumental 1998 biography of Cardozo, to which he devoted 40 years, reports as follows: “Cardozo applied for admission to the bar on June 26, 1891, a month after reaching the required age of twenty-one. After he had been ‘duly examined,’ he was admitted as an attorney and counselor-at-law on October 26, 1891.”

If that was not enough, Christine Anne George, a reference librarian at Cardozo Law, tracked down a copy of Cardozo’s bar admission certificate. It confirms Prof. Kaufman’s information, and definitively refutes Wurtzel’s claim. With George’s blog post, the truth is out there. But vigilance will be needed to correct years of re-posted misinformation. To paraphrase Mark Twain, the Cardozo falsehood crisscrossed the Internet before the truth had opened its laptop.

Efforts to correct the record have met with some success. One blog now refers to “conflicting sources” for the claim; another qualifies the claim as “allegedly—there’s still speculation on this one.” ABAforlawstudents.com rejects the claim as a “complete urban legend.”

Every time the bar exam results come out, well-meaning sympathizers attempt to comfort those who failed by posting or tweeting a list of famous bar exam failures. If they include Cardozo, please link them to this post.

Tags: Faculty Experts
Back to Blog