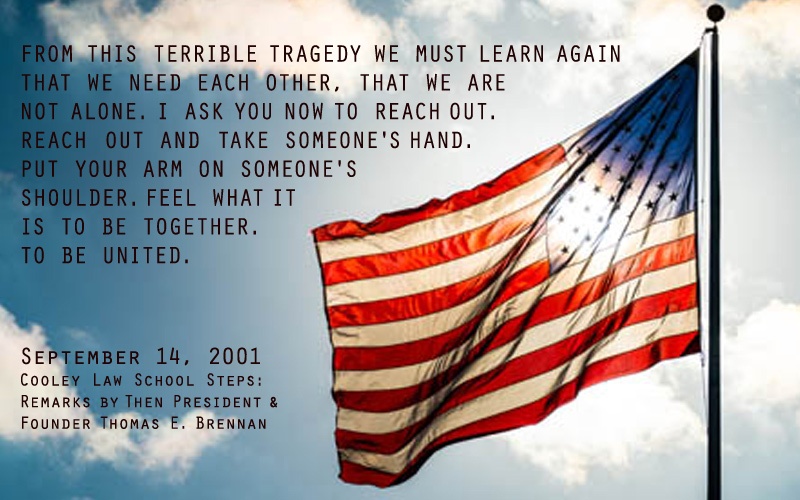 After closing down the law school immediately following the tragic events of September 11, 2001, then-President and Founder Thomas E. Brennan gathered the Cooley community — a family of students and faculty, staff and graduates, family and friends — to share in their heartbreak, fear, disbelief, and grief surrounding the horrific events that happened a few days earlier. Below are Judge Brennan's remarks.

We have gathered here in brilliant sunlight to reflect upon one of the darkest days in the history of mankind.

We have come to share a moment of silent prayer for the thousands of martyred men and women whose lives were ended in awful, ghastly terror, because of the madness of a small band of their fellow human beings.

We have come together because a crime has been committed. Horrendous crime. Crime against people in New York and in Washington.

In the numbing hours and days since last Tuesday morning, our eyes have burned with the sight of living nightmares. Images too horrifying to describe. And too sickening to avoid.

We have heard the recorded voices of dying men and women, tearfully saying goodbye to their loved ones. We have watched people leap in panic from tall buildings. And seen others swallowed up in smoke and dust, as steel and concrete crashed around them and on them.

And we have seen the heroes. Brave policemen and women and firefighters, and just ordinary people, risking, indeed giving, their lives while desperately trying to save others. And we have seen the outpouring of America. the flood tide of compassion that the people of this great nation have unloosed to rescue and to comfort their stricken brothers and sisters to give blood, to open their own veins and hearts so that the blood of a nation may be mingled in the cleansing cauldron of tragedy.

I have already lived three score and twelve through the heartaches of war, the fearsome reality of atoms smashed, the heartbreaking sight of assassination, and the gruesome news of hurricanes, tornadoes, floods, volcanoes and riots. People trapped in mines dying miles beneath the surface of the earth. And others who died in space miles and miles beyond the planet we call earth.

And I have come to know the stark and awesome truth that we human beings are part of a larger existence. We are the work of an omnipotent creator who called us into being for his purposes and to serve his will. The god of all nature has decreed that we are, all of us, a part of his kingdom. We are uniquely alive, uniquely cognizant of living, uniquely free to choose our own destiny. But we are also as much a part of nature as the sun and stars, the land and the sea, the night and the day. And so madness and crime, and sin and violence, will be with us as long as human beings are human. As long as men and women are free to defy the god who made them.

And so we are asked to accept the hurt, the pain, the sorrow. And to find in each other the strength and the warmth, and the courage to go on with our lives. To do what we must do in our own place and our own time. Without fear. Without anxiety. Without surrender to those who would take away our freedom and dominate our lives.

From this terrible tragedy we must learn again that we need each other, that we are not alone. I ask you now to reach out. Reach out and take someone's hand. Put your arm on someone's shoulder. Feel what it is to be together. To be united.

With a single voice we pray: Our father, who art in heaven, hallowed be thy name; Thy kingdom come, Thy will be done, on earth as it is in heaven. Give us this day our daily bread, and forgive us our sins as we forgive those who sin against us. And lead us not into temptation, but deliver us from evil, for thine is the kingdom, and the power, and the glory forever.

This blog was originally posted on September 24, 2013 and is authored by Jim Thelen. At that time,...
Read More