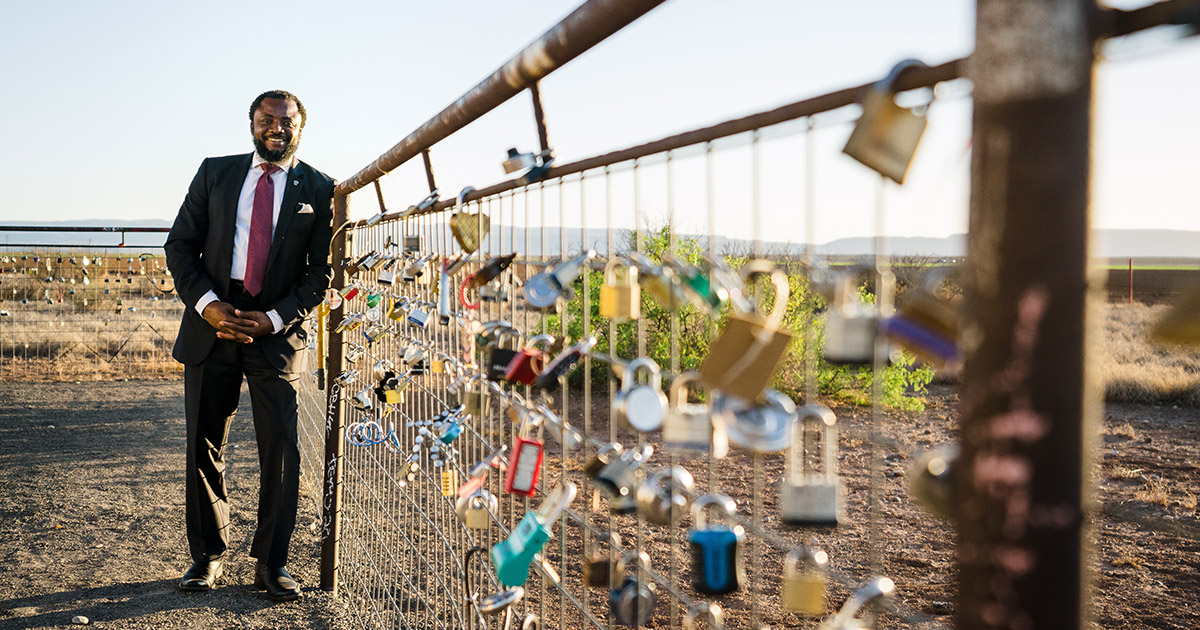 Samuel Onyegam: Doing What He Loves To Do and Making an Impact

Samuel A. Onyegam (Wilkins Class, 2011) would be the first to say he had a good time as a student at WMU-Cooley Law School. But that didn’t mean he was into partying or the bar scene in Lansing, Michigan. He had one priority as a law student. He would make as much out of his law school education and experience as possible, and a good time meant staying focused on “learning the law the right way.”

For Onyegam, “the right way” meant spending most of his time in the law library studying and learning the law.

“I was a known staple in the basement of the WMU-Cooley library,” smiled Onyegam, although “at the time I didn’t fully realize how well such studiousness was preparing me for law practice.”

Onyegam currently serves as an attorney with the U.S. Department of Homeland Security, U.S. Customs and Border Protection (CBP), Office of Chief Counsel. Onyegam is stationed at the CBP Office of Chief Counsel Office in Marfa, Texas at the Big Bend Border Patrol Sector Headquarters. The Big Bend Border Patrol Sector’s area of responsibility spans hundreds of miles along the southwest border.

Onyegam’s practice includes providing advice to, and legal representation of, CBP’s component agencies (US. Border Patrol, Office of Field Operations, and Air and Marine Operations) in matters relating to their activities and functions.

Much of Onyegam’s practice involves constitutional issues such as the scope of border authority, border patrol enforcement operations, search and seizure, freedom of speech, and due process of law. “At its core, my work involves constitutional law,” Onyegam stated. “I swore an oath to support and defend the Constitution of the United States.” Onyegam continued, “I take seriously my obligation to dispatch my duties and responsibilities, consistent with my oath of office.”

DOING WHAT HE ALWAYS WANTED TO DO

Onyegam’s interest in the law started early in life as a youngster growing up in Okehi, a small farming town outside the city of Port Harcourt in Nigeria. In primary school, he would sneak out of class to go to the local magistrate court to watch court proceedings. He was riveted watching and listening to lawyers (barristers) in the courtroom. He was impressed with their ability to engage in and offer commanding and persuasive analysis on wide-ranging subjects and topics, even matters involving subjects and topics outside of the law. 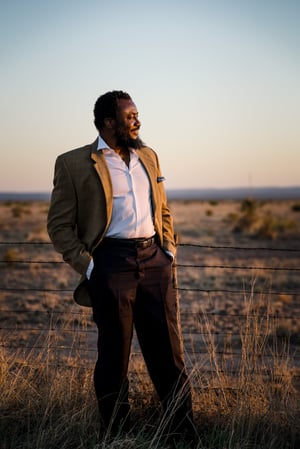 “I enjoyed hanging out by the window of the courtroom and watching the barristers do their thing, and I was fascinated by all that. I got into trouble sneaking out of class to do this, but I was not deterred.”

While attending a Catholic seminary school, Onyegam came across two books, Plato’s The Trial and Death of Socrates and Aristotle’s Politics and Poetics, in the bookstore of the Catholic Institute of West Africa, which was adjacent to his secondary school. After reading these books countless times, “I was mesmerized by Plato’s dialogic style and by Aristotle’s Politics and Poetics. I became even more determined to pursue a profession involving the use of words as tools of trade, and persuasion, much like the carpenter uses the tool in his toolbox to craft fine furniture. When I speak with friends today, those who knew me growing up, they say they are not surprised I became a lawyer. They say, ‘No surprise, you are doing what you always wanted to do,” smiled Onyegam.

After secondary school, Onyegam came to the United States. He knew his path to law school might not be smooth and easy. He imagined he would not have as many options regarding his law school choice. He knew he would have to work hard.

After receiving his bachelor’s degree in Political Science, Onyegam received his master’s degree in Liberal Studies with a focus on International Relations/U.S. Foreign Policy and a special emphasis on the Behavior and Rhetorics of Emerging Hegemonic Powers.

Onyegam applied to WMU-Cooley Law School based on various factors, including the diversity of the student body, the rolling admission program, and the option to start law school in January, May, or September. According to Onyegam, “WMU-Cooley Law School was the right fit for me.” In fact, as Onyegam likes to say, WMU-Cooley chose him, and gave him a chance. And he’s never looked back.

In January 2009, Onyegam packed up and drove from Allen, Texas, to Lansing, Michigan, to start his law school journey with WMU-Cooley Law School.

The first couple of terms in law school were like learning a new way of thinking, according to Onyegam. There were challenges in the beginning, which was hard to take for someone who was used to getting top grades.

“I recall going straight home one day after finding out I didn’t do well on my first Contracts test. That was it, I told myself that would never happen again, and I needed to figure out how to clear this up. From that day on my grades improved dramatically. I went on to appear multiple times on the Dean’s and Honors lists, received multiple Honors Scholarships, and received a Certificate of Merit for outstanding scholarship in international law.”

Onyegam became laser focused. He joined a study group. As he settled into law school over the next terms, he discovered he had more opportunities to mentor and coach newer law students who, like him, were exploring ways to develop and refine the organizational and management skills necessary to adjust to the law school environment. One student appreciated his engagement and mentoring so much that the student’s parents presented Onyegam a special gift as a thank you.

PUBLIC SERVICE HAS BEEN FULFILLING AND REWARDING

Helping others through public service is at the core of who Onyegam is as a person. The work that energizes him the most is using his knowledge and skills to make an impact on people in real ways.

It was a very brief conversation he had with a WMU-Cooley professor of international law that turned his attention to the possibility of working for a government agency. That fleeting suggestion sat in the back of his mind through his externship with the Dallas County Public Defender’s Office and graduation from WMU-Cooley. After Onyegam was licensed as a Texas attorney in May 2012, he took the first steps towards a career in public service.

In line with his interest in international law and foreign affairs, Onyegam first explored a career as a Foreign Service Officer with the U.S. Department of State by taking the Foreign Service Officer exam. After taking another public service exam, Onyegam was contacted by the U.S. Department of Homeland Security, U.S. Citizenship and Immigration Services (USCIS). After a lengthy process he accepted a position as an Immigration Services Officer. Onyegam adjudicated and made final decisions on various immigration petitions and applications. In accepting the position, Onyegam received approval to also operate his private law firm. In May 2012, the same month he started his position, Onyegam opened his law office in Dallas, Texas where he represented clients in a variety of civil and criminal cases.

After seven years with USCIS, Onyegam explored opportunities to broaden his expertise in U.S. immigration law, but he also wanted to remain with the U.S. Department of Homeland Security. With his expertise in interpreting and applying U.S. immigration law, procedures, and policies in the adjudications environment, Onyegam wanted to gain experience and expertise in immigration enforcement. This led Onyegam to accept his current position with the U.S. Department of Homeland Security, U.S. Customs and Border Protection, Office of Chief Counsel where a major aspect of this practice involves advising the government on a wide range of immigration enforcement issues.

“The reason I am passionate about my work is that I provide advice to the U.S. government that helps to advance the Department of Homeland Security mission of enforcing our immigration laws and safeguarding our homeland. In addition to advising the government on immigration enforcement, my work also involves wide-ranging legal issues including those relating to combating terrorism, human trafficking, narcotics and arms smuggling, international trade, intellectual property rights, and agricultural violations. This work is part of a bigger goal and purpose, which is to advance the U.S. Department of Homeland Security mission of safeguarding our homeland.”

“Contributing to advancing the mission of safeguarding our homeland is a potent source of pride and fulfillment for me. Like millions of Americans, my immigrant history provides a wider lens through which I see various issues. It not only adds a broader understanding of, and an appreciation and tolerance for issues relating to my position as a government lawyer, it informs my approach to issues involving diversity, inclusion, engagement, and collaboration.”

As much as Onyegam feels his life’s struggle and successes are not that different from many others, he does feel that the trajectory of his professional career and his position as a government lawyer presents unique obligations and responsibilities.

“While I aspired to become a lawyer, I did not imagine that I would be a lawyer advising and representing the United States government. But I feel uniquely privileged to serve in the role that I do today.” 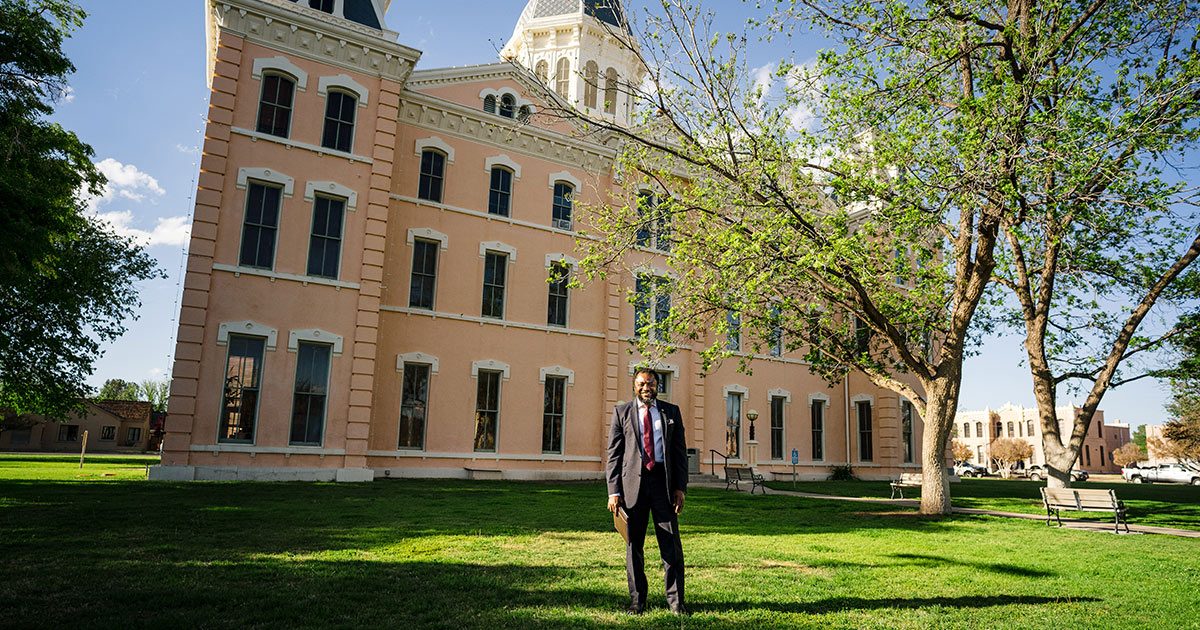 PROTECT AND DEFEND THE CONSTITUTION

“Among the very first things I internalized as a public servant is that I took an oath to support and defend the Constitution of the United States against all enemies, foreign and domestic. I perform the duties of my position as a government lawyer consistent with this oath.”

For Onyegam, his responsibility is to provide legal advice to the government based on an objective and fair interpretation of the laws and consistent with currently applicable policies.

Onyegam knows his job may not be for everybody but believes it offers an excellent opportunity for those who may be interested in public service while building a solid, dynamic and rewarding legal career.

Looking ahead, Onyegam anticipates remaining in public service with the Department of Homeland Security. He feels fulfilled in his work, but he also aspires and could visualize himself serving in the future as an adjudicatory decision-maker at the level of an immigration judge.

“I know some people who became immigration judges after many years as government lawyers."

One of them is a close friend and mentor. He believes the vast experience and expertise gained as a government immigration lawyer would be a great asset on the bench. Onyegam also can see himself as a law professor, teaching courses in international law, immigration, national security, and other areas within his expertise.

"These aspirations keep me grounded and focused on maintaining a high work ethic, being persistent and resilient, and always working hard."

Onyegam engages in a variety of hobbies to maintain his physical and mental health. He has a regular exercise routine and enjoys being outdoors, especially hiking the mountains of the Big Bend region of Texas.

“One of my favorite places to hike is the Vail Valley region of Colorado, a truly scenic and beautiful place. In normal times, I make two annual trips to Colorado, a summer trip and a winter trip.”

“I take two to three weeks off and just get on the road to explore and soak in some of the truly beautiful and mesmerizing landscapes in our beautiful country. I have done road trips across 44 states, and I am looking forward to my road trips through Alaska and Hawaii.”

“Having also traveling widely internationally, I believe that the United States is the most beautiful and the greatest country on the face of our planet. No other country comes even close.”

“Road trips allow me to really get to know and enjoy our great country - America the beautiful. It is also an excellent avenue to decompress and rejuvenate."

DISCLAIMER: This article is a personal account of Attorney Onyegam’s life and experience in public service. The article does not reflect any official position and/or statements from the U.S. Department of Homeland Security, U.S. Customs and Border Protection or the Office of Chief Counsel.