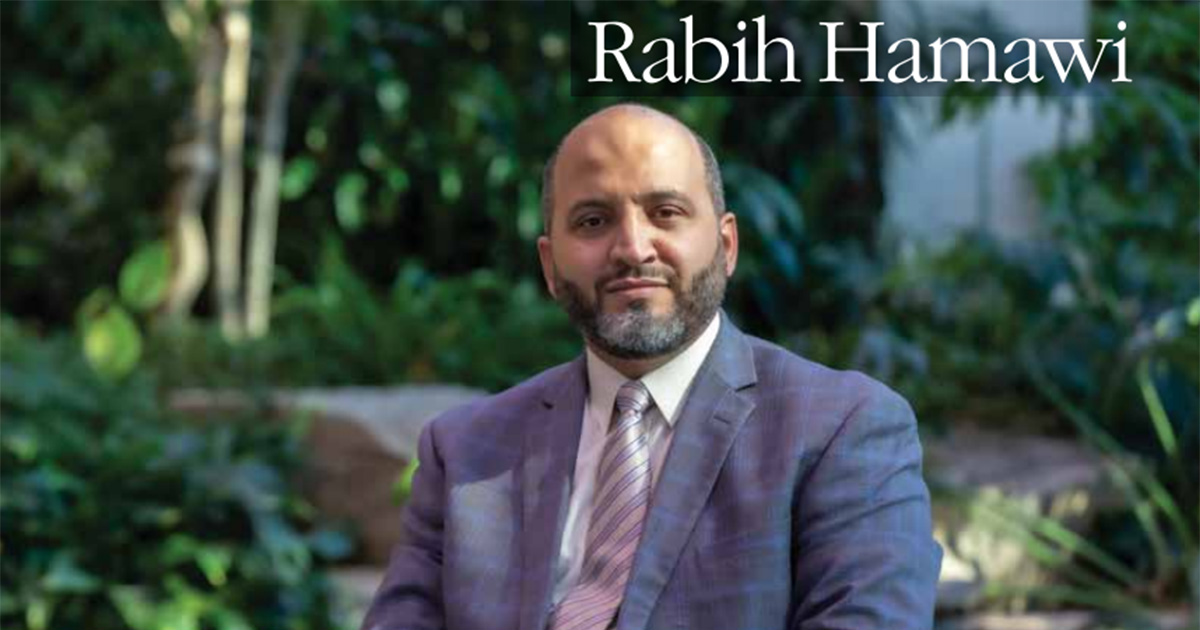 Sometimes seminal moments in one’s life can change a career path. For Rabih Hamawi (Story Class, 2015), who at the time, owned and operated an insurance agency in Livonia, Michigan, it was a not-so-ironic realization that led him to now battle in court against insurance companies on behalf of his clients.

“There are trigger moments in your life that kind of open your eyes,” Hamawi said. “During my days in the insurance agency, I had seen many, many times when policyholders who should have rightfully collected on a claim and the insurance company would either delay the payment or not make a payment at all. I saw insurance companies shortchanging the policyholder. So, when I opened my law firm, my mission statement was to advocate for the less fortunate in that relationship – the policyholder.”

PRACTICING IN THE UNITED STATES

Hamawi who emigrated from Beirut, Lebanon, is member of one of the largest Arabic communities in the United States. In Lebanon, he earned a LL.B., Bachelor of Laws and had begun the process of completing all required steps to practice as an attorney in his native land. But, when he decided to practice law in the United States, he didn’t want to leverage his LL.B. and earn an LL.M., but rather he sought a J.D. degree, and WMU-Cooley Law School seemed to be the ideal fit for that ambition.

“Cooley was closest to me, and I was working full time supporting my parents and three siblings, whom I brought here in 2005, and Cooley’s class schedule was very flexible,” Hamawi said. “Cooley also offered students more hands-on experiences than what other law schools could provide. It was the right size where I would get the one-on-one attention I wanted and structured so I could achieve the degree I wanted.

“Of course, like anything, at the end of the day, you get what you put into your education; but I really can’t count all of the positive experiences that Cooley provided me. Cooley also had the best professors. In my opinion, it is the best law school in Michigan,” he said.

Following law school, Hamawi knew he wanted to build a practice that would help those who have little or no means to navigate through the legal system.

“I wanted to create this niche practice where I could help others,” he said. “Sometimes I might be defending someone who doesn’t understand the system and an insurance company is making them an offer they hope they might take. I wanted to open a firm that will fight exclusively for those who have lost their homes, businesses, and their most precious personal items due to disasters, and who now must persevere against an insurance company to get their lives back together,” says Hamawi.

And Hamawi’s multi-language and diverse background is a major asset for his clients. “That’s why I wanted my firm to give special attention to the needs of the several minorities in Metro Detroit, and Michigan, who sometimes are victimized by insurance companies due to race, ethnicity, religion, or inexperience with the judicial system,” says Hamawi.

“One of the advantages I have personally is my background,” he said. “My first language was Arabic, but more importantly, I understand all of the dialects of the Arabic language. I can’t tell you how many times I have encountered misunderstandings or misinterpretations during depositions and court proceedings. I have witnessed court-appointed interpreters who even misinterpret what the client is saying because they don’t know the particular dialect. The court interpreter might wrongly translate what a client is trying to say... when I encounter that, I stop the whole proceeding until they get it right.”

Today, Hamawi ranks as one of the top insurance lawyers in the state. He has been named to the Michigan Super Lawyers Rising Stars list in insurance law in 2017, 2018, 2019, 2020, and 2021, an exclusive list, recognizing no more than 2.5 percent of exceptional young attorneys in Michigan who have demonstrated excellence in their areas of expertise. Hamawi was also selected to the Michigan Lawyers Weekly Class of 2020 Up & Coming Lawyers, which is dedicated to saluting Michigan lawyers who have established a name for themselves by displaying the ambition, drive and accomplishments that set them apart among their peers — in their first 10 years in practice. He is the current Chair-Elect of the Insurance and Indemnity Law Section of the State Bar of Michigan and serves on the executive board of the Michigan Association for Justice.

Hamawi and his wife, Amy, live in Dearborn, Michigan.

Legal Risk Management for Lawyers: Learn How to Protect Yourself

Tips for How to Get Cheap Car Insurance