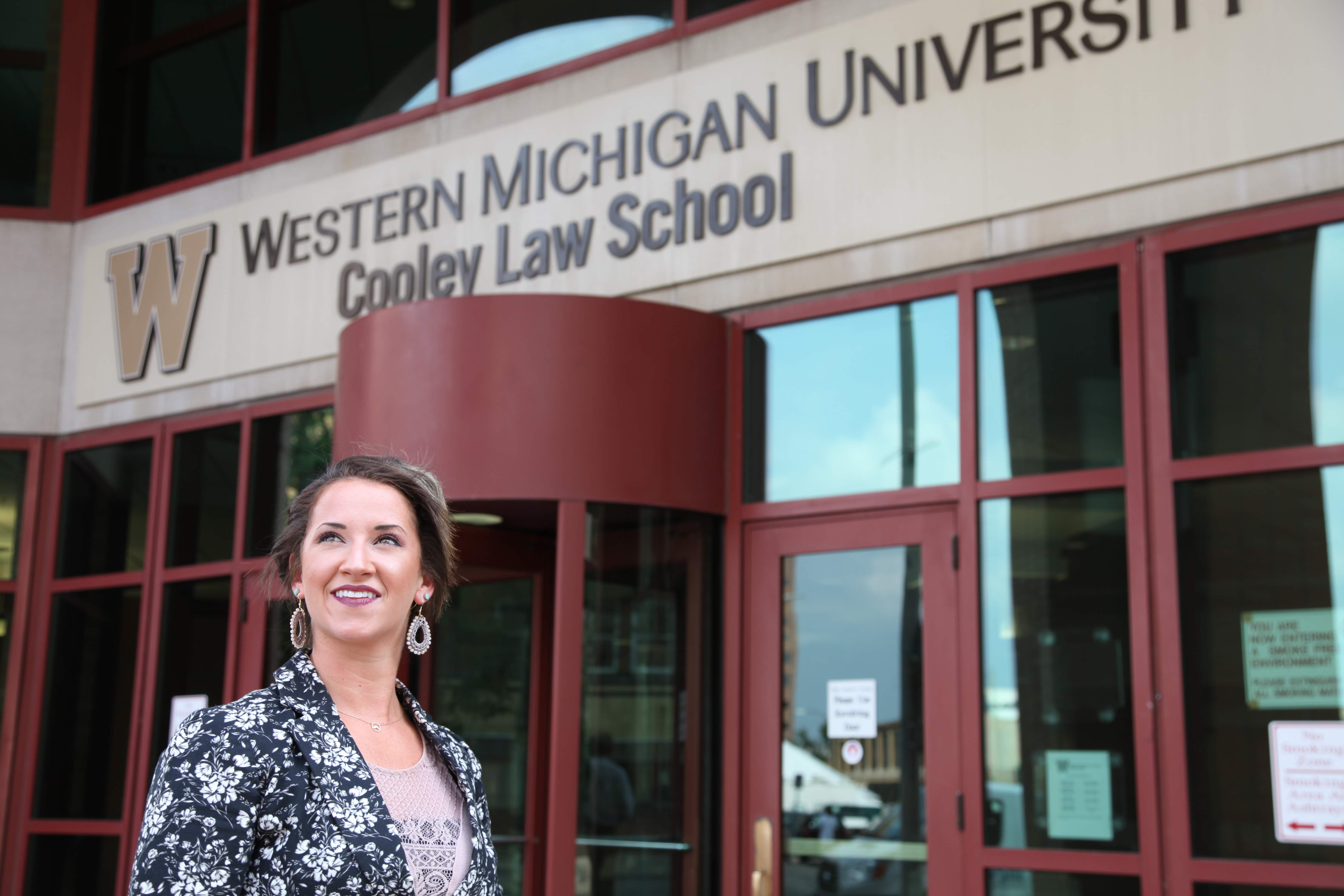 You can do anything; it all comes down to what you want

To say Victoria McCormick is dedicated to her country, her legal studies, and to service is to state the obvious. Not only did she work as a JAG Corps Paralegal Specialist for the Michigan Army National Guard, she worked as a paralegal for the Loomis Law Firm and WMU-Cooley's Innocence Project, all while attending law school at WMU-Cooley's Lansing campus.

But looking back, going to law school wasn't even on the radar when she was considering careers and planning her life. It just happened. And it changed her life.

Everything happens for a reason

For McCormick, she learned the hard way back in college that the best laid plans have a way of going off course. While working with Army ROTC and earning her degree in criminal justice and military science, she found out that her father had terminal cancer. McCormick dropped everything, including her plan to commission after graduation. 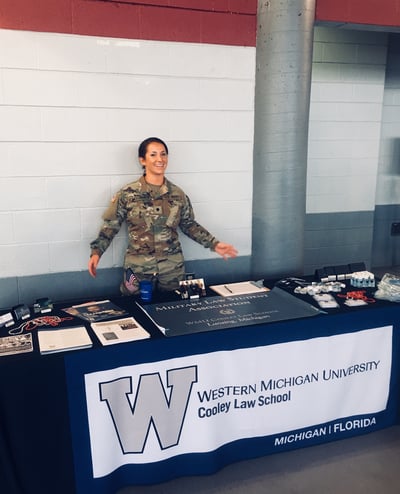 "I remember it was during finals week of my junior year of college," recalled McCormick. "I got a phone call, and was told that my dad had terminal brain cancer and only had 3-4 months to live, if we were lucky, and if he made it through the surgery."

Distraught, McCormick flew out that very day with a family friend to her home on Martha's Vineyard. She got to spend the summer with him before he passed, but she "wouldn’t have done it any other way."

Trying to pick herself back up, McCormick knew that she still had much she wanted to accomplish in her life. She knew that she loved her work with the military and felt like she belonged. That part of her life was right.

"There are so many great benefits in the army, including financial funding," stated McCormick. "I believe that all of my military experiences will be very useful to me, in my career and as a woman. Regardless of where you go in life or what you want to do, a military background imparts invaluable skills that you can take with you anywhere."

Those invaluable military skills, and a chance phone call from a friend about an opening in JAG, gave McCormick exactly what she needed to set her career back on track - not only in the military, but in the law.

"It's a funny story," laughed McCormick." I always knew that I enjoyed my legal concentration classes in undergrad, but it wasn't until I received a random phone call from my friend in another unit about a JAG slot opening, that I knew this was meant to be, and that I should go for it! I went the very next day to MEPS (Military Entrance Processing Station), got the slot, and shipped out to basic training. Then I went through the JAG Paralegal school."

Going through training and fitting in taking the LSAT and applying to law school was an altogether other story.

"I have to be honest, I didn't even know WMU-Cooley was a law school," smiled McCormick, "but I got a job at the Loomis Law Firm in the Boji Tower in downtown Lansing, and I worked for some great attorneys who had great things to say about WMU-Cooley. I also met Judge Rosemarie Aquilina, who was the first female JAG for the Michigan Army National Guard and a Cooley grad. What an inspiration. I then met General McDaniel, the dean at WMU-Cooley's Lansing campus. 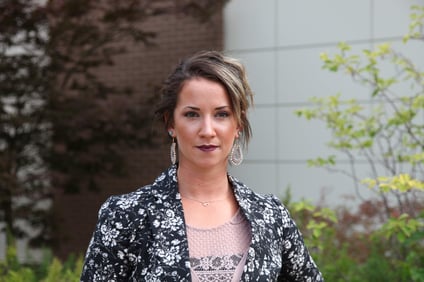 "I couldn’t have asked for anything better," declared McCormick about her decision to attend WMU-Cooley. "There's not another law school that would have fit me better, especially as a military service member in the army, with drill weekends."

Even though trying to fit everything in hasn't been easy, McCormick feels it is all possible.

"It's tough, very tough," stated McCormick. "It takes up a lot of your time. You’re constantly having to work your studies around your annual training and your drill weekends, but it’s doable, and I’m a perfect example of that!"

McCormick is trying to keep her goals in check and plans in place. She would like to direct commission once she graduates with her J.D. and passes the bar. She also would like to do WMU-Cooley's Homeland and National Security LL.M. Program. Her ultimate goal is to apply for an active duty JAG slot. She knows it's competitive, but she's up for the challenge. That being said, she has many legal interests.

"I may be different than most law students," said McCormick. "I’m not really into litigation. I would rather do operations law or counter terrorism, or work with the Department of Justice or Department of Defense, or work abroad on international legislation as it relates to counter terrorism. I am excited about all the possibilities." 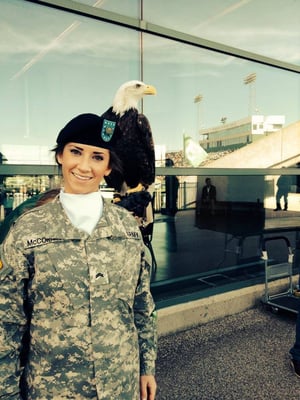 Despite her efforts to stick to her plans, McCormick was presented another opportunity in August that will have her setting aside law school for a year to serve her country. She deployed to an unspecified location in September 2018, and will return to law school September 2019.

"It's been a little crazy," smiled McCormick. "But everything has seemed to blend together. Learning about the law has been empowering. I love all of it. Laws are essentially what runs the world. Laws have power, and you need to know those laws to truly influence legislation and laws.

At 24, McCormick's career and life feel like someone a lot older, but don't mistake her youth for not being serious and committed.

Nothing is impossible says McCormick. "Even if you think something is unbearable, you can do it if you have the desire. It doesn't matter to me. If you tell me something’s impossible for 'my age' or for 'being a woman' or for anything, I will prove you wrong. So, that’s my thing.

"You just have to prioritize, organize, stay proficient, stay proactive, stay on top of things, and pay attention. It all comes down to what you want most and what your goals are. You just have to set the plan, stay on track, and figure out how to do it. Just do it. That’s kind of what I’ve done. It's a little crazy, but I'm pretty sure it's a good thing."

WMU-Cooley Law School, as a military friendly and designated Yellow Ribbon School, talks to its military students, faculty and graduates about their journey from the military to law school and about their career goals. WMU-Cooley features law student Victoria McCormick, who is a third-term law student and a JAG Corps Paralegal Specialist for the 177th Military Police Brigade Headquarters unit for the Michigan Army National Guard. She recently deployed to an OPSEC classified location in September 2018 and returns to the United States July 2019, at which time she will return to her legal studies at WMU-Cooley. Read the Detroit Legal News story on Victoria here.