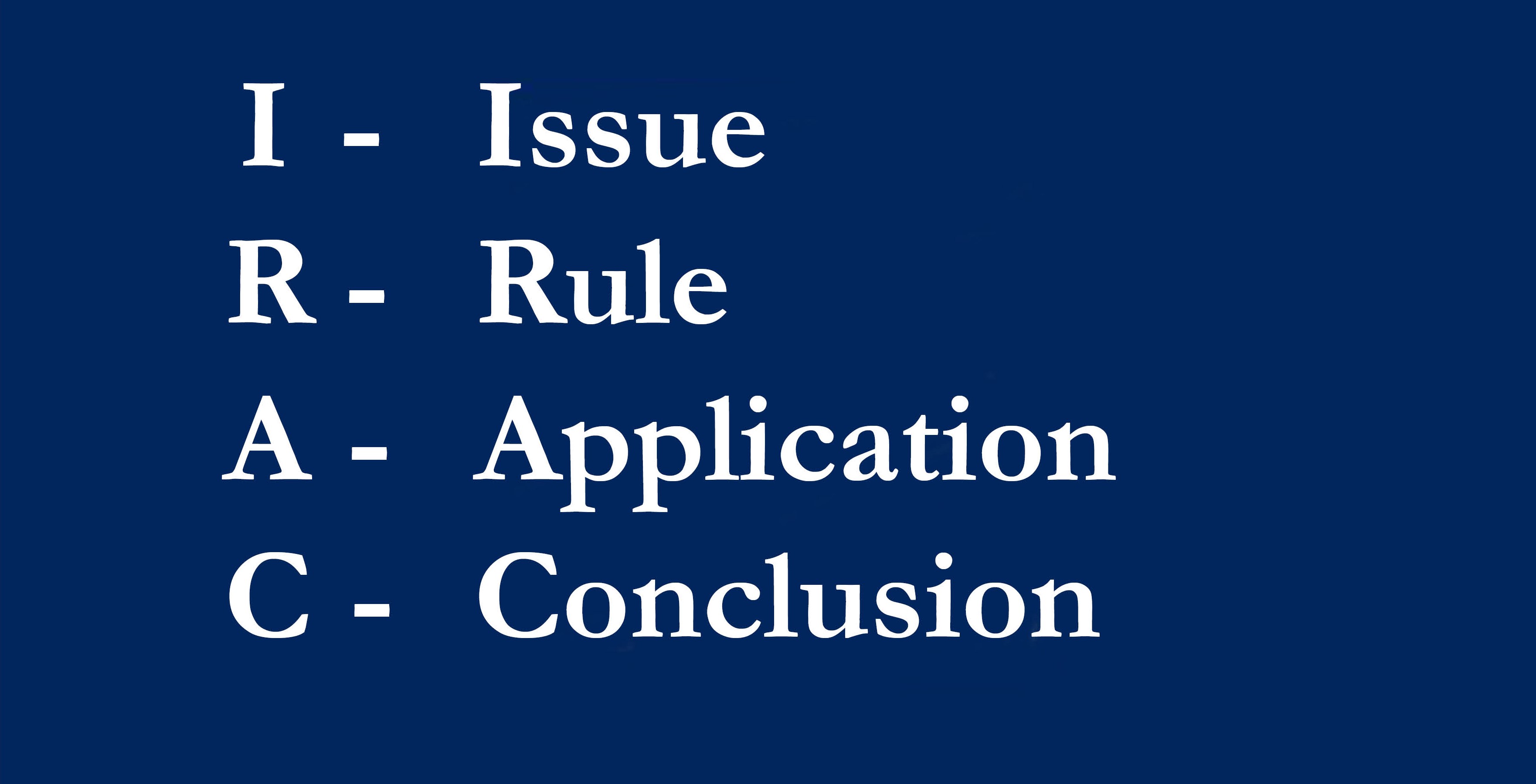 It's All About IRAC

As beginning law students soon learn, what we call “legal reasoning” can be expressed by the formula IRAC. It’s the law’s version of the deductive syllogism. It stands for Issue, Rule, Application, and Conclusion. First, identify the salient issue (“Is Socrates mortal?”). Then, state the applicable rule (“All men are mortal”). Next, apply the rule to the relevant facts (“Socrates is a man”). This leads inexorably to the conclusion (“Therefore Socrates is mortal”).

IRAC is what “thinking like a lawyer” is all about. It is the format used by lawyers in preparing legal memoranda. And the structure that most judges use in drafting judicial opinions. It’s also the type of analysis that law professors—and importantly, bar examiners—are looking for.

THE IMPORTANCE OF IRAC

IRAC is as central to legal analysis as the formula E=mc2 is to physics. Over three decades ago, University of Texas law professor, and leading authority on legal writing, Terri LeClercq called IRAC “the golden-rule acronym for organized legal discussions” (Texas Bar Journal, February 1987). A recent Michigan Bar Journal article by Michigan State University law professor Stephanie LaRose affirms that despite some critics, “variants of the IRAC method continue to be the gold standard in legal memorandum and brief writing” (Michigan Bar Journal, November 2018). Go for the gold! (Wikipedia lists 20-plus variants.)

Our own legal-writing guru, Distinguished Professor Emeritus Joe Kimble, has endorsed IRAC as well (The Second Draft, November 1995). As has Nelson Miller, WMU-Cooley Associate Dean Emeritus and Professor. His book Preparing for the Bar Exam (2015) says point blank, "IRAC is king here as elsewhere." A 2003 University of Detroit Mercy Law Review article by Jeffrey Metzler, “The Importance of IRAC and Legal Writing,” rightly concludes: “IRAC is the key to success on law school exams, the bar exam, and a successful career in litigation.”

Any doubt that IRAC is key to bar-exam essay-writing success is resolved by the Michigan Board of Law Examiners Rule 3(B). It explains that a high-scoring answer “demonstrates a full understanding of the facts, a complete recognition of the issues presented and the applicable principles of law, and an excellent ability to reason to a conclusion.” Sounds like IRAC, doesn’t it? (There is no F in IRAC, but the A requires applying the rule to the relevant facts.)

Even more direct is this passage from a 2005 article in The Bar Examiner, published by the National Conference of Bar Examiners: "A candidate must demonstrate mastery of the fundamentals of IRAC (the Issue-Rule-Application-Conclusion structure of legal analysis) . . ." Notorious for introducing multiple-choice testing on the bar exam, the NCBE also supplies essay questions to all but a handful of jurisdictions. They know what they’re looking for. (In 2022, Michigan will begin using NCBE essay questions.)

WHERE DID IRAC ORIGINATE?

One researcher has declared, “Though many scholars reference IRAC in legal writing literature, there is no clear record of its genesis and underlying principles.” The earliest reference to IRAC found in a search of legal literature dates to 1961 (Student Lawyer Journal, October 1961).

One origin story is that IRAC was devised by the United States Army as a means of teaching a sudden mass of raw recruits, drafted to fight in World War II, how to problem-solve on the battlefield.

This much is true: IRAC helped Michael Josephson, then a young Wayne State University law professor, create a bar-review powerhouse. In the early 1960s, only one bar-review course was available in Michigan: Melvin Nord’s Bar Review. “Dr. Nord” himself lectured on every topic. But although the Michigan bar exam was all-essay back then, Nord’s course didn’t spend much time on essay writing.

In 1969 Professor Josephson started a competing bar-review course with two compelling differences: he engaged seasoned law professors to do the lectures and he emphasized IRAC-based essay writing. (Legal Research & Writing had been his first teaching gig.)

Within a few years Josephson’s Bar Review Center (BRC) was dominant in Michigan. In 1973 Josephson moved to Los Angles and took on the growing California bar-review market. By 1980 BRC was enrolling 14,000 students in 14 states, with annual sales of $4 million. He sold the company in 1985 for $10 million.

So listen up, students: IRAC may have helped us win World War II, it made Mike Josephson a multi-millionaire, and it can work for you. CALI (Computer-Assisted Legal Instruction) offers a helpful online tutorial that can coach you through each element. Set aside 45 minutes to complete it.

Then practice with old exam questions until using the IRAC framework becomes second nature. Too many students start answering with IRAC, then as pressure builds they lapse into a stream-of-consciousness outline dump.

Here is an IRAC template I have shared with my first-year students. It incorporates certain “trigger” words (in italics), as explained below:

And, add where appropriate:

The italicized words are well-established terms that lawyers use to introduce issues, rules, facts, conclusions, and alternatives. Use them as signposts to help the grader follow your analysis. (Some commentators oppose beginning issue-statements with whether. But it’s the practice followed by the U.S. Solicitor General’s Office. That’s good enough for you and me.)

GIVE ME AN O

On the other hand is a useful “flipper.” As with a pinball machine, it serves to redirect the silver ball upward so it can score additional points. Use it wherever there is more than one rule (the “Williston rule” vs. the “Corbin rule” on parol evidence might be an example, if your Contracts prof covered both).

Or maybe the facts are ambiguous enough—by design or carelessness—to admit of more than one reasonable interpretation. If so, explore both. Rather than ignoring alternative rules or ducking conflicting facts, rejoice when the opportunity is presented to leverage them to score extra points.

Recall the joke, “I need to find a one-armed lawyer . . . I’m tired of them saying ‘On the one hand’ and then ‘On the other hand.’” Well, it’s no joke—it’s what we lawyers do: turn the question over, look at both sides. When writing exam answers, act like a lawyer. I have often seen students leave points behind by failing to explore all reasonable alternatives. For that reason, I have created my own variant by adding an O for On the other hand.

Go for the gold. Win the war. Use both hands. Achieve essay excellence with IRAC-O.

Otto Stockmeyer is a Distinguished Professor Emeritus at WMU-Cooley Law School. Although retired from classroom teaching, he maintains an active interest in helping students succeed. He appreciates the help of Rita Marsala, Head of Public Services at WMU-Cooley’s Brennan Library.