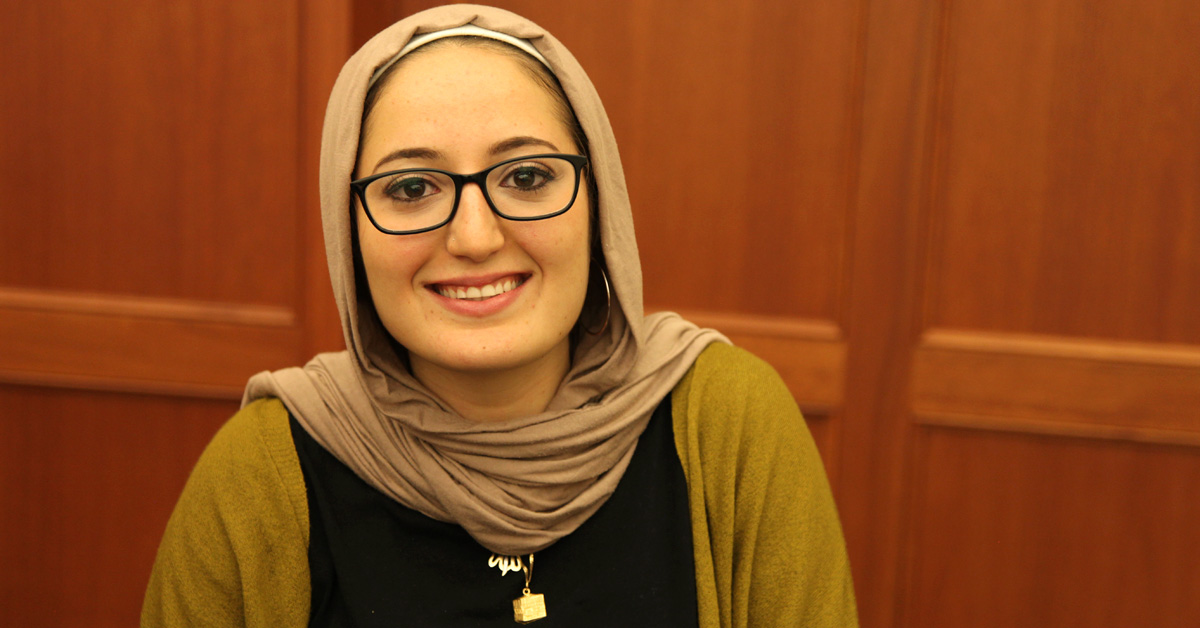 Hala Alkattan: If you are really paying attention, you can't NOT care

Even while WMU-Cooley student Hala Alkattan was working on her undergraduate degree, she knew she wanted to help people. At the time she wanted to do something for the Syrian refugees that were coming into Tampa. Little things to make life better for them. From that spark of an idea, the small non-profit, "turned into something huge," as Alkattan says.

"We started out just trying to help in simple ways," explained Alkattan. "We helped with translating for the refuges in the community. We took them to their appointments and hold a hygiene products drive. We were getting involved in ways we knew would help. That's when I realized how much I wanted helping to be a part of what I do everyday."

She also surmised that she would be able to do that much more with a law degree.

It didn't take long for her to take the LSAT, the get accepted to WMU-Cooley Law School. Yet being a busy law student didn't slow her down from getting involved in service to others.

That first summer in law school, Alkattan managed to fit two internships into her schedule; one with a local judge she admired, the other overseas, in the Arab country of Jordan.

"I absolutely loved being involved and exploring all my options," shared Alkattan. "Plus, I love meeting people. My first judicial internship was fantastic. I got to sit in on trials and see how the state does their job. I got to see how prosecutors and defense attorneys did their job. It became very real to me.

"My legal internship working with refugees in Jordan with IRAP (International Refugees Assistance Project) was absolutely amazing in so many ways. I was working with refugees from Syria, Sudan, and Iraq. Not only was I able to help them with their legal concerns, I got to know and advocate for them on behalf of the U.S. government. We talked about what they needed to do in resettlement, and helped them with their protection or medical needs. It was really hands on."

Alkattan went on to explain how she and other law students from across the country spent their summer. It was an invaluable experience for all. "Just meeting with families and hearing their stories really motivated me to do everything in my power to give them the help they needed. It was a life-changing experience."

Although Alkattan knew some Arabic, all the interns were given translators to assist them in doing their work.

"It's funny," smiled Alkattan. "I was put with a translator only because I was born and raised in the United States. I knew Arabic though. It is my second language. I wanted to use my Arabic so I pushed myself. I figured I would get a better grasp and strengthen my use of the language. My supervisor assigned me a translator at first, then would test me after six interviews to see if I was fine on my own. I worked hard to learn those legal terms and the dialects, and did pretty well. I was able to finish my internship doing the interviews on my own."

The experience was so meaningful to her and her colleagues. They all learned how to conduct intake interviews with refugees to determine needs and refugee claims, draft intake reports as part of IRAP’s case screening process, draft legal briefs and memos in support of at-risk and vulnerable refugee cases submitted to the U.S. government or the United Nations High Commissioner for Refugees (UNHCR), prepare affidavits and other evidence to reinforce claims, research refugee law or human rights country conditions, and research refugee sponsorship and related programs as part of IRAP’s Alternative Pathways work. 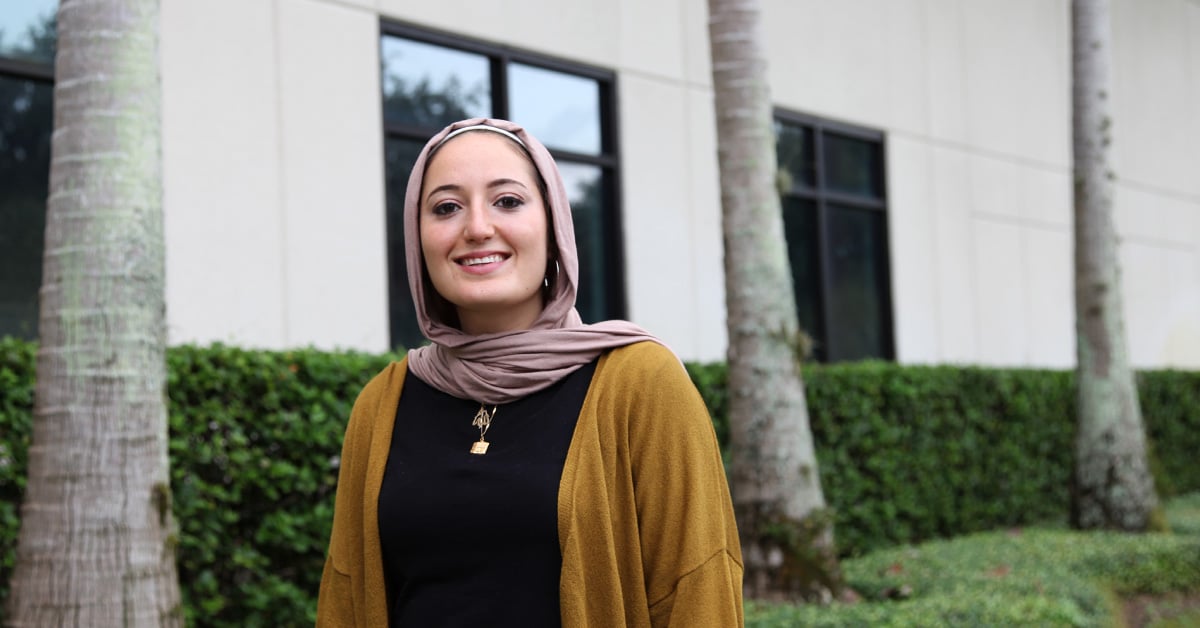 get educated. give back.

Alkattan was born in Indiana, but her family came from Syria. Her father immigrated to the United States when he was 18 years old. Like so many immigrants, he was escaping his home country to find opportunity and a better life. Getting educated and giving back to community was instilled as values growing up. 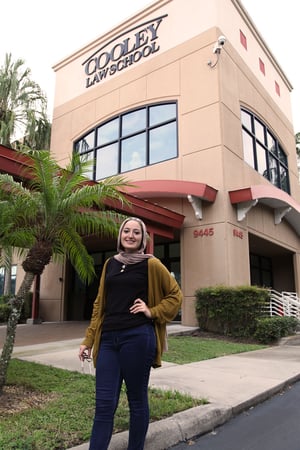 "When the crisis in Syria started, I remember our family going back to visit our extended family over the summers," told Alkattan. "It was during those visits with my grandparents and cousins that I picked up the language. But I found it strange though, because I grew up in the United States. Seeing how different our cultures were really opened my eyes. It made me feel so blessed to be an American. We are given so many opportunities and rights that my Syrian family did not."

Alkattan was in high school when things in Syria were getting very bad. She became acutely aware of the incongruity around the world. But it was when Alkattan saw first-hand how her family was directly affected by the crisis that her focus became fine tuned.

"The way I decided to do something about this injustice was by showing people who I am as a person through giving back and being involved," said Alkattan. "Growing up as a Muslim, I struggled with being accepted by my peers," said Alkattan. "It was difficult in the beginning, but I think it has made me a stronger person. As I grew older I would tell people, 'This is who I am; this is my right,' and I saw how there were those who were really nice and accepted me, and then there were those who weren’t as accepting. But that is the beauty of this country - everyone has their own opinion and everyone is entitled to it. I think an engaged Muslim community can help show others we are good people, not just this faction of radicals they see in the media.

"I believe everyone can help by reflecting on why you are feeling very strongly towards a certain culture or a religion. If we can put ourselves in someone's place to try to understand each other, the better life will be for everyone. In the end, we are all just people who have their own beliefs, understandings and passions about certain things."

After 20 years of living in Indiana, the family decided enough of the cold and moved to Tampa, Florida. Alkattan decided to finish her last two years of undergrad at the University of South Florida. That was in 2015, and the crisis in Syria was getting very bad.

"I remember there was a chemical weapon massacre and this huge influx of refugees to our country," recalled Alkattan. "I would always hear about it in the news. It was a hot topic, and I was paying attention and really frustrated. I knew I needed to get involved, in any way. I ended up talking to someone about how to start an organization for Syrian refugees. They told me that was something I could do, and I could even be president since I was so intimately involved."

That did it. Alkattan took on the role with gusto, despite not knowing exactly where she wanted to go with the organization. She wanted to spread awareness of the crisis and the injustice, but it it was the call from a local church in Tampa that defined her purpose and direction. They had heard about her organization and they needed translators bad.

Alkattan immediately wanted to help. She even skipped class to go meet with one of the families. She remembers falling in love with this beautiful family (also featured on Humans of New York). They ended up in Tampa through the assistance of the United Nations, but they needed help in every way. They only had a certain amount of allocated money and needed basic necessities, along with guidance and assistance in finding work. They also need to see a doctor.

"I will never forget this family. It was the start of something that grew into something beautiful. Other organizations would reach out to me to help out in our efforts. All these people wanted to get involved. They even started tutoring programs for the refugees in the Tampa Bay community. The program is still ongoing, and I still keep up with it. As a law student, I've had to hold off a bit, but I definitely want to do more, here in our local community, or anywhere life takes me. I think the opportunity are endless, but I will always want to be involved, meet new people and try new things."