Graduation Speaker Believes in Miracles and Divine Perfection of the Universe

This blog was originally posted September 22, 2015.

Catherine Groll is a litigation attorney at Willingham Cote. She has practiced as a litigator for 24 years and taught at WMU-Cooley as an adjunct professor for 12 years, receiving the Frederick J. Griffith III Adjunct Faculty Award for excellence in teaching in 2010. She was the commencement speaker for our Lansing campus in 2015. 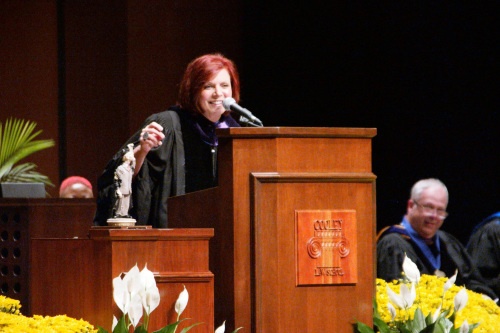 “If that completely scares you, or you are just totally not in the mood for yet ANOTHER life changing event, this might be a great time to go to the bathroom! The word miracle is derived from the Latin word miraculum, which is derived from mirari “to wonder.” A miracle is an event that provokes wonder. As such, it must be in some way extraordinary, unusual, or contrary to our expectations.

Let’s start with the miracle of all of us, being together at this time and place exactly. Do you ever marvel, just marvel, at the unbelievable complexity of events and pathways, and coincidental moments that had to take place to gather this particular group of people, all born at different times and different dates, from all over the world, from all walks of life? To bring us, each and every one, to the Wharton Center in East Lansing, Michigan, on a Sunday afternoon, a sacred conspiracy of some pre-ordained and pre-destined journey to the here and now. Together. You are all one foot away from your new life, as a law school graduate, and one foot in here from your old life, as a student. Once you walk out that door today, nothing will ever be the same. 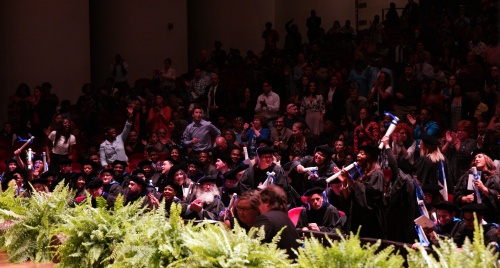 Some of you may be very sure-footed and clear about what is going to happen and where you are going next. You may have a well-thought-out plan, and a great job lined up. You have no worries about paying bills or student loans and you are good to go. You people need to get a life – you have obviously been working overtime!

Others of you, maybe many of you, may be hesitant to walk out that door, because reality waits, and the cold truth is – the picture is a little murky. Will you pass the bar? How will you pay everyone back? What if you don’t get a job? What if no miracles happen? Well, I believe in the Divine Perfection of the Universe, so we should probably move on to Miracle Number 2 before you start to panic about that whole student loan thing.

THE SECOND MIRACLE – AGAINST ALL ODDS – HOW DID YOU GET HERE?

Take some time today to take stock and reflect on the very personal and hard-fought journey that brought you here. What has your path been? How unlikely was it that you would be here today? Weren’t there naysayers and disbelievers when you said you were going to law school? Weren’t there financial concerns? What were your challenges along the way? What did you overcome? Weren’t there moments when you wanted to quit and you doubted yourself and you said, “ I can’t do this anymore.”

But you did. You persevered. And look around you. These brothers and sisters in arms – It is instant family, an unbreakable bond. You are now part of a community of people who have gone on to literally change the world. Governors and senators, CEO’s of Fortune 500 companies, mavericks and rebels, game changers and visionaries, everyone of them a graduate of this school.

I was not very focused and easily distracted – but somehow I managed to graduate respectably from college and started working as a legal assistant, which helped me get back on track about applying to law school. I signed up to take the LSAT. I did not study. They did not have prep classes like they do now. The night before, I was very irresponsible, went out with friends, partied too much, and barely made it to the test. I was hung over and late and I really had no idea what I was in for. I had never done a single thing to prepare for this momentous exam which was about to determine the course of my life. So you can imagine what went through my head when I read this first question, which was supposedly (allegedly) testing my logical analysis skills.

There are eight people in a line at the bank. It is a cold, snowy day. Three of the people have on scarfs and one of the scarfs has the color blue in it. One of the eight is sneezing. The second and seventh persons in line are holding wallets. The only man in line has on a yellow hat. One of them took Bus Route number six. Which one had oatmeal for breakfast?

Wait. What??? Whoa, I am in some serious trouble here. Holy crap. If this is what law school is all about, I am way out of my league. First of all, I don’t even eat oatmeal. And I am not proud of what happened next, and I truly hope that the statute of limitations has run with the Character and Fitness committee, but I panicked, and made the only decision I could think of at the time. I would just randomly fill out the dots with a number two pencil. And that is exactly what I did. Unbelievably, I miraculously passed, but just barely. I applied to only three law schools, and made the waiting list at one of them. But none of that is the real miracle. The real miracle is what happened next.

In my mailbox a few week later was what can only be described as a love letter from WMU-Cooley Law School. In essence, it said, ‘We know you’re the kind of girl who doesn’t follow the rules. Hey, neither do we. You want to follow the road less traveled, well, we are blazing the trail. We’ve got options – we are redefining who gets to be a lawyer in this country – we are opening the doors. You can come part-time, you can come full-time. You want to do weekends or nights so you can keep your day job? Not a problem. You don’t have to be rich, white or come from an Ivy League school, just be who you are, and let us give you the opportunity of a lifetime.’ 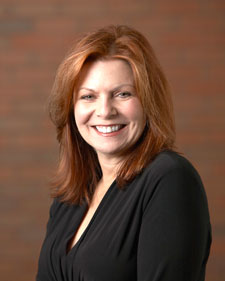 Well, sign me up!! They were playing my song. And I am here to tell you that everything amazing and wonderful in my life started the day I came to Cooley. And I did have the opportunity of a lifetime, and my friends, so do you!!

And I am going to bet that you have a similar story to mine about getting here. Maybe this wasn’t the school you originally picked out, maybe you never heard of Lansing, Michigan, maybe going to law school was something you decided to do because you lost a bet or got turned down at med school. Why you got here doesn’t matter so much right now as the fact that you WERE here and ARE here now. Trace those steps and stops and starts, and the twists and the turns. Follow that road map that brought you here, one step at a time, and see if you don’t believe, like I do, that it was a miracle.

There is always, always room for one more good lawyer in the world. So get out there, spread your star dust, and welcome to your miraculous life. As my friend Bob Marley said : ‘And don’t worry about a thing, cause every little thing gonna be alright!’