Verbal vs. Oral: Know the Difference 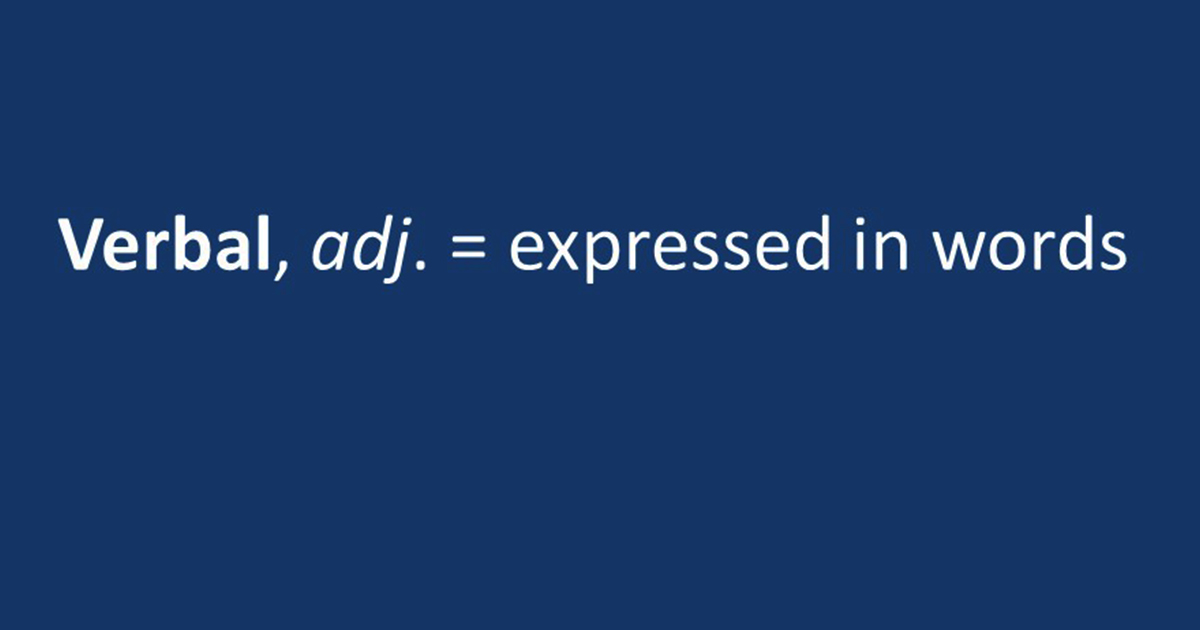 With the encouragement of my colleague Joe Kimble, editor of the long-running Michigan Bar Journal Plain Language column, I submitted “Help Wanted (and Needed!),” which appeared in the January 2019 issue. It called attention to help-wanted ads that demand excellent writing skills—but demonstrate something less.

The column reminded the Bar Journal’s 40,000+ readers that verbal means “expressed in words,” which can be written or oral. Verbal is a perfectly good word to use to include both written and spoken language. But verbal should not be paired with written because it already includes both means of communication.

In his Dictionary of Modern Legal Usage, Bryan A. Garner affirms: “The misuse of verbal for oral…is especially acute when verbal is opposed to written.” And lawyers, he notes, “are among the chief offenders in the oral-verbal confusion.” Elsewhere, Garner has recognized that some people think oral has acquired a prurient connotation. “If you think of ‘oral’ in a narrow sexual sense, you should immediately wash your mouth out with soap,” he admonishes.

Periodic sampling has revealed that most of the common errors have decreased in frequency across our state since the column’s publication. But misuse of verbal has increased.

During a two-month span in 2019, Pepper Hamilton advertised for an associate in its Detroit office with “excellent written and verbal communication skills.” Honigman sought a proposal manager in their Detroit office with “outstanding interpersonal, verbal and written communication skills.” Benmore Logistic Systems wanted an in-house attorney who “effectively communicates verbally and in writing.” Belfor Property Restoration in Birmingham sought a contracts attorney who can “clearly present data both in writing and verbally.”

Why is it that insurance companies take such pains when drafting their policies and yet display carelessness in wording help-wanted ads? Their Legal and HR Departments should join hands to bridge this gap.

What could be the source of this continuing verbal abuse? Adam Eakman, author of “Six Usage Mistakes Common in Legal Writing and Why They Matter” in the current Scribes Journal of Legal Writing, offers a possible clue: judges. He writes: “[W]hen judges use verbal, they nearly always mean oral.” He found more than 4,000 opinions by federal judges alone that referred to a “verbal agreement.” “In most of these cases, the judge meant an oral agreement.”

In the proper sense of the word, of course, all agreements are verbal (written or oral) unless they are implied in fact or law.

I haven’t run a word search of Michigan Supreme Court opinions. I’m confident that the skilled editors in the office of the Reporter of Decisions would not let verbal misuse make it into print. But Court-affiliated agencies have occasionally slipped up.

Within the past year, Judicial Information Services, the IT arm of the Michigan Supreme Court, advertised for an SQL Application Developer who can “communicate effectively, both verbally and in writing.” And the State Court Administrative Office posted a position for a qualified Business Analyst in almost the same language (“communicate effectively and efficiently, both verbally and in writing”).

Verbal for oral is a common misuse. But if effective communication is sought, so should it be demonstrated. We all—law firms, insurance companies, and the judiciary—need to do a better job of ridding the legal profession of verbal abuse.

Otto Stockmeyer is a distinguished professor emeritus at Western Michigan University–Cooley Law School. He is a past president of Scribes—The American Society of Legal Writers and a frequent contributor to legal periodicals and blogs.

Leading up to, during, and after the 2020 presidential election, WMU-Cooley Law School professors...
Read More