Debra Steele: You are only as strong as you believe yourself to be.

“The defining step in the journey to where I am today is the time I served in the United States Marine Corps where I was taught discipline, leadership, and the value of team work. The Marine Corps’ motto is Adapt, Improvise and Overcome. I have lived by that code for most of my adult life and it has brought me much success.” – WMU-Cooley Law School graduate Debra Steele

To say Debra Steele’s life so far has been a challenge is an understatement. Yet, you can also say that she has more than stepped up to any challenge, no matter how hard. She has looked adversity in the face, overcome all obstacles, and succeeded.

The challenges began after her service in the military. She attended college, all while working full time and managing a household. During this time, she went through a devastating divorce and found herself raising four children on her own with no financial or emotional support. “There were times when I worked two jobs in order to care for my children and meet my financial obligations,”stated Debra. “As many generations of parents before me, I was and still am determined to encourage my children to study hard and work diligently so they can have a better and easier life than I have. I want them to see that hard work pays off and they can become anything they desire as long as they have the determination to realize their dreams as I am doing now.” 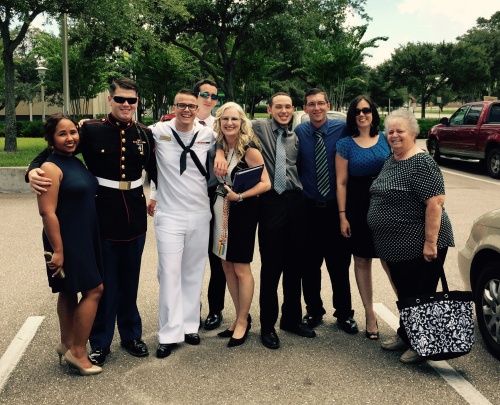 She believes that you really have no limits in life, except those we set upon ourselves. “I was diagnosed with lupus in 1991, and soon after, I began to have severe joint pain which was diagnosed as rheumatoid arthritis,” remembered Debra. “In 2002, the lupus became systemic and I was hospitalized for a while and unable to work; my family suffered a financial hardship. As I began to recover, my doctor advised me to apply for disability. I would not give up that easily. I believed then as I do now, that I can beat these conditions by living life and achieving my goals. That belief has not failed me.”

Debra would say that her professional history tells the tale of an ambitious woman working hard to make her dreams a reality. “During college I worked as a receptionist at a law firm specializing in workers’ compensation. In short order, I was promoted to legal secretary. I then moved to another firm to attain a higher position. After three years, this firm later merged with a larger firm and as a result, most of the support staff, including myself, were laid off.  Rather than considering this as a negative, I viewed this as an opportunity for growth and to expand my knowledge of the law. I was soon hired by Kass Shuler to work as a legal assistant. As it turns out, this was a crucial moment in my career because I began working with my mentor Larry Foyle, Esq. and he taught me everything about bankruptcy law and the rules of the Bankruptcy Code.”

In 2008, Debra was able to take her career to the next step and began working as the bankruptcy manager for Suncoast Credit Union. After taking classes and learning the ropes there, she was promoted to senior bankruptcy manager in 2011. In 2013, she again was promoted – this time to director of member solutions overseeing the Bankruptcy, Foreclosure, Fannie Mae and Recovery areas.

“Although I stay busy with my career and family, I make it a point to find the time to give back to the community,” said Debra. “I  serve on the Rifle Honor Guard, which allows me to assist in memorial and funeral services for fallen veterans, and have served as president of WMU-Cooley’s

Military Veterans Law Student Association. I also serve my community through volunteer programs and charity events such as Adopt-a-Highway, Walk for Lupus, epilepsy fundraisers, etc., totaling approximately 80 to 100 hours per year.  I have received a Meritorious Service Award from the Marine Corps League and several other service awards through Suncoast Schools. However, I am most proud of earning the Marine of the Year Award in 2009 and the Diamond Award at Suncoast Schools.”

“I agree with the phrase, ‘that which does not kill you makes you stronger.’  Even though I have had to overcome many obstacles, I believe conquering those challenges has made me a stronger, more determined person. I am the first person in my family to graduate from high school and college. By going to law school, I want to show my children that one can do anything they set out to do if they have the will to make it happen.”

Anyone who knows Debra, and has worked with her, can attest to her strength, commitment and leadership qualities, along with her dedication to her community.

“Debra has stated on many occasions that she believes in leading by example, and she practices this leadership style in her personal and professional lives,” stated Antonio Hill, former PSCU Financial Services vice president of marketing. “Over the years, I have gotten to know Debra’s family quite well.  She is a dedicated mother who constantly encourages her children to follow their dreams and supports them in all of their endeavors. By fulfilling her dream of becoming a lawyer, Debra will show her children that they can always achieve their goals regardless of any obstacles they might face.”

“Debra Steele is a rare person who is selfless and devoted to making a difference in the lives of others,” stated Judy Cayson, Suncoast Credit Union Bankruptcy Administrative Secretary. “Her positive attitude and love of life and country are contagious! She is an outstanding example of someone whose life reflects a sincere desire to serve others in whatever opportunity is presented. I have witnessed many of those opportunities in the over four years in which I have been privileged to work for her. She is continually involved in many types of community events that affect the lives of others in positive ways.”

“As a member of the Honor Guard, Debra has had to console bereaved family members at funeral services, escort family members at honor ceremonies and perform military honors,” shared Walt Raysick, president of the Veterans Council of Hillsborough County. “She and her detail have received many accolades for their performance and the finest display of military bearing.  Her performance has provided comfort for those involved in these ceremonies.”

As Debra stated during her WMU-Cooley graduation valedictory speech, “law school is a rite of passage to becoming a lawyer and our hard work has paid off. President Lincoln once said ‘Discourage litigation. Persuade your neighbors to compromise whenever you can. As a peacemaker, the lawyer has superior opportunity of being a good man. There will still be business enough.’ Let’s take his advice and be peacemakers, good men and women. Let’s continue to make a difference. I congratulate each and every one of you and wish all of us much success. Now go pay it forward!”

Debra has stood tall amidst many obstacles but has fulfilled her life dreams – all while making a difference to others. What are some of the ways you have overcome adversity to achieve your goals?