Taking on the world is something WMU-Cooley law student Ashley Hart is not afraid to do. In fact, it's in her blood. She not only feels the need to help others, she wants to make sure she is at the table in making policy decisions on their behalf.

"I’ve always been somebody who wants to fight for the underdog," smiled Hart. "That drives me every day — a passion to serve those who otherwise would not be able to help themselves."

Coming from Plant City, Florida, a farming community, Hart has been exposed to other cultures and their struggles. Those struggles were something she wanted to do something about.

Helping Immigrants in Their Journey

"I've always had a keen interest in trying to understand how people came to live in a community, and the reason behind that migration," explained Hart. "It's usually due to their need to escape persecution, or to find a new way of life. I thought to myself, what better way to help immigrants than by assisting them in that journey."

Most recently she spent time as an intern with the United Nations Refugee Agency. She was able to work directly with immigrants in detention, stateless determination, and seeking asylum. She also attended Congressional hearings which sparked an interest in possibly being an attorney on the judiciary committee.

"I think it is important to have people who are passionate about immigration as their advocate," stated Hart. "Someone who will stand up for them and believe in them."

After returning from her internship with the United Nations, Hart was able to secure an internship with U.S. Representative Kathy Castor of the 14th District of Florida. She is excited about the opportunity in this experience to foster her interest in policy making and immigration legislation and to work with people seeking asylum.

"I think, in general, we need to understand people more," said Hart. "I think that is one of our biggest issues as Americans. We don’t truly listen to one another. We are quick to judge and make assumptions. I think, until we start trying to understand people and where they’re coming from, and their walks of life, then things can't go anywhere."

Hart is ready to have those tough conversations.

"I want to be part of a solution, which includes starting conversations and keeping those conversations going," added Hart. "We can't keep brushing hard topics under the rug because nothing gets solved that way. People are only open to change when they have been heard and they know you believe in them."

Community Near and Far

"My parents are hard workers," reflects Hart. "I’m actually the first in my family to graduate from college and to go to law school, which is huge. I’m stepping out from the mold and showing everyone how it's done. I live with my cousins right now. But if not for my family, I don't know if this all would be possible. My time with family and friends keeps me sane."

In addition to her career goal and focus on Immigration policy and legislation, Hart also has a passion for helping young girls who are victims of human trafficking. 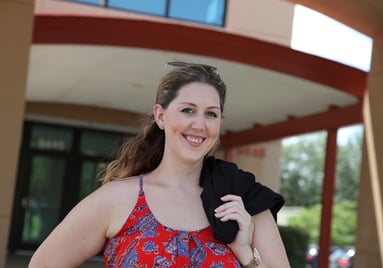 "I’ve worked with Redefining Refuge, which is a local safe house for teenage girls that have been human trafficked in the Tampa Bay area," shared Hart. "Some of the girls still reach out to me. It means a lot. I think it's important to give back to your community."

Giving back and helping others is more than a mantra for Hart. She has gotten involved and engaged at every step, taking advantage of all her resources. She recently was asked to make remarks during a U.S. Naturalization Ceremony hosted at WMU-Cooley Tampa Bay as part of Women's History Month. Sixty candidates from 25 countries were sworn in as U.S. citizens.

Being involved in law school and her community, and making people connections, are things Hart takes to heart. That includes reaching out to the law school's wide network of graduates. If you ask her friends and family, they say Hart has a way of easily connecting with people; through having open conversations and listening without judging.

"It excites me to know that Cooley has such a vast alumni network," exclaimed Hart. "We have graduates all over the world. I plan to take advantage of that, especially in the DC area where I hope to land my dream job."