WMU-Cooley graduation speaker: Others don’t have to fail in order for you to succeed

“Because of Cooley, you are now prepared to join in the battle for justice; to be the voice for the voiceless, to bring hope to the hopeless, and to speak justice for those who suffer injustice … In pursuing success in the profession, remember that success is not a zero sum game. Others don’t have to fail in order for you to succeed.”

– Frederick McClure, managing partner at the Tampa Bay office of DLA Piper and president of the George Edgecomb Bar Association.

On Saturday, August 15, the Tampa Bay campus of WMU-Cooley Law School held its graduation commencement ceremony at the University of South Florida’s School of Music Concert Hall. The keynote speaker was Fredrick McClure, managing partner at the Tampa Bay office of DLA Piper and president of the George Edgecomb Bar Association.  McClure is a member of the board of trustees for Earlham College, the former president of the Tampa Club, and the former chairman of the board for the Greater Tampa Chamber of Commerce. His practice areas include litigation, arbitration and class action, and employment disputes.

As Frederick McClure stated in his keynote address, “Some of you have known since birth that you would become a lawyer; some of you decided in elementary school or high school.” McClure decided in college. 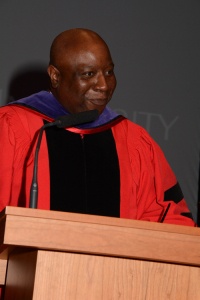 “However or whenever it was you arrived at your decision, you now have received a quality legal education and gained the right to seek admission to the bar and membership in this great and noble profession. Because of that education, however, you have also lost some rights. You have forever given up the right to be an ‘ist’.

“As I look out onto this beautiful rainbow of a class, I smile broadly, because I see hope for the future.

1. “Because this class is such a rainbow, you have given up the right to be sexist, believing that intellect and the capacity for greatness resides only in those of your sex;

2. Because this class is such a rainbow, you have given up the right to be racist, believing that intellect and the capacity for greatness resides only in those of your race and/or ethnicity;

3. Because this class is such a rainbow, you have given up the right to be a phobist (yeah, I know, the correct word is “phobe,” but work with me here!) believing that intellect and the capacity for greatness resides only in those who share your sexual orientation or gender identification.

“None other than Dr. Martin Luther King warned that ‘Nothing in all the world is more dangerous than sincere ignorance and conscientious stupidity.’

“Because of Cooley, you have forever lost the ability to be sincerely ignorant on these matters;

“So, if you adopt and/or hold on to such foolish ideas, you are, I am afraid, conscientiously stupid.  Just remember, you are Cooley, and you are better than that!”

When he was growing up, and even though his dad was a lawyer and his sister always dreamed of becoming a lawyer, Matt Marin felt he wanted to do something different than pursue a job in the profession of law. In fact, he obtained a science degree in biology, from Lawrence University, with the intention of going to medical school. However, he wasn’t sure medicine was the right fit for him.

“My sister, Marybeth, knew that I was having second thoughts about attending medical school, so she encouraged me to take the LSAT,” remembered Matt. “Next thing you know, I was starting law school at WMU-Cooley, and my sister started three months later at WMU-Cooley too!”

Matt loved the challenge of law school and realized that he truly enjoyed learning the law and being a part of academia; in fact, he decided after graduating from law school to accept a position at WMU-Cooley’s Tampa Bay campus.  A year later, Matt decided that he wanted an advanced degree in law – an LL.M. in Intellectual Property – which could dovetail into his science background.  He applied and was admitted into the Intellectual Property LL.M. program at WMU-Cooley’s Auburn Hills, Michigan campus. What made this nearly perfect for him was that he could pursue his teaching career in WMU-Cooley’s Academic Resource Center while wrapping up his WMU-Cooley LL.M. classes online.

With his WMU-Cooley LL.M. degree in one hand and his WMU-Cooley Juris Doctor degree in the other, he is thrilled to continue teaching law students what it takes to succeed in the classroom and how to pass the bar exam.  When asked if he ever thought of joining the family business in Marquette, Michigan, which his sister has since taken it over, he takes a stand:

“I have thought about going back to Marquette to work in private practice with Marybeth, but then I think about those 200 plus inches of snow that Marquette gets in the winter. Coupled with the students, my fantastic colleagues at the Tampa Bay campus, and of course the tropical weather, it makes the decision to stay here pretty easy.”