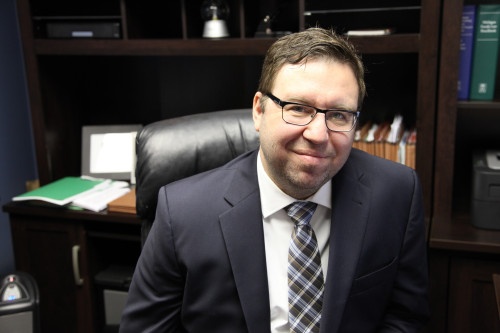 Josh Mikrut spent his entire academic career in West Michigan, including his undergrad years at Grand Valley State University majoring in political science and philosophy (with a minor in Spanish), and his master’s degree in international development administration at Western Michigan University, where he also met his wife.

Mikrut had previously considered joining the military after graduating from WMU, but knowing that he soon would be married, he decided it was time to start focusing on his legal career. He started looking around at law schools in the West Michigan area and WMU-Cooley was the obvious choice for him.

“At the time, WMU-Cooley had just opened a brand new campus in Grand Rapids,” recalled Mikrut. “I knew because I saw the highway signs promoting its Open House. My wife and I attended, and we were impressed. The law center was a fantastic, beautiful, brand new facility, with a beautiful library, in particular. We met up with faculty and took a tour. I learned about their generous scholarships. I thought it was cool that I wasn’t able to lose that scholarship – I got to keep it throughout the time that I was enrolled at WMU-Cooley. Plus, I remember that, although I didn’t have a 100 percent scholarship, I could increase my scholarship during law school depending on my academic success. That really attracted and motivated me to attend WMU-Cooley Law School.

“My primary goal was to make law school affordable. I had debt already from undergrad and graduate school. Of course, going to law school is never cheap, but WMU-Cooley makes it possible for anyone with initiative and a good resume to do really well.  After I met the Dean of the Grand Rapids campus and did some background checking on WMU-Cooley, I  just really didn’t feel like I ever needed to look anywhere else.

Mikrut is happy to say he made a great decision, and he appreciated the experiences and legal education he received.

“I knew I wanted to include an international aspects to my legal practice, but I purposely undertook many other different extracurricular actives, with the goal in mind of trying things out to see what fit. It also made me realize a lot about my likes and dislikes. Through my Moot Court experiences, I discovered that I didn’t like the idea of doing criminal cases, but I loved litigation that involved motion practice and doing arguments in front of judges.

“It’s funny. The ideas I went into law school with — what I was looking for, what I had thought I wanted to do — was completely different from what I ended up doing,” chuckled Mikrut.

After graduating in January 2011, passing the bar in February 2011, then starting the network process, Mikrut met up with one of his former classmates. His friend worked for a big firm in town, Smith, Haughey, Rice & Roegge. 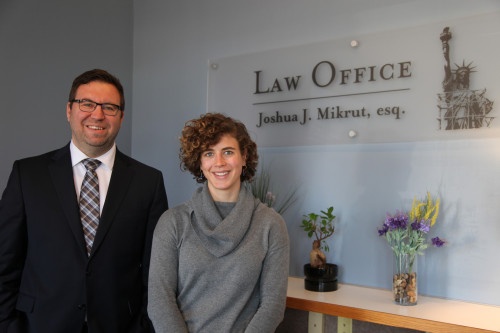 “I had lunch with him one day because I knew some other people at Smith, and I wanted to get on their radar and check out the possibility of getting a job there. My friend pointed out to me that he knew that I spoke Spanish. He had another friend who was looking for people that spoke Spanish because their law firm served, for the most part, exclusively to the Latino community in West Michigan. I dropped off a resume to the firm and they hired me shortly after.”

It was from this out of law school experience that Mikrut was exposed to immigration law — something he had never thought of during law school.

“It was fascinating,” exclaimed Mikrut. “It had all kinds of aspects that I was interested in. I was attracted to the fact that I was in the courtroom working in front of a jury. I loved the opportunity to use my Spanish and be a lawyer at the same time.

He learned a lot during the three years he worked for the firm, and in December 2014 he was able to open his own Immigration Law firm, The Law Office of Joshua J. Mikrut PLC.

“There is a tremendous international component to practicing immigration law that I love — the multi-cultural aspect. Plus immigration law is a very large field that you can sub-divide. Things like removal practice, family practice and employment-based practice. Removal practice is a lot of what I do now. It’s defending folks that are in the process of being deported that are in removal proceedings before an immigration judge. That’s just one big area of immigration law practice. It’s been amazing to be involved in such a relevant area of legal practice. It’s important to me to help. My mission and vocational focus is to provide outstanding and accessible legal service to a population of people who really need it.

According to Mikrut, “In the political climate today, there is an incredible, huge gaping hole, need for lawyers to do what we’re trying to do here.”

“It’s difficult to see this play out on the ground every day. It is an incredibly important job and it’s very, very easy to feel passionate about it, and feel much sympathy for my clients.”

As Mikrut reflects back on his time at WMU-Cooley, he is thankful for the path that brought him to where he is today.

“I just can’t believe I am running my own civil practice,” exclaimed Mikrut. “I never would have thought this is where I would end up. I am super happy doing it. I feel like I am living the American dream by running my own business. I think a big part of what emboldened me to even try opening my own business was having met and known and encouraged by so many great lawyers that I met while at WMU-Cooley. The relationships I had with so many of my professors, including giving me much of their time to give me both academic and personal advice. I had fantastic professors that instructed me. I had fantastic examples that showed me what it looked like to do this job. Getting to know these lawyers really well, and having felt that they really poured their souls into what they offered us, really made me feel like I knew what it meant to be a lawyer before I was one.

This blog was originally published on May 5, 2017.