In the last decade, Aaron V. Burrell (Woodward Class, 2010), a business lawyer with the Detroit office of Dickinson Wright, has become acutely aware of dynamic shifts in the way law is practiced. Burrell, who serves as co-chair of the firm’s diversity and litigation-training committees, and has a busy practice in complex commercial litigation, appellate law, and labor and employment law, is in a prime position to note changes in the legal arena.

Gone are the days, stated Burrell, when law firms could overlook the growing diversity in society.

"In fact, as a partner at Dickinson Wright," continued Burrell, "I see that most of our clients now mandate diversity. The law is changing, and it’s changing at a rapid pace. Our clients do not want a law firm that hasn’t fully embraced the population that our clients serve."

That's just one way the law has seen change, according to Burrell. There have also been rapid changes in technology, recruitment, and the basic, core ways of practice.

CHANGE FOR THE GOOD

To Burrell, these changes are positive for those who are poised for the future of change.

"When I look at law schools that, quite frankly, are behind the times; those that have been slow to embrace diversity, they will ultimately find themselves irrelevant and obsolete,” he said.

The law school's board echoes Burrell's perspective, bringing on additional members with differing positions, geographic differences, and varying perspectives to challenge and move the law school forward. Burrell said he feels confident that the enthusiasm of new President and Dean James McGrath will inspire the modernization and cutting-edge approaches in how legal education is offered, while continuing to embrace the law school's core mission of inclusiveness.

FOUNDED ON PRINCIPLES OF EQUALITY

"Inclusiveness is vital in our justice system. As a result, we are obligated to make sure the legal profession represents and embodies the people to whom we are accountable."

Burrell is proud of how the legal profession is leading the way; where lawyers are starting to lead society in a better way. That reflection in the mirror started with law schools like WMU-Cooley, according to Burrell.

"WMU-Cooley has done what many law schools are unable to do, which is to make sure every entering class has meaningful diversity — not just diversity for the sake of diversity, but true inclusion as members of the law school, admitted on the same standards, in a community that embraces their differences, embraces what they bring to the table."

Diversity in the classroom "ultimately, makes for a richer education, a more robust discussion, and brings together perspectives from individuals you may have not heard in the past," he said.

"WMU-Cooley was founded upon the principle that everyone who works hard should be able to earn a law degree. The law school has always looked at an all-encompassing view of the person, and we’ve given those individuals who have demonstrated clear potential, the opportunity to make it."

What that means in real terms, according to Burrell, is that every individual will need to work very hard to earn the privilege of calling oneself a lawyer. "We will work you, make sure you learn and have the practice-ready skills you will need as a foundation for success to become a contributing member of the bar.

"It’s not going to be handed to you. You aren’t successful solely by getting in, you are successful by graduating. That is the WMU-Cooley mantra." 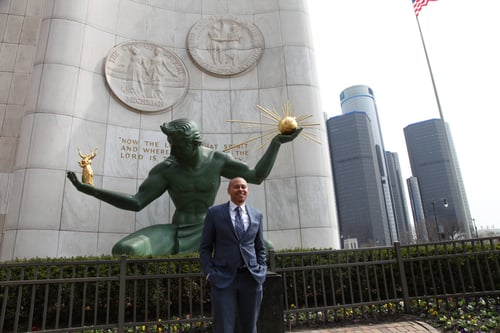 As much as Burrell feels energized by the many changes he has been seeing, he also recognizes that there will likely always be some barriers to justice.

"I still see the law balanced, in some respects, in favor of those individuals who have the most," conceded Burrell. "It’s easier for someone who has means and resources to achieve certain access to justice than those with limited means. They face many more barriers due to economics and other disparate factors."

Burrell is doing everything in his power to transform hearts and minds. Businesses are no longer accepting “barriers on women, on advancement, inequality to pay, types of assignments and opportunities. It's good to see that people not only are fully aware of the problem but that they want to make changes for the better."

Burrell started out on a business route, as early as in high school, with no aspiration for a legal career. He became heavily involved in the high school division of DECA, formerly know as Distributive Education Clubs of America, which is an international non-profit designed to prepare emerging leaders and entrepreneurs in marketing, finance, hospitality and management. He got to travel the country, and even won awards for the work he did for the organization.

"I thought I was heading in the right direction," recalled Burrell. "The experience gave me great presentation skills, and the ability to understand how to sell something.”

That success in high school directed him to the University of Michigan’s Dearborn campus to follow his path of business in college — until some things happened to make him stop and pause.

The recession hit, and Burrell started worrying about whether or not he would be able to get a job and provide for his family. More importantly, he was influenced by the classes he was taking, especially African and African American History. It was during those classes that he visualized how he could better contribute to society.

"I saw that many individuals responsible for the milestones that this country has achieved are lawyers. They have played such an important part of where we are as a country. I was particularly inspired by the African American lawyers that I read about, especially Thurgood Marshall, who first took the injustices of prejudicial policies in his hometown, but graduated first in his class from Howard Law, then took a stance against a law school that unlawfully denied him admission. That, for me, showed me that I could make a significant difference for people in the world of law. I thought 'I can do this.' I felt I had the speaking skills and the writing ability, along with the diligence and focus, to do it. I decided to switch courses from a business track to political science. I had a great time learning about political theory and why our justice system is what it is today. That is what ultimately led me to applying for law school. And WMU-Cooley was the only law school I applied to."

ALL IN AT WMU-COOLEY

"I was attracted to WMU-Cooley for a number of reasons," stated Burrell. "The first, after attending an open house that the school had on campus, I met with a lot of professors and who were not only knowledgeable, but passionate about what they did. They were really enthusiastic about their field and legal education. They wanted to see their students succeed.

"As I was walking to the car with my wife, and we weren’t married at the time, I said, 'Okay, I am going there.'

"The other thing that really attracted me was the flexibility. Because WMU-Cooley has so many options. I was personally interested in the more accelerated schedule because I wanted to complete my courses quickly. The fact that I could complete my legal education in two years was very attractive to me, so I could start my career sooner rather than later.

"Finally, I like that certain aspects of the scholarships awarded are based on your performance and hard work. That appealed to me because I knew that I would go in and work diligently, and be focused on succeeding.”

Burrell continues to promote WMU-Cooley Law School, as a graduate of the law school, and now as a board member. He is especially proud of the law school's mission, its rigor, and its emphasis on training students to be lawyers.

"As a lawyer representing your clients, you're going to have to work hard, and they're going to expect a lot from you. And before you get your first client, you are going to have to work hard and expect a lot from yourself. That's what I learned from WMU-Cooley Law School. It gave me the opportunity to really see what I was made of; see what I was capable of doing, and, in the end, I was saying, 'Hey Aaron, if you can make it here, you can make it anywhere!' And I've been doing it ever since."