What is Gerrymandering Anyway? Con Law Expert Professor Brendan Beery Breaks Things Down on this and other SCOTUS decisions.

Constitutional Law expert Brendan Beery is often tapped by the media to give comment or to explain the law, as nobody else can, simply and to-the-point. Below Professor Beery recently breaks things down for Tampa's Bay News 9 TV host Al Ruechel on elections and voters rights. Professor Beery teaches Constitutional Law, Criminal Law and Criminal Procedure at WMU-Cooley Law School's campus in Tampa Bay, Florida.

Q: There is a bill on the docket addressing gerrymandering, which is described as the practice where lawmakers divide each proportion of where voters live in certain districts to supposedly favor their particular party. What is the Supreme Courts asked to do?

Beery breaks it down: The Constitutional Principle at play here is the equal protection clause, which guarantees one person, one vote. Equality. No matter what group the state legislature is trying to disfavor, if a court thinks there is some kind of funny business going on, then they would apply a very high level of scrutiny. The issue on the docket pertains to political gerrymandering, not ethnic gerrymandering. In short, the Supreme Court has thrown up its hands and said, “Well, what are we supposed to do about it because anytime Democrats control the state legislature, of course they are going to favor Democrats, and vice versa.

Because there’s no such thing as a political district in the United States that’s not somehow politically gerrymandered, then it's unreasonable to invalidate all of the districts. There’s a long phrase that the court says when there is no clear answer. If we lack judicially discoverable, manageable standards for resolving a case, then 'we don’t want to hear it.' That’s a lot of syllables, but all it means is, 'Look, if we don’t have a legal framework or rule for dealing with an issue, then we’re not going to deal with it.' They’ve decided this is one of them. There is no test for political gerrymandering.

Now if someone comes up with a rule, only then will the Supreme Court consider ruling on Gerrymandering.

With that, some academics in Wisconsin came up with a test called wasted votes, where you count wasted votes. It goes like this. Let’s say you have a district where there are 90 Democrats and 10 Republicans who live in the district, and every time you have an election, there’s going to be an overwhelming Democratic win. Wasted votes means that you would look at how many votes democrats wasted above and beyond the number that they would have needed to win and how many votes Republicans wasted in a district that they can’t win anyway. That’s called wasted votes. They’ve come up with this little formula saying that we can count wasted votes at a ratio and decide if things are so out of whack, that the district is impermissible gerrymandered. That’s what is in front of the Supreme Court now, this new proposed rule. 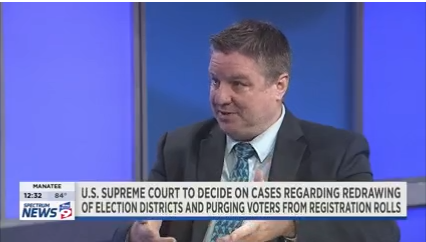 Q: Voters rights is on the block, and there's a question about whether a voter's rights can be purged for failing to answer a warning. What was the warning?

Beery breaks it down: If you don’t vote for two years in Ohio, they send you a notice via snail mail, and if you don’t return that notice and don’t vote the next four years, they take you off of the voter rolls. So I call this the use it or lose it votes. The allegation is that people, particularly those who are poor, are disproportionately impacted. This especially impacts the working poor who often don’t vote because they are working three jobs and don't have time to worry about their mail.

The word on the street is that the Supreme Court is leaning with the conservatives on this one. They are saying they don’t want dead people voting. States have to clean up their voter rolls as long as you’ve got this notice requirement in there.

Q: The second part of the bill concerns banning voters from wearing political clothing at polling places. Do you think this will pass?

Beery breaks it down: So far courts have said that states have a compelling interest to keep politics out of the polling places, but there is also a rule that states aren’t supposed to target content of speech, especially political speech, without facing a very high level of scrutiny. So, that's what they are going be looking at here. Basically, what test do we apply to this? Do we apply an easy test called a time, place matter test. It’s a reasonable restriction about where this is happening or because it targets political speech. Do we apply a much higher standard? The restriction would have to be what courts call, narrowly tailored, really precisely drawn.

Although this appears to be a small issue, the court sees it as a bigger issue of political speech. What’s standard? And if it is a polling place, what do we do when the state is burdening political speech?

My sense is that the court is probably going to apply a higher standard, called strict scrutiny, where they’re going to say, 'Look, we understand your interests, but if you are going to stop people from having political messages on their clothing, this is going to be very tricky.' This test called narrowly tailored is part of the strict scrutiny means for example, how many feet you have to be away, or whatever, has to be so precise that it is a perfect law. That is very difficult for states to do.

Q: What does a narrow vote me in the Supreme Court's 7-2 ruling in favor of the Colorado baker who declined to make a cake for a gay couple's marriage?

Listen to Professor Beery break it down on WILS 1320 radio's Dave Akerly Show: