Victoria Cruz-Garcia has returned to WMU-Cooley Law School’s Tampa campus with a wealth of legal experience and a bottomless bucket of enthusiasm for legal education. Add to that a heart for the underdog and you have an ideal person for instructing future lawyers.

Assistant Professor Cruz-Garcia isn’t new to WMU-Cooley. She served as an adjunct professor in 2012 and 2014, returning each time to practice and litigate, most recently as a principal at Givens Givens Sparks PLLC, in Tampa. Now she hopes to continue to build the WMU-Cooley legacy by helping law students realize their potential and their dreams.

As a youngster, Cruz-Garcia didn’t have a life one would think could lead to a law degree. Or did she? Sometimes adversity is the best teacher. Her mother cannot read nor write, yet Cruz-Garcia was the first in her family to graduate college and law school. In fact, she had never even met a lawyer until she became the victim of a mugging at gunpoint, right in her own driveway.

“They caught the guy so I had to go to trial and that whole process was just fascinating to me,” she recalled. “Being in a courtroom and being the witness — because I had to link him to my case which would then link him to a murder — the defense attorney was pretty brutal on me. I stuck to my guns because I knew the truth and I knew what I had experienced.”

After the hearing, the judge told her to stay behind and asked if she had ever considered a law career. When she replied that she hadn’t, he told her “You should think about it. There’s something about you.”

Most teenagers would have laughed it off, but Cruz-Garcia was not most teens. Instead, she thought, “Here this judge who is a big deal is saying he sees something; maybe I should go and explore it.”

Already in college in Puerto Rico at the age of 16, Cruz-Garcia spent time in the library researching careers. After looking up possible law schools in New York where she was born, Cruz-Garcia decided that was her path and chose the John Jay College of Criminal Justice. But, not being raised in New York, she underestimated the distance between her sister’s home in New Jersey where she would stay and the college. Ultimately, she was accepted at nearby Rutgers University as a criminal justice major and graduated in 1994.

By then she was married and working as a law firm secretary, Cruz-Garcia decided it was time to start a family. But four years later, she and her husband were still childless. To get her mind off it, her husband Sergio Garcia suggested she go to law school and redirect her energy and her disappointment. He even brought home an application. It wasn't much later she began law school, only to become pregnant in her first semester. Her first son was born during “reading week” and Cruz-Garcia returned to take her finals. Before she finished law school a second son was born, capping her desires for a family and a career in law.

Over years in law practice, she was the founding partner at Cruz-Garcia Law, P.A., where she practiced primarily family law and commercial litigation and at Givens Givens Sparks PLLC she devoted all of her time to her passion, family law. But even with all that she has accomplished as a lawyer, the chance to teach the law far exceeds any other ambition in her eyes.

“When the opportunity to teach full time came along, for me, being an educator is like 10 levels above practicing law,” she said. “I know it sounds weird. When I told my dad he was like, ‘What!? You are not going to be a lawyer?’

“Preparing people to become lawyers, especially for someone whose mother doesn’t know how to read or write, to become an educator in your field, in the law, I can’t even describe it. I get emotional because I can’t even put what it means to me in context. I know that my when they talk about me, their hearts fill with pride and they say, ‘My mom is a law professor.’ More so than ‘My mom is a lawyer and kicks butt.’”

As a litigator, Cruz-Garcia feels her experience helps make her classes and her teaching style unique. She prepares for each class just as she prepared for each trial. 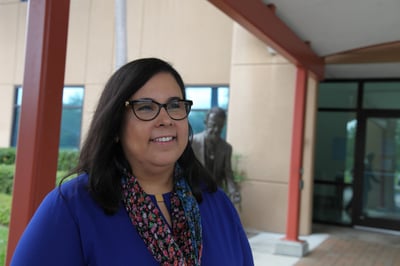 “I have a trial notebook I divide into 14 weeks and all of my materials are in there and every class I prepare to set it up almost as if I am talking to the jury,” she said. “My students are the people who I really need to convince that this is what the law is, and this is how the outcome should be.”

And she expects the same level of analysis and scrutiny from her students when they’re preparing for and taking exams.

“Talk to me like a lawyer, how would we resolve this? What does the law say? What are the issues? How will you convince me based on our facts that the law applies this way and that the result is nothing other than what you are advocating?”

Most of all though, Cruz-Garcia appreciates how much someone can want a law career and is willing to accept great sacrifice and endure hardships to get it. She knows how it feels because she was there once. And she says every term there are a few people in her class who have extraordinary stories of struggle, but who just will not back down. She draws strength and pride from helping them achieve their goals.

“Here are these people with more difficult issues than I ever encountered and they’re doing it. It just circles me back and renews that passion every semester,” she said. “Every semester there are one or two students that come and share their story. It's incredible the obstacles they overcome, and still trying to overcome, when they’re here. Yet they maintain their steadfast path to the finish.”

In addition to teaching, Cruz-Garcia is always looking for better ways to help others and to improve legal education. One thing she accomplished at WMU-Cooley is the addition of Juvenile Dependency & Delinquency classes, which she teaches in addition to Torts and Florida Family Violence. She also is the creator of Cooley Communicates that provides court interpreters for pro se litigants.

Among her many accomplishments are:

Cruz-Garcia currently serves on the Florida Bar Association Committees for Diversity and Inclusion and the Judicial Nominating Procedures Committee. In the past, she served as co-chair of the Awards Committee for the Hillsborough Association for Women Lawyers.