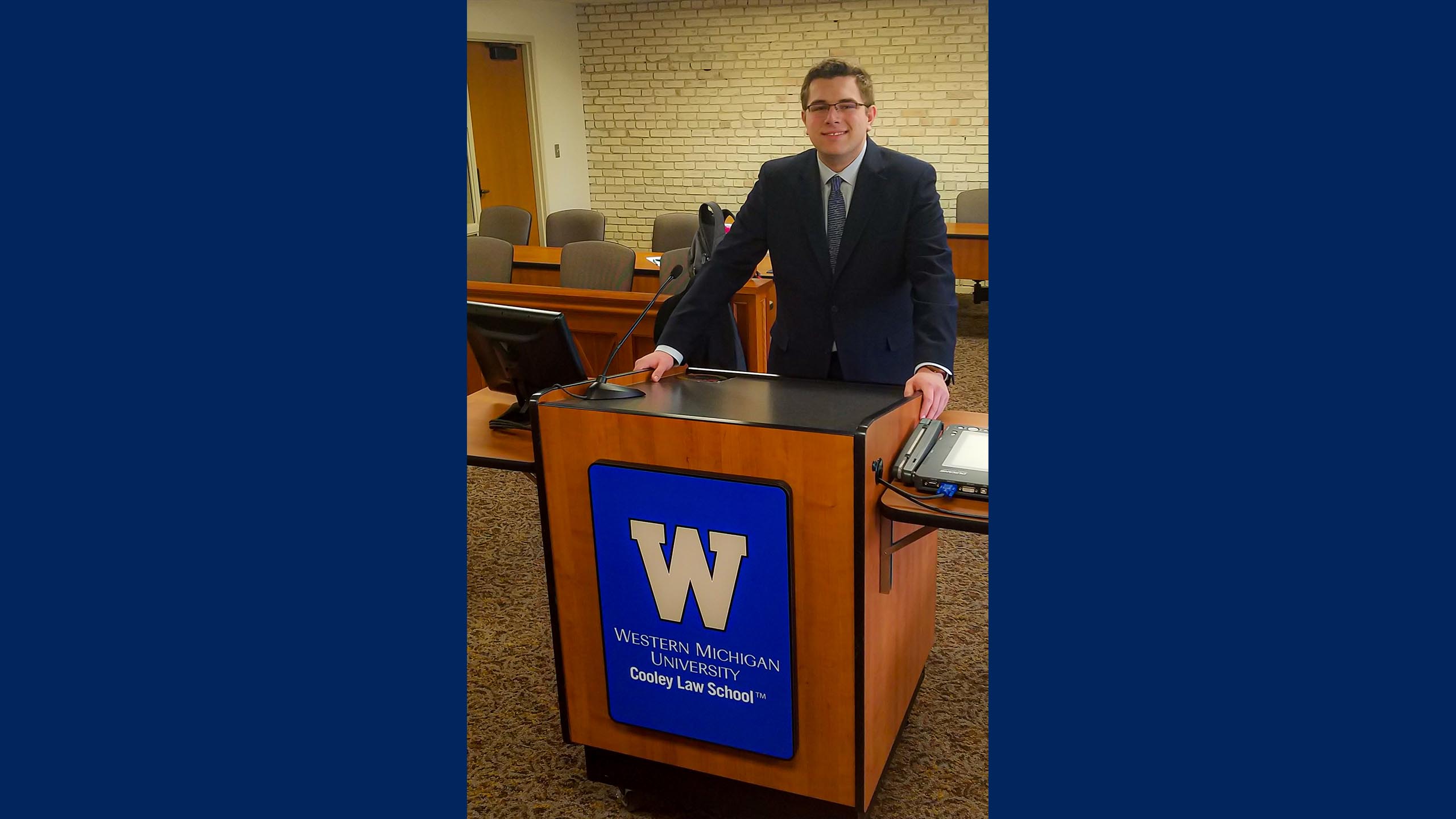 Cooley Law School alumnus Rick Conklin always had a passion for the law—and while earning his undergrad degree in communications from Grand Valley State University, realized Lady Justice was calling his name.

Evidently it was the right decision for the Grand Rapids native, who attended the local campus of WMU-Cooley Law School where he was on the Dean’s List and Honor Roll. At last November’s virtual Honors Convocation, he was one of three students who received the law school’s top honor, the Leadership Achievement Award.

Conklin says he appreciated Cooley’s approach to teaching practical applications, the small class sizes offering more individualized learning, the fact that most of the professors had practiced in the local legal community, and that the campus fostered a mentorship program.

He served as secretary of Moot Court, and strongly recommends law students try the program at least once. “It’s a great way to interact with other students and to get a chance to improve your writing and advocacy skills,” he says. “It pushes you outside your comfort zone and gives you experience you can’t get in a classroom.”

Conklin also recommends the Hillman Advocacy Program. “The practical applications of this program are invaluable, and I strongly encourage any attorney who has not gone to it to check it out,” Conklin says.

In his 3L year, Conklin served as president of the West Michigan Student Bar Association (WMSBA), where he previously served as a senator. “It’s been an honor and as well as an interesting experience due to the effects of having to operate remotely during COVID-19,” he says. “One of the things I enjoyed most was being able to work more with the amazing faculty at Cooley Law
School.

“I also enjoyed being able to work with a dedicated group of students on the WMSBA Executive Board. This group was able to transition to working remotely which allowed us to help law students during lock down and all their hard work allowed us to still be able to host our annual in-person 2020 WMSBA Barrister’s Ball which raised over $1,000 for the Hospice of Michigan’s Anchors Program for Children, one of only a few dedicated pediatric hospice services in the country.”

A short-term goal for Conklin, who also served as a teaching assistant for Professor Devin Schindler, is to pass the Michigan Bar Exam and start work as a law clerk at Plachta, Murphy, and Associates in Grand Rapids.

“My long-term career goals are to continue to grow as an attorney with the help of my mentor Bryan Reeder, managing partner at Plachta, Murphy, and Associates, and to continue to help and make a difference in my community,” he says. “Part of being a good lawyer, in my opinion, is to be able to understand a client’s issue and break down the law surrounding that issue into something they can understand, which will help them make informed decisions.”

In his leisure time, Conklin enjoys hiking, backpacking, camping, and rock climbing. He is an FAA Commercial Drone Pilot and runs his own business. 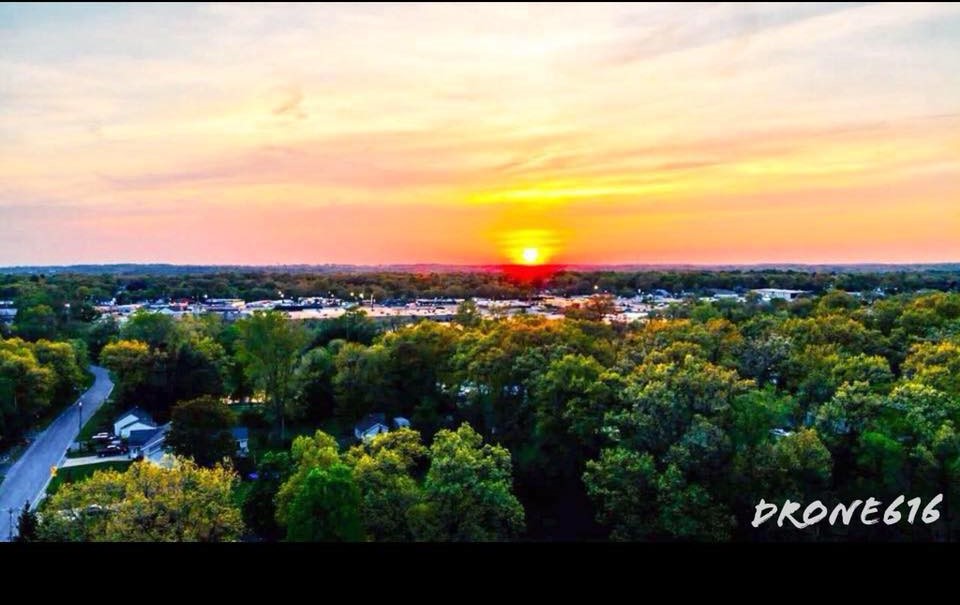 “I’ve had the pleasure of working with businesses and organizations in Grand Rapids, providing content to promote their business in a unique way. I’ve also developed a passion for exploring the complex and uncertain area of drone and Unmanned Aircraft Systems law.”

An Eagle Scout and assistant Scoutmaster, Conklin says the Scouting program provided him with experience and skills that made him into the person he is today.

“And after attaining the rank of Eagle Scout, I knew I needed to pay it forward and become an assistant Scoutmaster to help continue to foster the values like leadership and strong character,” he says. “Scouting was rewarding not just because it promoted my love of the outdoors, but also allowed me to spend time with my family and create friendships that are lifelong. I strongly recommend this program.”

Through the Scouting program, Conklin became involved as a precinct delegate for Grand Rapids Charter Township, serving from August 2014 to the present. “When I was asked to step up, I was more than happy to answer the call,” he says. “Since my election and re-elections, I’ve been able to participate in decisions that directly affect my community, as well as continue to represent strong values instilled throughout the Scouting program.”

He has also served as an assistant debate coach for his former high school, and judged debate competitions for the Metro Debate League in Grand Rapids.

During undergrad and into law school, Conklin spent four years working for a security firm, primarily as a Fire Safety Officer at the Grand Rapids Home for Veterans.“I enjoyed being able to visit with the members and to hear their stories while giving back to them by ensuring their safety,” he says.

A member of VFW Auxiliary Post 702, he finds it rewarding to work alongside dedicated individuals that share in his passion of giving back to veterans, including volunteering at the Grand Rapids Home for Veterans.

“It’s rewarding to volunteer because of the selfless sacrifice so many veterans have made to allowing us the freedoms we enjoy,” he says. “I view it as a way of honoring both of my grandfathers who were veterans.”

Conklin credits family support for his success. “Family is super important to me,” he says. “I wouldn’t have been able to accomplish as much as I have without the support of my parents, my grandma, and my fiancée.”

At WMU-Cooley Law School, one of the activities students can participate in is the moot court...
Read More