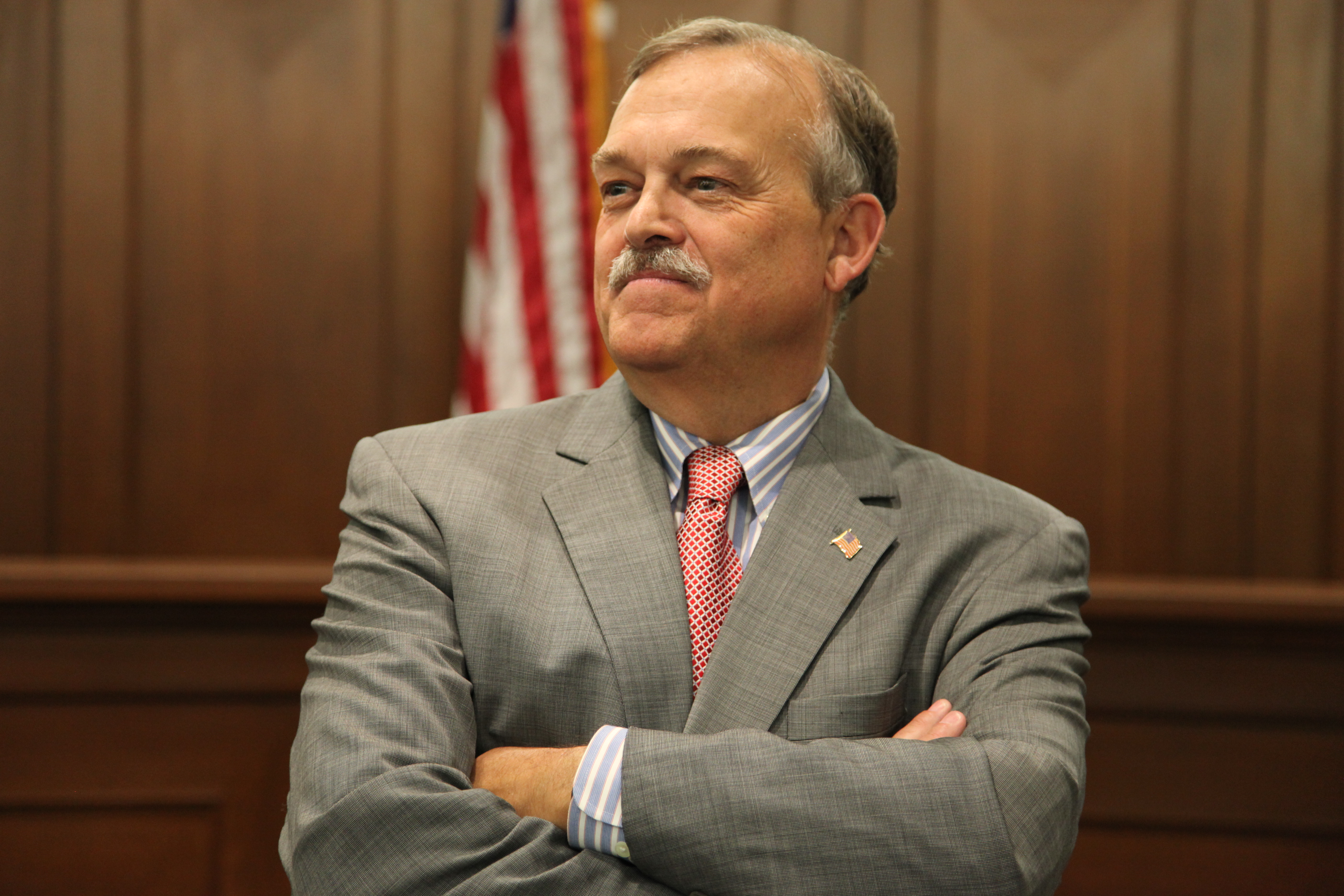 Ret. Brig. General and WMU-Cooley Law School Associate Dean Michael C.H. McDaniel was the keynote speaker during the City of Lansing's Memorial Day Ceremony. Below is his speech from the 2019 Memorial Day ceremony.

On the first Memorial Day,

On May 5, 1868, General John Logan, national commander of the Grand Army of the Republic, promulgated General Order No. 11, which was the first official promulgation of Memorial Day. General Order No. 11 provided that flowers be placed on the graves of Union and Confederate soldiers on May 30, 1868. Logan's Order declared: "Let no neglect, no ravages of time, testify to the present or to the coming generations that we have forgotten as a people the cost of a free and undivided republic."

On this Memorial Day,

Amidst the holiday sales, ball games, beaches, barbecues, and long weekend getaways; let us remember the reason for this holiday and take a moment to honor those who have fallen in battle so that we can all enjoy our freedom.

We pay tribute to the courageous service members that have fallen in service to our country, give immense gratitude to those who continue to serve, and honor the brave sacrifices all have made, and continue to make, for our freedom.

In the simplest possible words, Memorial Day celebrates the lives and sacrifices made by those men and women who have died while serving to defend the United States of America.

Servicemembers fall on a daily basis. According to the latest VA data, 20 veterans die by suicide every day. Of those deaths, 14 are not receiving VA health care. Active duty deaths by suicide were at a record high in 2018. No matter how they died, or where they died, the life, accomplishment and integrity of each of these brave individuals is immeasurable, and worth being remembered in a special way each and every year. That is why we are here.

Memorial Day is a reminder

May Memorial Day be a reminder that we must also do our best to help uphold the peace, and fight for the liberties that the soldiers that defend our country have helped set in place. The soldier is often set as an example and an inspiration for our children, but also for ourselves – an inspiration to never take for granted the blessings we are offered and to fight to defend our country and the liberties that we and our loved ones enjoy.

We all joined the service for different reasons. Some to save for college, others to gain employment, and others to see the world.

But a few days into our service, we realized we were part of something more. A desire to defend and uphold the tenets of the Constitution. To be the champions of freedom.

Every one of us who served, or is serving, took an oath to defend the Constitution. It is my great privilege to teach Constitutional Law at WMU-Cooley Law School downtown. So, please permit me to expound on this point for a minute.

Reminder of our oath to the Constitution

“Federal officials” has been defined to include members of the military. And that is as it should be.

The Preamble of that grand Document contains our Mission Statement: “Establish Justice, insure domestic Tranquility, provide for the common Defense, promote the general Welfare, and secure the blessings of Liberty to us and our children.”

Those two sections of the Constitution, one at the very beginning, and one almost at the end, must be read together. They were intended to be the alpha and omega of the document. The Preamble provides, as I said “our mission statement,” but does so by stating a series of duties.

The body of the document then apportions responsibility: first, between state and federal government, and the between the three co-equal branches of government.

Not to promote war, but to preserve peace.

The motto of the Army War College, and stated by Elihu Root, then Sec of War, when he established the school. It is entirely consistent with the Preamble which states that the federal government is to provide for the common Defense.

“[Our] strength will never be used in pursuit of aggressive ambitions — it will always be used in pursuit of peace. It will never be used to promote provocations — it will always be used to promote the peaceful settlement of disputes.” JFK's undelivered speech to be given November 22 1963.

So, what were our soldiers, sailors, airforce and marines fighting for? They were fighting to protect our country but also to protect our system of government as set forth in the Constitution.

Our adherence to that document, its checks and balances between the three co-equal branches assures that no person is above the law and that all are subject to the rule of law.

If you will permit a personal opinion. There have been news reports that the Commander in chief might pardon those accused or convicted of war crimes to observe this Memorial Day. That sends the opposite message than was intended. It sends a message to our own troops that restraint and respect for the rights of others does not matter.

As Sen. John McCain said during the torture debates:

“This is a moral debate. It is about who we are. I don’t mourn the loss of any terrorist’s life. What I do mourn is what we lose when by official policy or official neglect we confuse or encourage those who fight this war for us that best sense of ourselves.”

Simply put to hold blameless those who have committed war crimes diminishes us as a country and is contrary to our oath to support the Constitution.

Hearkening back to the Civil War

I want to tell you a true story. As of 2014, the Department of Veterans Affairs is still paying a Civil War pension.

The last surviving child of a Union Veteran still receives a small, monthly pension payment 149 years after the Civil War ended. The societal costs of war are long and hard. The emotional scars on the families that bore the sacrifice are longer.

The impact of our 20 years fighting in SW Asia.

As our poet-President Abe Lincoln said at Gettysburg, it is our duty, “for us the living, rather, to be dedicated here to the unfinished work which they who fought here have thus far so nobly advanced…. that government of the people, by the people, for the people, shall not perish from the earth."

It is for us, the living, then:

“All of these men and women up here chose to serve not because they hated the enemies they saw before them. Rather, they served because they loved the people that they left behind. They did it because THEY LOVE YOU.

“God bless you … and God bless the United States of America. With your efforts and His blessing, she will always stand tall in the world.