Law student Bailey Vos: Accelerated Program a perfect fit for someone with a “can-do” attitude

She was born and raised in Grand Rapids and didn’t leave the west Michigan area until she headed east to attend the University of Michigan (Ann Arbor) where she earned her bachelor’s degree. She is an honors scholar on track to finish law school in two years by following WMU-Cooley’s Accelerated Program.

Bailey started her higher education track at the University of Michigan and graduated in 2013 with her bachelor’s degree in Performance Art Management. “I was in the Theater School and loved every second of it.” Her first job out of college was as a producer for a children’s theater group for a year, but she ultimately decided to return to Grand Rapids to be closer to family.

When she was first considering moving back to Grand Rapids, Bailey also thought about the next few steps. Going to law school had always been a dream, but she wanted to be sure. She started looking into law schools in Michigan because she knew she wanted to stay near home. She ultimately decided to attend WMU-Cooley Law School – for a number of reasons. Not only did WMU-Cooley have a campus in her hometown of Grand Rapids, the law school also awarded her an honors scholarship and gave her the ability to take its Accelerated Program, finishing law school in two years instead of three.

Bailey started in WMU-Cooley’s Accelerated Program in January 2015 and hasn’t looked back. “Once I see a goal, I do anything I need to in order to reach it,” Bailey said.

As of now, many of those goals have already been achieved. She’s been able to make the Dean’s List and Honor Roll several times during law school, and once she is finished with her required courses in August 2016, she plans to move to Austin, Texas to do her externship, and ultimately graduate in January of 2017, finishing her law school in exactly two years. 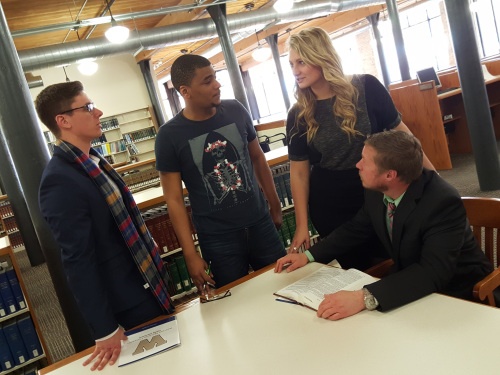 She’s been successful at making time for everything that is important to her, despite her busy schedule. She believes that the relationships she’s formed throughout law school are ones that will last a lifetime. Because of this, she does not hesitate to put a night of studying aside to make time for her family and friends.
“Most people who hear about my schedule think I’m crazy,” laughed Bailey. Yet, if you sit down and talk to her, you are immediately inspired by her positive attitude and endless energy. She’s not afraid to push herself to find her limits. Bailey serves as the Student Bar Association president, managing editor for the WMU-Cooley Law School Law Review, an Enrollment and Student Services graduate assistant, teaching assistant for Constitutional Law, Student Ambassador, Kaplan Head Liaison, and a Grade Appeals Board member and magistrate. On her days off, Bailey works two part-time jobs outside of the school. She also records the WMU-Cooley open house radio ads when needed! She accomplishes all of that on top of a more-than-full class load, averaging 16-17 credit hours per term.
“I love being involved and making a difference,” explained Bailey. “If there is ever a point when my schedule isn’t insanely hectic, I somehow seem to find other things to do! That’s OK though.”
As Bailey would say “Anyone can accomplish anything, if you believe in yourself and if you believe you can.” We at WMU-Cooley believe you can, Bailey.  Keep making goals and helping others. You will accomplish great things.