Kishnee Theus: Learning the Process of Law School at WMU-Cooley

Kishnee Theus figured out that she was going to go to law school during her sophomore year of undergraduate studies. It was at that time that there was a devastating earthquake in Haiti. As a Haitian-American, this affected her personally. She had two aunts who were in Haiti, one an American citizen and the other not.

"It hit our family hard," recalled Theus. "My aunt who did not have citizenship wasn't allowed in the United States. She ended up homeless for two months. We had no way of contacting her. We didn't even know if she was okay. That was it. I decided then that I needed to know more about immigration law and citizen rights. I wanted to help those who couldn't help themselves."

That tragic experience changed the trajectory of Theus' life plan. She not only wanted to learn more about the rights of immigrants, but she want to do something about it. She knew the only way to really make a difference was to "know the law in its entirety and to be a lawyer."

"My application process for law school started in 2016," started Theus. "I have a lot of relatives in Tampa, and one of my cousins started talking to me about WMU-Cooley. She said it was a new school in Tampa, and that she knew some students going who loved the school, and especially the professors. I decided to make a visit to the law school. Once I learned about the flexible program, I was sold." 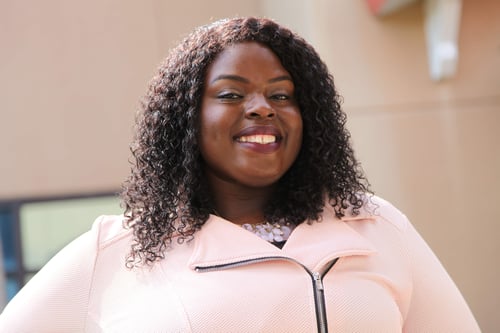 WMU-Cooley was a perfect fit for Theus, but she understood completely that law school was going to be hard, time consuming and a big commitment. She came to class on her first day knowing she would need to "immediately buckle down and learn to understand the process of law school and how everything fits together."

"The most difficult part of law school was understanding the cases," shared Theus. "I wasn’t familiar with case law. Reading cases started out being hard for me because there were many concepts and citations I had never been exposed to before. But once I understood what was meant by everything and how they fit together, it all got much easier. Including learning how to take a law school exam.

"Coming to the Academic Resource Center early on to gather important learning skills was the best thing that I could have done. It gave me insight into the process and best practices for taking an exam. It really paid off!"

Theus was so impressed with WMU-Cooley's emphasis on practice-ready learning that she found herself as a grad assistant in the Center. She says her law school success stems from her ability to ask questions and ask them early.

"I not only met with the professionals in the academic resource center but met with professors. I reached out to everybody. I realized that my success was ultimately on me, and I was going to have to ask a lot of questions, so I did."

Theus finds her role in the Center very gratifying. She feels like she is paying things forward for new students.

"When I first came to law school, I didn't know what to expect," explained Theus. "It was a little scary. I remember walking down the hall and passing in front of the Academic Resource Center. I looked at the grad assistants as the top students at WMU-Cooley Law School. Now that I work in the office, it's so gratifying and such a humbling feeling."

law school students from around the world 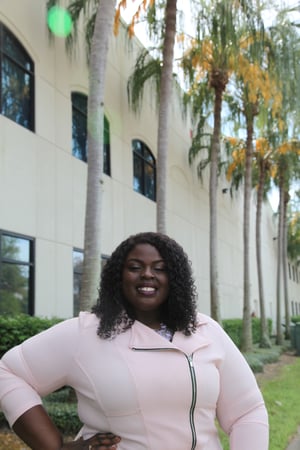 As impressed as Theus is with the skills training at WMU-Cooley, what means the most is the international feel at the law school.

"When I came to law school, I wasn't sure whether or not I was going to see people who looked like me. I was amazed to see such diversity and all the different cultures. WMU-Cooley embraces students from all over the world. For me, it is the best part about the law school."

Theus has her own advice for those considering law school. The first is to visit the law school. She recently participated in one of WMU-Cooley's Open Houses and was part of a panel where faculty, alumni and students helped answer questions for prospective students, or those who were recently admitted to WMU-Cooley.

Theus was intrigued by the types of questions the guests were asking, from wanting to know what classes would be like, or the best ways to be prepare, to how someone should dress in law school.

"One student really touched me because she had been in the military for over 30 years," told Theus. "She had just retired and she wanted suggestions on how to get her groove back after being out of school for so long. I was happy to see such a wide variety of thought from all the people who attended."

"It was a great opportunity for students to dive in and get to know the law school," smiled Theus. "The faculty was there, our dean was there, the president of our school was there. Guests were able to ask anything. Going to an Open House is a great overview of the entire experience and what kinds of things a student could expect during law school."

Theus would say, for her, the key for law school success would be these four things:

The studying process is something else Theus learned in the Center. There are three phases she says that will give you guidance in how everything fits together in law school.

Theus is proud of what she has accomplished in law school, which includes being a Graduate Assistant in the WMU-Cooley Academic Resource Center, Managing Editor and Interim Editor-in-Chief for the WMU-Cooley Journal of Practical & Clinical Law, Senior Associate Editor for the WMU-Cooley Law Review, Member of the Phi Delta Phi International Legal Honor Society, former Public Relations Officer for the Caribbean Law Student Association, and winner of the Melissa Mitchell Moot Court Competition.

She has made her own success in law school and is now looking forward to graduation and a successful career as an attorney, making real impact on the lives of others.