Uninformed Critics Will Not Deter Us From Our Mission, says James D. Robb

#FromWhereIStand is an op-ed forum allowing a voice and stance for our WMU-Cooley community of family and friends. James D. Robb, the law school's associate dean of external affairs and general counsel, is passionate about WMU-Cooley, its history and its mission. He also is not impressed by those with their own agendas who give uninformed criticism and offer unfounded opinions. 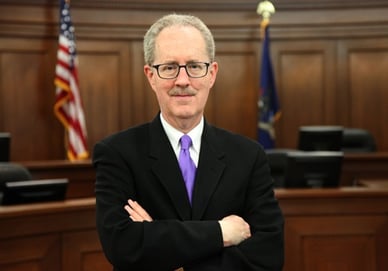 Think about it. Why would someone criticize our School for the recent actions of a lawyer who graduated 27 years ago? Maybe this is more of the recent trend of incivility and bullying in the media and social media, in our case by people who know little about legal education and nothing about our fine Law School.

I think not. Unfortunately, every law school in the country has graduates who get disbarred, convicted of crimes, and engage in misconduct, including ours. The notion that these graduates reflect anything that their law schools taught them or that the law schools condone such behavior in any way is ridiculous. We don’t have to put up with gratuitous criticism. If the commentators actually knew us, they would see that:

In Support of Diversity in the Legal Field

Our Law School was founded on the premise that all qualified applicants should be given the chance. Our access mission allows students of all backgrounds to seek a legal education; to come from near and far; to attend day, evening, and on the weekends; to earn scholarships based on merit; to attend at campuses and at times convenient to them; to take some classes remotely; to attend regardless of whether they studied at the largest university or the smallest college, in a prestigious undergraduate program or a local community college; and to learn from professors who are real lawyers and be served by a staff deeply committed to student success. We are one of the most diverse law schools by race, gender, geography, religion, or cultural background, and we are darn proud of it.

We began in 1973 with 76 students in rented premises atop a print shop in downtown Lansing. We were founded over the active opposition of the so-called law school establishment. A rival dean said we should be a paralegal school instead. I hope his words tasted good when our very first graduating class passed the Michigan bar exam at a higher rate than did the class at his school.

Our Law School has had to scrap throughout our 45 years of existence for every chance to succeed. Over the years, we grew to become:

For those of you who have been following the recent ABA action, know that this was nothing we have not faced before. Over the course of our history, the ABA has reacted negatively to both aspects of our mission—teaching our students how to be lawyers and giving those who dream of becoming lawyers a chance to do so. They have opposed every innovation and impeded the implementation of every initiative, ultimately treating people like a number.

I am very pleased to report that the Accreditation Committee of the American Bar Association issued public notice that the Law School has demonstrated compliance with Standard 501(b) and its related Interpretation 501-1. This decision means that we meet all ABA Standards and Interpretations. Throughout this process, we remained approved by the ABA, and we never received a sanction. Rather, the recent decision reaffirms our approved status, which we have held continuously since 1975. More specifically, the decision follows an interim monitoring process that began in 2016 during which the ABA also found that the School meets the standards and interpretations governing:

That interim monitoring began only five months after the ABA completed its regular, full-fledged site evaluation review, required of all law schools every seven years, where it likewise determined that the Law School complied with all Standards.

We have succeeded because we have attracted the kind of students who want to become our style of lawyers—those who know how to practice law, who work hard, who persist, and who represent their clients with competence and zeal. Those students came to us from across the nation and all over the world and have returned to serve their communities with distinction.

The quality of a law school should not be measured by media rankings or the subjective opinions of uninformed commentators or self-anointed "experts." It should be measured by how well the school meets its mission. We know our mission, we abide by it, and we succeed at it. In meeting the mission, WMU-Cooley became a great law school.

We hear you, alumni and friends of our great law school. Please submit your #FromWhereIStand stories using the button above and we will work to make sure your voice is heard in this forum.

This blog was originally posted January 27, 2017. WMU-Cooley, as a certified veteran-friendly...
Read More

WMU-Cooley, as a military friendly and designated Yellow Ribbon School, talks to its military...
Read More