Read how WMU-Cooley Law School graduate Mitch Zajac became a Good Samaritan during an early morning commute to work as an attorney with Butzel Long in this Legal News story by Sheila Pursglove below. 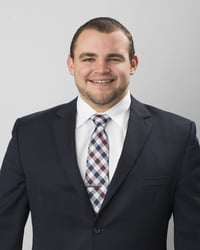 With a background in automotive engineering, and now an attorney whose focus includes automotive law, Mitchell Zajac is very familiar with vehicles. But nothing could have prepared him for a recent hair-raising automotive experience on an early morning commute from Howell to Butzel Long’s Detroit office.

The roads were icy, and as Zajac rounded a curve on the freeway, he came across an accident that had happened moments earlier. One car was smashed and another was flipped on its back, trapping the driver inside. Pulling his own car over, Zajac then helped the trapped driver out of his vehicle and up the embankment to safety, staying until police and emergency personnel arrived on the scene.

Then he continued his commute, and put in a 14-hour workday.

“I was simply in the right place at the right time,” he says. “I’d like to think most people would help others who are in a literal or proverbial bad spot – at least I’d hope someone would help me if I were in that position. I don’t know if it was anything that motivated me to stop and try and help, it was simply the right thing to do.”

At Butzel Long, Zajac concentrates his practice in the areas of automotive, intellectual property, regulatory and emissions compliance, and sports and entertainment law, and is a registered patent attorney with the U.S. Patent and Trademark Office.

He started his career trajectory with undergrad and master’s degrees in mechanical engineering from Western Michigan University and an undergrad degree in German from the WMU Lee Honors College, where he now serves on the Dean’s Advisory Board.

He then spent 5-1/2 years as an engineer at Fiat Chrysler Automobiles (FCA), pursuing a passion launched at a young age when he was part of the creative problem solving organization “Destination Imagination” – and still volunteers for DI. He also is an adjunct professor in engineering and project management at Trine University, in Angola, Ind.

“Understanding how things work has always been a passion of mine,” he says. “The complexity of machines, understanding how different components interact with each other, trying to understand how and why devices and machines break, and, at my core, trying to innovate new ways of solving problems is really exciting to me. Cars were the avenue I landed on for how to best put these passions to use. It started with tinkering in the garage with my dad, and eventual transitioned to a great start to a career at FCA.

“What I love most about the auto industry is the complexity in engineering and the complexity in business, and how they fit together,” he adds. “Part of me is ‘the car guy’ who loves getting in the weeds about design and innovation. The other part is ‘the business guy’ who is interested in brand development, protection and growing in the market by meeting demands and projecting on how to best meet the undefined further demands.”

Zajac headed to WMU-Cooley Law School in 2013, while continuing to work at FCA.

“Law was a very natural transition for me based on wanting to continue developing ‘the business guy’ in me,” he says. “Engineers are often tasked with developing the how-to relating to a problem or opportunity. Going to law school was about developing the tools in order to understand, and ultimately influence, the ‘why.’”

In law school, Zajac developed relationships with professors, students, and administrators that he notes have proved invaluable at both a personal and professional level.

“WMU Cooley professors have been ‘in-the-trenches,’ so to speak, and because of that they provide a true practical perspective to not only the study of law but the development of skills on how to actually practice the law,” he says.

Zajac, who is a member of the Michigan Chapter of the American Inns of Court and the Detroit Bar Association, started at Butzel Long as a summer associate before joining the team full time last May, and enjoys the “interconnectedness” of his practice areas.

“IP is all about protecting one’s innovation. Automotive is putting one’s innovation to use and applying it to solve problems or to advance developments in a specific industry. The automotive industry requires incredible teamwork. Sports and entertainment law exists to protect activities and people involved in teams and careers set on a performance stage. Regulatory compliance requires an understanding of the rules of the various games being played — automotive, trade and tariffs, and so on. Patent law itself is regulation — the processes for receiving and then enforcing a patent is very complex and requires a great deal of focus, creativity, and attention to detail to do it right,” he says.

“In the most general sense, I enjoy these areas because they represent the need and opportunity to help people and companies bridge the gap between their passions — from innovation to sports and entertainment — and the rest of the world by simply helping them navigate the rules, helping them protect their own innovation and brand, and being part of the team along the way.”

Zajac is a native of Holt, near Lansing, and his entire family hails from that area.

“Many of my motivations in life come from my parents and grandparents – intellectuals, car-guys and carpenters, business people, people who care about others,” he says. 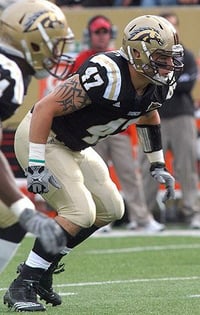 A four-year starter for the Western Michigan Broncos and now a coach and defensive coordinator for the Howell High School varsity football team, Zajac notes his football background has helped him become the person he is today.

“Sports require teamwork, dedication, trust, perseverance, hard work, leadership—and the list goes on,” he says. “Being an engineer requires this, and being a good attorney requires this. The clichés of “Together everyone achieves more” and “it doesn’t matter who gets credit as long as it gets done” are true in sports and they are true in the successful practice of that law.”

President of the nonprofit Association for Child Development— that facilitates millions of dollars in federal funds annually through the USDA Child and Adult Care Food Program—Zajac strongly believes in community involvement and in giving back.

“I believe people poured into my life to help me become who I am, and I feel obligated to do the same,” he says. “I’m passionate about changing the state of things from how they are to how they really should be. I think people deserve opportunities to grow and learn and become something. I don’t think people deserve to be given any ‘thing’, but they do deserve to be given the chance to do and be whatever it is they want to be.

“That’s why I coach, that’s why I’m involved with ACD, and that’s why I find other ways to volunteer. ACD is a great organization that facilitates millions of dollars annually to provide food for kids who otherwise may not have a single meal in a day, let alone a healthy meal. It’s full of people who care about kids and I’m lucky to be a part of such an organization.”

In his leisure time, Zajac enjoys tinkering with his Jeep, and taking it off road into mountains and sand dunes; and has explored the United States on his motorcycle. A handyman, his various projects include building an in-wall bookshelf to house his thousands of books, building a movie theatre in his basement, and planning his next big project.

“I enjoy a good binge-watch of ‘Blacklist’ or ‘Suits’ or ‘Quantico’ or ‘Scandal’ – I even have a ‘white hat’ in my office,” he says. “I love a big bucket of popcorn at the movies or a random dive restaurant with friends. Trying something new is a great hobby of mine.”