The Center is housed with the school’s Debt Relief Clinic and provides legal assistance in the areas of family law, immigration, foreclosure defense, bankruptcy, and estate planning. One of 10 such centers supported by local Catholic parishes and private contributions, together they serve approximately 3,300 people every month. With its new on-campus location, St. Michael’s can continue to fulfill its mission to serve the underserved, and, says Shea, to provide outstanding, hands-on opportunities for WMU-Cooley students to gain valuable legal skills.

“It’s a wonderful experience for our law students because it puts them out there where the rubber meets the road,” he said. “We are actually dealing with real cases, so it’s a wonderful way to learn what it’s like to be a lawyer; to learn what you don’t learn in the classroom.” 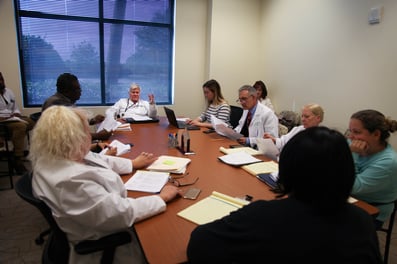 The deep commitment of St. Michael’s to giving back to the community and doing its part to make life better for others, is shared deeply by Shea, a powerhouse in litigation, volunteerism, higher education, and service to country.

A professor of Maritime Law at WMU-Cooley, Shea has served in the U.S.C.G. Auxiliary since shortly after the terrorist attacks on 9/11. Because he received a law school deferment from the Vietnam War, Shea enlisted in the Navy Ready Reserve when he graduated but was never called up. After 9/11 he wanted to step up and do his part.

“I’m an old ship captain and served as a harbor pilot, and my first love is the sea. So, after 9/11 I was renewing my captain’s license and I called (the U.S.C.G.) and said, ‘I want to be patriotic; if you need somebody let me know,’” recalled Shea. “I finally got around to meeting my commitment as an American citizen.”

More than 15 years later, Shea has achieved the rank of Commander and is the legal officer for Florida’s west coast, which includes about 650 “souls” and 20 different Coast Guard Auxiliary Stations. He also directs the operations of St. Michael’s and teaches Maritime Law at WMU-Cooley. This melding of military and law, said Shea, makes

for a very well-rounded teaching and serving platform. He uses his military

experience in the classroom every day an d stands at the helm of St. Michael’s, running it with professionalism tempered by kindness and caring. In this way, clients, student externs and volunteers all get the most possible benefit from St. Michael’s.

One grateful student is Patrick Masalon, a third-year law student who, after serving an externship at St. Michael’s in 2017, returned this year as a volunteer. A former law enforcement officer, Masalon, has had years of experience in court, but acknowledges being on the defense gives him a different kind of feeling about the law.

“During my externship, I had the opportunity to go to court with Professor Shea, see him in action, assist him at the table, and have the privilege of addressing the case,” said Masalon. “I know every student would like to have that kind of experience, sitting in court with opposing counsel willing to beat you up and you stand and defend your client. It’s a wonderful feeling!”

Masalon plans to graduate in April, but says he also plans to return to St. Michael’s to continue giving back to the community. 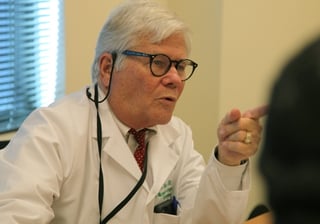 Another third-year student, Amanda Droleski, just began her externship in January but is already gaining from the experience. As someone who has worked as a paralegal on the corporate side of law, she said she feels working with Shea and with the sometimes-difficult clients, will without doubt help her become a good lawyer.

In answer to this question, Why does your office wear white lab coats, Shea had three good reasons:

Going forward, Shea will continue as Captain at the helm of St. Michael’s, helping the needy, abused and underserved, while educating and training the next generation of lawyers. Also true, according to Masalon, is that because Shea is such an exceptional man doing so much for others, when he does someday arrive at heaven’s pearly gates, “His reward is going to be great for all the good he’s done!”

Learn more about WMU-Cooley's clinics and externship opportunities, just one of the ways students benefit from the law school's dedication to practical legal scholarship and skills training.