Advocating for animals is a passion and commitment for WMU-Cooley law student Alicia Prygoski.

Most recently, she received an Advancement of Animal Law Scholarship from the Animal Legal Defense Fund.

The national scholarship is awarded to law students based upon their demonstrated commitment to the mission of the Animal Legal Defense Fund, which is to advance the interests and protect the lives of animals through the legal system. Alicia was one of four ALDF award recipients nationwide.

Alicia was thrilled to win an Advancement of Animal Law Scholarship, but was even more excited about the opportunity to compete and network in the annual National Animal Law Competitions held in March 2015. 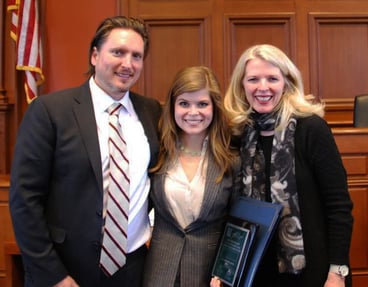 According to WMU-Cooley Professor Dennis Cichon, “Alicia is a very professional young woman who displays an exceptional commitment to her studies.”

That commitment especially extends to her love and passion for animals. The competition really gave her a flavor for the kinds of things she may encounter in a career dedicated to animal advocacy.

“I was tasked with drafting and lobbying for an anti-animal bill in a mock situation where I was a Representative for a fictional Farm Bureau type organization,” Alicia explained. “Once I made it to the final rounds, the problem’s author turned the tables on us, and then I had to lobby as a representative of an animal welfare organization to kill the very bill I had drafted! I ended up getting second place overall, and an additional award for the ‘best bill and fact sheet.’ The competition was a great experience and I got to network with several individuals who have successful careers in animal law. I even got an offer to complete my externship with the Humane Society of the United States Farm Animal Protection Policy Team in Washington D.C.!”

Alicia plans to use her law degree to advocate for animals through the legislative and policy arena, lobbying to pass animal protection-oriented legislation. Alicia is passionate about helping all animals, but she would like to focus her efforts, in some capacity, on advocating specifically for the welfare and protection of farmed animals.