Erin Geschwendt’s law school path would challenge the heartiest of souls. Several years ago, the young wife and mother enrolled at the WMU-Cooley's Grand Rapids campus. At the beginning of her third semester, she lost her beloved father, and found herself trying to run his business, wrap up his estate, deal with her grief and be a good mom and wife, all while continuing to attend law school. 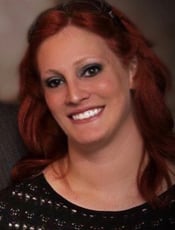 When Erin entered law school, she had only one goal, to make Law Review. “When I came to law school, the only thing I knew was that I wanted to work for the Law Review. After earning editor-in-chief, I hit a road bump.” Erin learned that the topic of her paper had been “preempted.”

Justice Kennedy decided the answer to her thesis, making her paper ineligible for the prerequisite necessary to obtain her coveted Law Review position. There was insufficient time for her to amend her paper or write a different one.

The rub was that the only way she learned her paper was preempted was because she changed the wording in her search engine inquiry. The preemption only showed in the search results when very specific words were searched. Erin knew that it was unlikely that anyone else would discover that her paper was preempted.

“I could break the honor code, get my dream job and get an A on my paper, and likely no one would have ever known. Or, I could comply with the honor code, get a lower grade and lose my dream job.” Erin chose the painful, but honorable path. “Every single day since I lost editor in chief, I proudly looked in the mirror knowing I did the right thing.”

Erin is guided by the prayer of the famous attorney, Sir Thomas More, who ultimately gave his life after choosing to do the honorable thing:

Lord, grant that I may be able in argument,
Accurate in analysis, strict in study,
Candid with clients, and honest with adversaries.
Sit with me at my desk and listen with me
To my client’s plaints, read with me in my library.
And stand beside me in court, so that today I shall not,
In order to win a point, lose my soul.

In our day and age, some would question Erin’s decision, “no one would find out,” “don’t you want to be a winner?” Sadly, some might even apply the label “naïve” believing no one “gets ahead without cutting corners.”

But Erin knows history. And she knows human nature. Which does not change. Surely Sir Thomas More received similar advice when choosing to openly disagree with his benefactor, Henry the VIII: ‘Don’t rock the boat,” “Keep your head down if you want to keep it.” But More didn’t. He believed the King’s desire to divorce Catherine of Aragon was the wrong reason for England to split with the Catholic Church and the Pope in Rome. More lost his life – literally his head – for his principles. Some would say the Reformation was inevitable and that More made an unwise decision during a difficult season which accomplished nothing.

People who make wise decisions in the circumstances by not compromising important long-term principles are not written about, venerated, and made the subject of a movie, hundreds of years after their lives. There is a reason Sir Thomas More lives on to inspire many generations of people to be better people.

For the same reason that Erin Geschwendt will live on to inspire others to be better people for many years to come.