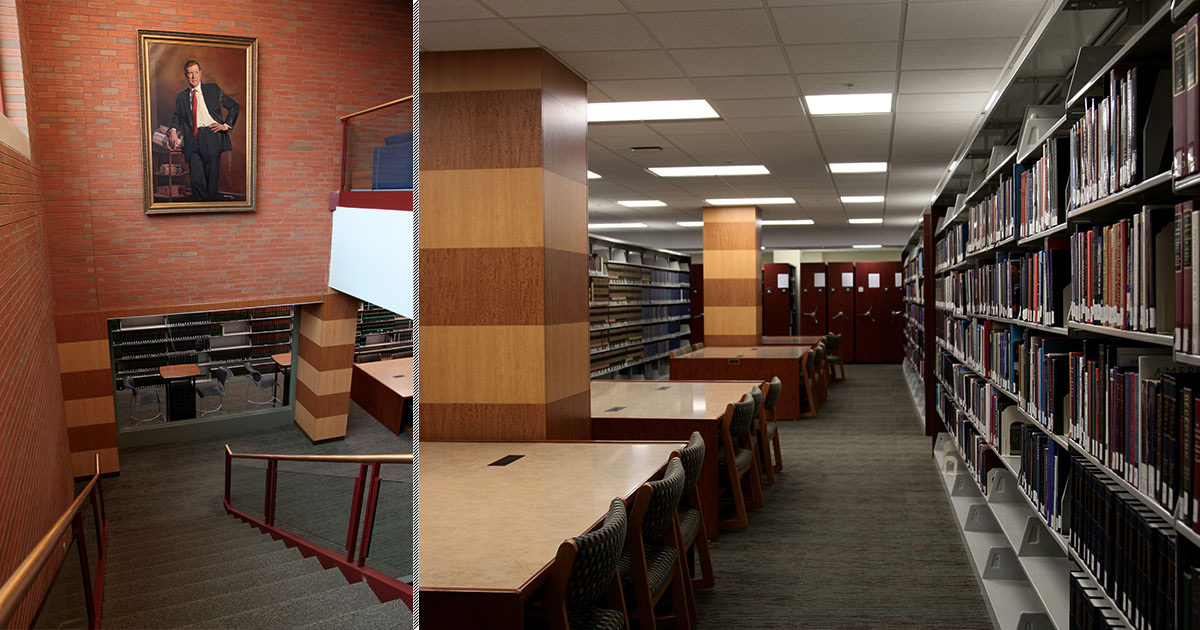 On January 4, 2021, the Brennan Law Library on the Lansing campus opened in a new location.  Gone are the days of endless miles of shelving and study carrels in every corner to meet the needs of any type of studier. The new space is compact with movable compact shelving housing most of the collection.

There are 10 study rooms, one of the most important spaces to replicate as close as possible from the old building since they are the most coveted space by students.  There is a mixture of tables and carrels to study at, just like the old space, and some are as tucked away as possible to provide a quiet sanctuary for those who need it. If you had never been to the old space, you would think this is a very nice library. If you were a regular in the old space, you would think the new space is nice but definitely different. The feel is similar since the furniture is all repurposed.  It certainly has the Cooley look and feel from all the branch libraries we had built over the years, including some of their furniture.

Maybe what is most comforting to me, as a nearly 27-year employee, is the staff. They have made the move in what appears to be a seamless transition. Even though they have reviewed tens of thousands of books, packed thousands of boxes, and had their workspaces in major upheavals for nearly 18 months, they seem as approachable and unflappable as ever. Without a beat, reference librarians continue to make classroom appearances and work diligently on faculty liaison work. The technical services staff had taken on the Herculean task of consolidating four libraries into two and the significant reduction in print materials. Thousands of records were dealt with in Coolcat, the online catalog, to update it and keep it the useful tool that it is.

An employee from another department commented on how cozy the space seemed which is ironic in the pandemic fueled world we are living in.  There is truth to that statement. The new space is comfortable and calming just like the old building but less cavernous. In a basement, there is a high level of lighting to dispel the darkness that seemed to exist in the lower level of the old space. While there has not been a grand opening, one is not necessary. The move was seamless to most with patrons feeling as though they always had been coming to this new space. Services were interrupted due to Covid, not the move. Like comfortable, worn jeans, the atmosphere was close enough to the old space that you might just think we had been here for a long time. The 1st-floor service desk is familiar. The counter is made of black granite just like in the old building, but in actuality was the desk from which Vivian Jackson-Boko answered phone calls for nearly 20 years. The lower level reference desk is actually a sun-filled space at certain times of the day which is reminiscent of the Strosaker room. This was the former bookstore. The first-floor study space has large windows overlooking the street and all its activities.

Ultimately, a modern academic law library is far more than just books. It is the community space that it creates for the students. It is a strong staff that can help users meet their research needs.  It is an online presence that makes books available 24/7. The new Brennan Library does that and more. It preserves the past with an archive chronicling the history of the law school and faculty publishing accomplishments. It provides outreach to Research and Writing departmental courses, teaches for-credit research skills electives, and has a front door on the first floor of the Cooley Center, welcoming anyone who passes by.

Change is difficult and often messy, but it pushes us to new levels of success. The library staff and space have certainly adapted to change in a way that will continue to serve the school by offering services and study spaces that are second to none. Welcome to the new Brennan Library!

(This is the first in a series of blog posts reflecting on the Cooley Law Library, its collections, and services as well as the people that bring it to life.)