Golf Outing is a win, win, win for team of WMU-Cooley graduates

If you are a golfer, then you know that summer is golf outing season.

But for golfer and WMU-Cooley graduate Vincent Welicka, it really means it’s time to join up with his fellow graduates and friends for his law school’s annual alumni golf outing – in fact, for him and his team, that’s every summer since it started 26 years ago.

“It’s gotten to be an obsession for our team for a lot of reasons,” smiled Welicka. “Initially our group started going to the golf outing because we had become friends while I was a referee in Livingston County. Working together there we soon realized we were all Cooley graduates. Participating in the alumni golf outing was like a reunion. We’d meet up as a team and get to have fun with everyone we knew from law school days. Three of our team members,Tom Halm, Dave Prine and I, have participated in every one of the golf outings.”

This obsession with golf wasn’t always the case. In fact, Vince Welicka had never played the game until he came to Cooley.

“I thought chasing a ball around a field to put it in a little hole seemed sorta stupid,” Welicka remembers with a laugh.

Then he met Kevin Fitzgerald in his first law school class. It happened that he was from his own hometown of Binghampton, New York – and he was an avid golfer. 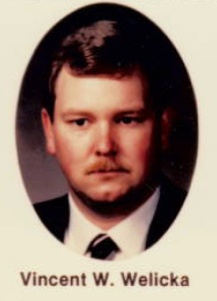 “Kevin changed my mind about golfing,” chuckled Welicka. “He told me, under no uncertain terms, that, ‘if you are going to be a lawyer, then you will need to know how to play golf! Kevin really did teach me the game. My first golf outing was at the old Waverly Golf Course in Lansing. I only had to rent clubs that one time though because I was able to purchase a set of used clubs being sold at a garage sale at the house across the street from me when I was dropped off that day!”

“In retrospect,” reflects Welicka, “I guess you could say that my entire golf life has revolved around Cooley.”

“Participating in the golf outing is really a win, win, win,” proclaimed Welicka.

“One; it’s the camaraderie and friendships that make this event so great. The entire team gets a kick out of golfing with each and catching up. We also have a good time talking to the other participating Cooley graduates and professors.

“Two; it’s simply a great event – well done, down to the last detail. Always a nice venue – from the first one at Royal Scot to the Lansing Country Club, which we’ve enjoyed for the past several years. We have a blast!

“Three; the event provides help to benefit students. We have fun and help others. What could be better? It’s one way I can also give back to my alma mater.”

If you ask Vince Welicka what stands out for him about the golf outing over the years, he responds with his usual matter of fact humor peppered with a dash of reality.

“Honestly, the one thing that really sticks out in my mind is that in the good old days we could actually win,” Welicka surmised. “We’ve taken home longest drive awards and even taken home the team tournament trophy a couple times.  This year, I remember being pretty happy with how I was hitting the ball, until I heard that I was 150 yards behind the longest drive winner! Participating in the golf outing today is not about winning anymore, it’s enough to just get out there, do the best you can, and have fun.”

After thinking about it for a minute, Welicka really only has one regret; “The only disappointment I have is that the next alumni golf outing is now a year away! 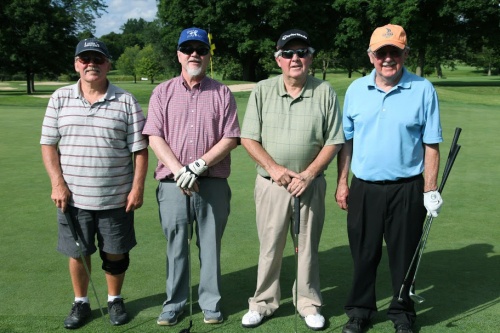