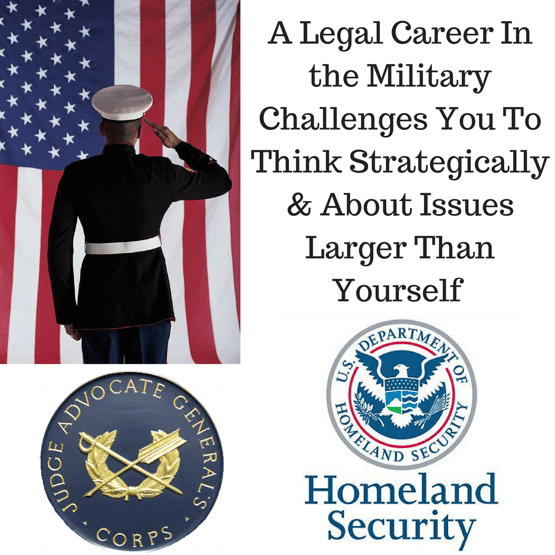 Brigadier General Michael C.H. McDaniel is a Professor of Law at Western MIchigan University Cooley Law School. Michael McDaniel also most recently served as the Deputy Assistant Secretary for Homeland Defense Strategy, Prevention and Mission Assurance. His extensive experience working in Homeland and National Security brought him to WMU-Cooley Law School to start the Master of Laws (LLM) Program in Homeland and National Security Law, a very unique program within the United States.

In speaking with Michael McDaniel about his career in the military and being a JAG officer, he was quick to say that working in the JAG is not like Tom Cruise in A Few Good Men. As a JAG officer you do get to wear a dress uniform while in the courtroom and you have some really interesting legal issues that deal with but the drama of a national security case as seen in many movies is fairly rare. The unique part of the position is that not only are you working all of the criminal cases that an attorney would be doing but you also have the Uniform Code of Military Justice to coordinate with as well as you consider your cases which typically include such issues as:

Michael McDaniel stated that as a JAG officer he was able to gain amazing trial, real-world experience from the very first day.

Looking back on the journey that he went on in his own career, he reflected that he started at St. Bonaventure University. At the end of his undergraduate experience he attended law school at Case Western Reserve University School of Law. Michael McDaniel had the opportunity to be hired as an attorney in Detroit and then after some time there, he moved to working for the Attorney General of the State of Michigan. After a number of years in this position he was asked by the National Guard to be a Judge Advocate (JAG).

One of the interesting cases that Michael McDaniel reflected on was Harris v. Missavage, a case where the Feres doctrine was brought into question as it related to the National Guard. You may remember this doctrine, especially if you had listened to the interview that I had earlier in January with Larry Nolan. In this case, he found that members of the National Guard were no covered when it came to military immunity. While the case was initially defeated, it was appealed and the Court of Appeals then created a new standing for National Guard members called intra-military immunity.

After 9-11, he was the first person to be tasked to lead a task force of State of Michigan employees and attorneys to look at all the laws in Michigan and find where the gaps were when it came to national security. The state of Michigan had no anti-terrorism statutes at that time. As a part of leading this task force he led a team that proposed 35 pieces of legislation in which 31 were enacted.

Why is law school a great place for military veterans?

Michael McDaniel stated that when you are in the military as an officer you are typically a bright young woman or man and you understand how the strategy works. You typically have the ability to see how things are connected. Michael McDaniel shared that if you go to law school  you gain a better appreciation for the underpinnings of the law and:

Also, the reading and analysis that you do in law school is the same in the military, particularly in military intelligence. Professor McDaniel also stated that a military background allows you to look at disparate issues or events and tie them all together into some sort of network, as well as be able to strategically plan.

Being in the military is also a great way to enter a career in federal government as the experiences you have in your service allows you to see how the government works in many aspects.

In the end Professor McDaniel reflected that as a military member you also have a veterans preference in the candidate selection process which is another great reason to connect a legal and military career.

Selection in the JAG

Michael McDaniel stated that being in the JAG is very competitive right now and the Army, Navy and Marines look at their JAG needs on an annual basis.

Michael McDaniel shared that it was important to keep the following in mind if you were thinking about applying for the JAG.

Homeland Security covers a number of different agencies at different levels of government working together toward a common goal. Because there are so many agencies you have to understand each agency, the constraints on the agencies, the laws governing their actions.

Michael McDaniel shared that the LLM in Homeland and National Security Law allows you to focus on these agencies and the interconnections.

Did you like this interview? Are you interested in a career either with the military or with the federal government? Leave a comment below to let me know!